Many Sri Lankans may no be aware of the significant and outstanding contribution of this illustrious son of Sri Lanka and versatile personality. Having served under him in the Royal Oman Police for nearly a decade I feel obliged to set out his contribution and the high esteem he was held by his Majesty, the Royal Oman Police and the people of Oman.

F. Felix Delip De Silva did Sri Lanka proud in the Sultanate of Oman. Appointed Inspector General Of Police and later as advisor to His Majesty on Police Affairs he was bestowed the highest and prestigious awards of the State for his contribution to the Royal Oman Police. He guided the destinies of the Royal Oman Police for over two and a half decades and was highly respected by its people. A multi faceted personality, an indomitable police officer and administrator of the highest caliber, philanthropist, sportsman and above all a human being with rare qualities. It is not easy to cover all the salient aspects of his personality remarkable personal qualities outstanding and commendable achievements. Further to evaluate the significant contribution he made in the transformation of a rather medieval Police force to be a highly mordernised and efficient force and best in the region is no easy task.

The education at St. Aloysius College Galle under the Jesuit priests had a great impact on him. Discipline and devotion to duty which were synonymous with the Jesuits became his guiding principle and in no small measure  contributed to his remarkable success. Felix was proud of his Alma Mater and loved his school dearly. Leving school he took to planting. Adventurous and daring by nature, the life of a planter did not much appeal to him. In search of a more exciting and challenging career he joined the Tanganyika Police Force and soon excelled in his duties displaying a remarkable aptitude for Police duties. He was awarded with accelerated promotions. In the sixties he joined the Royal Oman Police in its fledgling state. 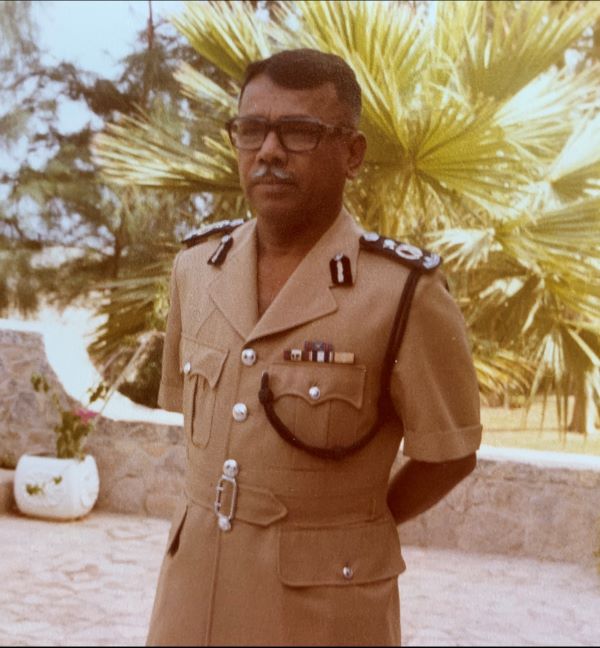 Distinguishing himself with rare dynamism dedication and efficiency much to the envy of the serving British Officers, he was elevated in rank in quick succession.

In the early seventies he assumed duties as Inspector General of Police and Customs. At this time Oman was witnessing an unpredicted growth under his majesty Sultan Qaboos Bin Said. To meet the ever increasing demands of the time he systematically planned for the expansion and simultaneous modernization of the Police Force. Apart from the traditional and conventional police duties, Customs, Emigration and Immigration, Motor Vehicle Registration and administration, Coastal security Desert Surveillance all came under his purview of the Police.

As the Inspector General he wielded powers and was answerable only to his Majesty Sultan Qaboos who had implicit faith in Felix. Felix De Silva  organized the various branches of the force providing for specialization in their respective fields of activity setting up a Marine and Mounted Division as well as an Air Wing to  effectively serve the needs of a fast growing modern society. When he relinquished his duties in early 1983  The Royal Oman Police was recognized in the International Police world as an efficient, sophisticated, highly equipped  force with the most up to date techniques/systems and procedures an abundance of expertise. It was the best in the Gulf States. In fact other members of the Gulf Corporation Council regularly sought the assistance of the Oman Police to train its personnel.

One significant and commendable feature of the force was the close affinity with the people. He zealously attempted to identify the Police Force as “ Friend of the People and it is to his credit the Force remained deeply attracted to the people in spite of traumatic social and economic changes.

For his significant and remarkable contribution to the Royal Oman Police and National Security he was decorated and bestowed the most envious and prestigious awards by  H.M. Sultan Qaboos Bin Said and conferred distinguished citizenship. 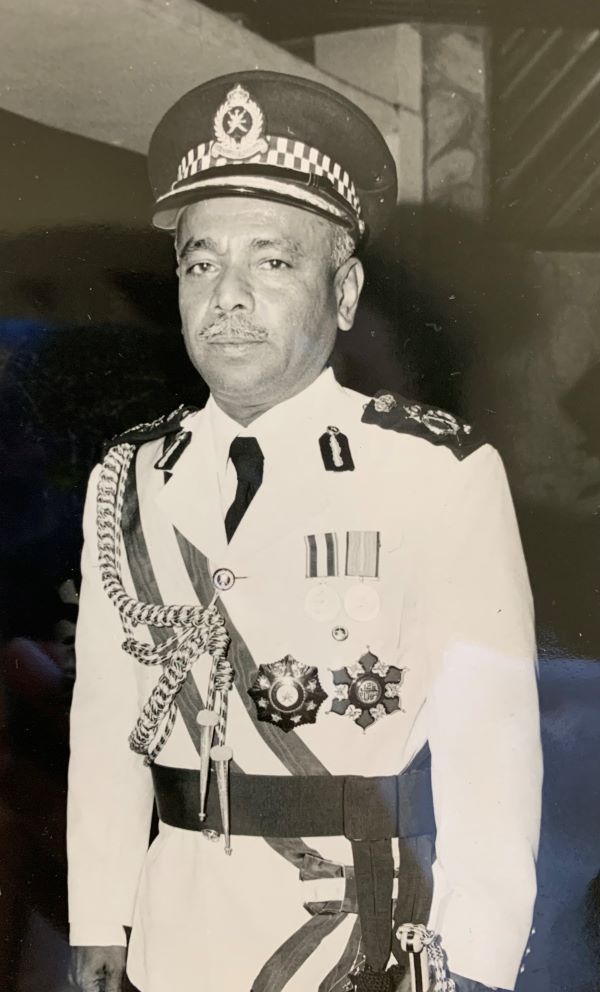 On his retirement appointed advisor to His Majesty on Police Affairs.

And required to undertake some sensitive diplomatic assignments as his Majesty had implicit faith in Felix.

Serving the Royal Oman Police in the late seventies and working at Polce Headquarters where the Inspector General was located I fortunate enough to closely observe his inimitable style of management although somewhat unconventional but most effective and the principles underlying his work and his code of high professional rectitude. He epitomized the model officer and perfect gentleman, in his work he displayed a rare dynamism and exemplary zeal and set a very high standard for others to emulate. While many expatriates including Sri Lankans were recruited to provide the necessary expertise during the formative period of the Police Force he continuously impressed upon them the need to blend with the indigenous culture , to be receptive to the religious susceptibilities and continuously re- iterate the sacred obligation to train the Omani staff to take over duties performed by expatriates. He was firm with those expatriates who failed to measure up to his expectations.

Despite his diverse interests he was essentially a family man. He loved his wife and family. Those who sited the De Silva home experienced the family warmth. Though somewhat of diminutive stature he was dynamic and asserted himself with firmness and authority but with decorum. Daring and adventurous he loved fast cars and go cart racing and won many a coveted Trophy Tanganyika, Kenya and African safari’s and open meets. A devout Buddhist he practiced his religion unobtrusively observing the four “Sathara Brahama” Love, Kindness, Compassion and altruistic joy and Equanimity to the maximum. Humanism and generosity knew no bounds. He gave generously to temples, churches and other places of religious worship in his birthplace Galle to poor relations, friends in need. 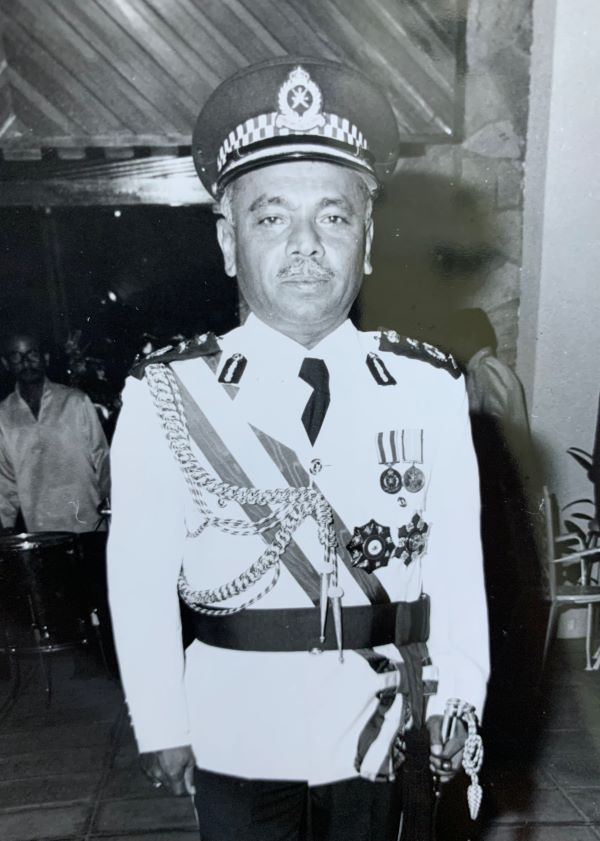 Felix De Silva passed away in the U.S.A. on the 23rd of October 2001 and his ashes were interred in Radella cemetery in Galle. He was 74 years at the time of his death. Sri Lanka lost a great man, Oman a friend who loved the Sultanate and its people. He was a rare personality who completely epitomized the legendary person who would walk with sanctity and equal harmony with beggars and kings. There was no vestige or superciliousness in him. He was loved, admired by both Omani’s and expatriates. The officers in other ranks in the Royal Oman Police  in particular remember with gratitude his significant contribution its progress and the spectacular development of the Royal Oman Police and their personal development while his Majesty has persistently re-illiterated  the gratitude of his people by the outstanding contribution made by Felix De Silva and naturally his magnanimous and generous donation  to “Help Age” Sri Lanka.