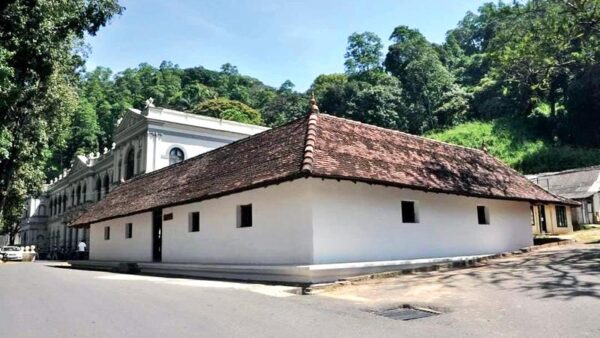 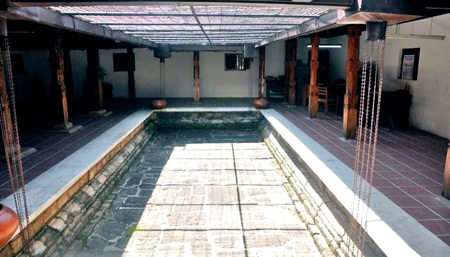 The Temple of the Tooth is surrounded by the Udawatte Forest on the East, the Bogambara Lake on the South, the Old Palace on the North and the Natha Devalaya on the West.

According to the Mahavamsa, King Wimaladharmasuriya I was the first to build a Temple of the Tooth in the Kandyan Kingdom.

The highway passes between the Natha Devalaya and the Temple of the Tooth where the Temple and the ancient Royal Palace are separated by a narrow wall.

It is also known as the ‘Cloud Wall’ and behind it is a similarly built high wall.

There is a moat in the middle of these two walls. Adjacent to the palace is a building called the Medawasala sandwiched between the Kandy National Museum and the International Buddhist Museum.

The Kandy National Museum is also known as Palle Wasala and the International Buddhist Museum as Uda Wasala.

In this background, this article is about the historically and archeologically important Medawasala building, which is believed to have been occupied by the Consort of the late King of the Kandyan Kingdom.

Accordingly, the residence of Queen Venkatha Rangammal, the Consort of the late King Sri Wickrama Rajasinghe, the last ruler of the Kandyan Kingdom who ruled from 1798-1815 AD, is said to be Medawasala. When the colonial era came, this building was called Medavahala.

The building is clearly shown on the map drawn by H.T. Keppetipola in the year 1815.

According to the historical records of the Kandyian period, King Rajasinghe had hidden Queen Rangammal from everyone.According to those reports, only her closest maids had the opportunity to see her and the daughters of several noble families who had remained dedicated to the service of this Queen.

The Medawasala building, which was originally used as the residence of the Consort, was later used for various purposes.

The architecture of this building reflects a special feature that reveals the identity of the Kandyan period. The Medawasala building has a number of wooden structures that are unique to that relevant era.

The pillars, which are spherical and octagonal, are similar in length but have distinctive subtle features.

In addition to the main entrance with the crescent doorway, there are two crescent-shaped doors in the inner chamber, focusing on the doorway of the Medawasala building.

The main entrance to the inner chamber has a single door that opens on the inside. The wooden hinges on the back door of the inner chamber are an example of the excellence of architectural art during the Kandyan era.

When considering the inner courtyard, it’s full of lotus carvings. A drain had been built to dispose the collected water. The stone plaque bearing the inscription “1915 AD” shows the connection between Medawasala and the colonial era.

The Medawasala building consists of an isolated interior chamber. There are four carved stone supporters that provides evidence that there was a bed.

The Archaeological Museum currently exhibits four copper plates which can be assumed to be the defenses found in the building.

Nearby are the remains of a urinal which may have been used in the past. The historical value of the building is enhanced by the ancient floral motifs painted on a red background found during recent conservation work.

The Medawasala building which was preserved by the Central Cultural Fund was converted into a museum and opened in 2016 for local and foreign visitors.