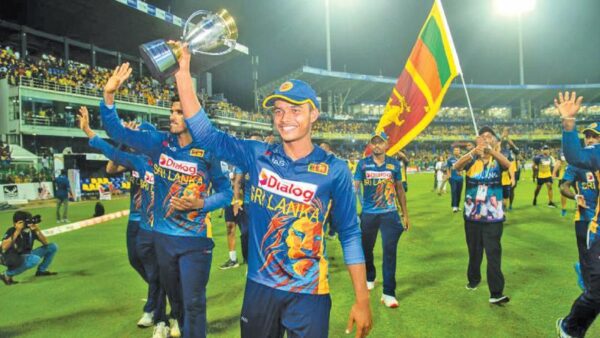 The find of the Sri Lanka-Australia ODI series 19 year-old left arm spinner Dunith Wellalage bowed out with a tally of nine wickets the highest from either side during the five matches. After he made his debut against Australia, Glenn Maxwell, one of the best all rounders in world cricket, gave his blessings to young Wellalage.

His father Suranga Wellalage, the former Prince of Wales skipper, said: “My son remembers Maxwell’ s words. ‘Hey young boy you played your debut game against a top side and that’ s a very rare chance for a young cricketer. You started with a good performance and you have good future and all the best.”

Wellalage recorded his best ODI bowling figures of 3 for 42 in the last game on Friday at the R. Premadasa Stadium.

The promising all rounder came into prominence at the last Under 19 World Cup held in the West Indies when he came under the guidance of coach Avishka Gunawardena who hailed the youngster’s fighting qualities, leadership and commitment.

“This is the beginning of a long journey as a bowler. He has also developed his batting skills which is an advantage at the national level,” said Gunawardena.

Wellalage’s talent was first spotted at St Joseph’s College, Colombo which he captained the team last year and also the Sri Lanka Under-19 team. After the World Cup he had a chance to play the National Super League tournament being adjudged man of the final scoring a fighting knock of 75 during their win against Colombo.