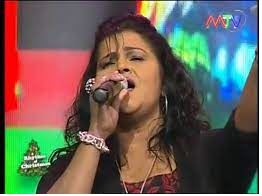 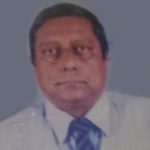 she preserves her signature Sri Lankan female voice, particularly when she sings songs with western melodies. She is basically regarded as a vocalist who sings only six eight tempo songs. But it is not so as she had sung many slow songs. But this is as she performs mainly on stage. She is extraordinary in her ability not to be influenced by Western, Hindustani, or folk music themes. She wanted to be faithful to the expectation of the song and to exploit to the peak the sentimental and emotive properties of the melody, thereby, generating passion and sound perceptions in the minds of listeners.

Her real name is Chandrika Damayanthi Senadhira. As her ‘pet’ name was Manik , as at home she is called Chandi is how Manik Chandrika name had evolved. She is the only female sibling among five children.

Born in Colombo but as mother the youngest child among twelve siblings had decided to live in Negombo where a sister of hers had lived. It is learnt that she was a very shy girl who never liked to be exposed. At the age of six she had participated in school stage dramas when her shyness had vanished to some extent. Her mother had been a keen follower of music who could also sing. Hence there had been a musical environment at home. Manik too had inherited talent to sing. She has confessed her third love was music after home and religion. Her musical career had begun when she was barely eight years old. She had come out of her shell to be more forward ,by singing children’s songs in school when her talent was spotted. Her singing prowess were even highlighted in the ”Mal Piyali’ children magazines She had passed the audition at the SLBC in children’s sector as an A grade child singer, singing Claude Soysa’s ‘Mage Surathal Malli” but never pursued a career at the SLBC

She had been initially taken to a musical show in Negombo where Nihal Nelson, Tony Hassan and Baby Shiromi during a Christmas

time concert at Maris Stellar Convent, where she had been inspired after watching Baby Shiromi sing. Later she had sung Baby Shiromi’s songs at school and small functions. In year 1973 was a turning point in her musical career. A sweep draw had been held in Negombo which was followed by a musical show with the SEAC entertainments band in attendance. The show was organized by one of her uncles. With the greatest difficulty after a small rehearsal on the uncle’s insistence Manik was afforded a prospect to sing the song ‘Konde Namagena”..Her talent had impressed the SEAC experts who had even announced her name as ‘Baby Chandrika’. As they did not have a female vocalist in the band even at the tender age as a teenager she was deployed by the band of course with a lot of confrontation from her mother.Manik had balanced her studies with her singing participating in many stage musical shows. Her tenure with the SEAC band had persisted for eight years. There after the practice had prolonged all through her life to date as a sought after stage solo exponent. She had sung in four languages duetting with AE Manoharan and Tony Hassan, but after meeting her husband Bass guitarist Vajira Fenando , she was counseled to sing mostly Sinhalese songs.

Manik Chandrika has been regrettably tagged as a ‘Baila’ singer as she sings songs to six eight fast beats, which the audiences demand. But she is competent in signing slow numbers mostly to the music composed by Clarence Wijewardena. She is also a lyricist who had composed lyrics for many of her songs and for others. Many people may not have heard her slow numbers and duets.

After singing children songs in year 1973 at the age of just fourteen years recorded two songs for the ‘Silverline’ label, v.i.z.,”Keewe Ne Dutu Da Oya”,”Obe Adare Soya”, to the lyrics of Chitrananda Abeysekera and to the music score of Sarath Dassanayake. Her elder

brother Bandula Senadhira a talented lyricist had composed several songs to Manik knowing her innate qualities like “Mage Loketa Hirui Obai Amme’ and “Punchi Kale Man” relating to her immense love to her mother and her boisterous conduct at home. The music for them were by Rohana Weerasinghe.It has been confessed that Manik visits her mother living in the vicinity daily, taking her meals also indulged in the habit to inform her wherever she goes. Another hit song is “Oben Thora Lokayak” a duet with Rookantha Gunatilleke, the lyrics were also by Bandula Senadhira.

In the decade of 1980 it was a flourishing period for Manik having sung for six cassettes mostly for the lyrics and music of Clarence Wijewardena. One song that was a hit was “Hada Golu Wela”.Before her marriage Clarence had made appropriate lyrics “Mage kathawe Raja Kumara” who had hinted for her growing love. The other songs which are heard over our airways and on stage are “Sepalika’,lyrics by Saman Chandranath Weerasinghe to the music of Stanley Pieris,” Sanda Horen Horen”, lyrics by Chandradasa Fernando ,music by Upali Kannangara”, Oba Dutu Da Sitan” lyrics by Manik Chandrika herself music by Rohana Weerasinghe, “Dinayak Udawee Sinasee”,lyrics and music by Clarence Wijewardena,” “Mage Kathawe” lyrics and music also by Clarence Wijewardena,“Punchi Kale Man” lyrics by Bandula Senadhira , music by Earnest Zoysa, “Tharu Mal” lyrics by Chandradasa Fernando , music by Mahinda Bandara.Manik Chandrika has not made many song videos but a popular video was made for “ Sikurun Kumarune”, lyrics by Renaz Mohamed, music by Udara Samaraweera ,video directors Hafiz Saleem/Nuwan Niriella.

Acclaimed vocalist Manik Chandrika a possesses a unique character never endeavors to pursue her career, possess a melting heart, never hurts anyone even an animal. She believes in God, what she is given she takes, never influences any media or a television channel. She is

very humble down to earth very unassuming, respects seniors in the trade, loved by all. She and Vajira are blessed with a son Pasan Fernando a Lead guitarist who could sing well but reluctant to perform saying time would come.All her fans would bless her wishing her to sing in the same vein entertaining audiences outdoor and indoor. God Bless her.