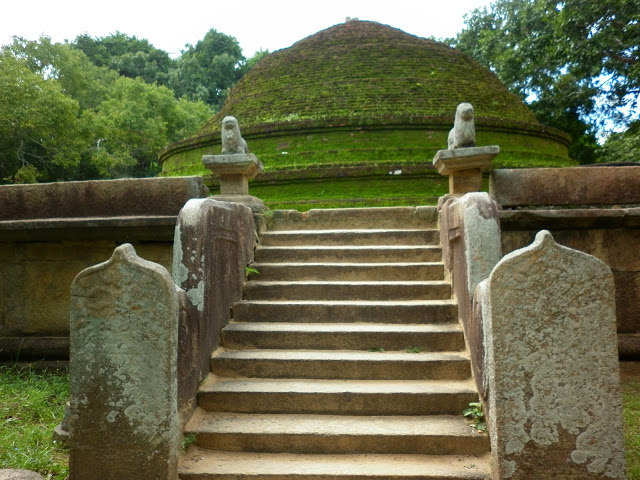 Situated in Lahugala in Ampara District, Magul Maha Viharaya is an ancient Buddhist Temple linked to a historical event. The Temple is located on the northern edge of *Lahugala National Park. 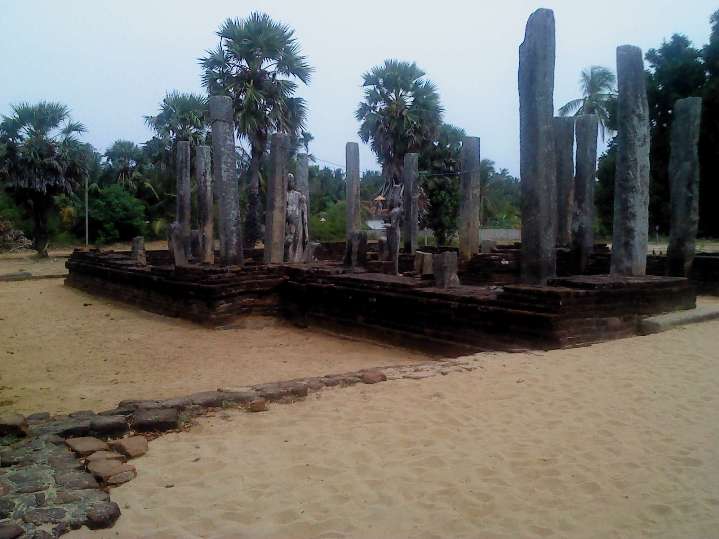 There are ruins of a Royal Palace, a monastery, dagobas (stupas), ponds, an Image House (with a standing Buddha House), bo maluwa (a place where a Bo Tree is situated), a vatadage (circular relic house), a bathing pond for Buddhist Monks as well as a moonstone in the Temple Complex. The moonstone (sandakadapahana in Sinhala) of the Temple Complex is elaborately sculptured and dates to the *Anuradhapura Era. The stupa of Magul Maha Vihara is built on a high terrace and there are three staircases leading to it with images of grand lion guardians at the top of these stairs.

The moonstone in the Temple Complex is different from other moonstones of the Anuradhapura Era as well as moonstones in different parts of Sri Lanka as the outer ring of the moonstone has a carving of mahouts riding elephants.

The entire Temple Complex including the ruins is surrounded by the forests of Lahugala National Park.

There is a causeway to reach the Temple situated across a lotus filled reservoir which surrounds the entire Temple Complex, a mesmerizing sight.

History of the Temple and the Royal Wedding is a historical event. According to legends, King Kelanitissa had committed a great sin by punishing an innocent virtuous Buddhist Monk. According to legends, the gods created strong waves inland to destroy the country (Sri Lanka). To save the country from raging waves of the Indian Ocean (from the wrath of antagonized gods), *Princess Viharamahadevi, legendary heroine volunteered to sacrifice her life to the sea by drifting on a boat. The boat the princess traveled had swept ashore safely at a location near Magul Maha Viharaya in Pottuvil

The Temple is an archaeologically protected heritage monument of Sri Lanka.

Location: The site is situated about 800 meters south of A4 Road west of 307 kilometer post.