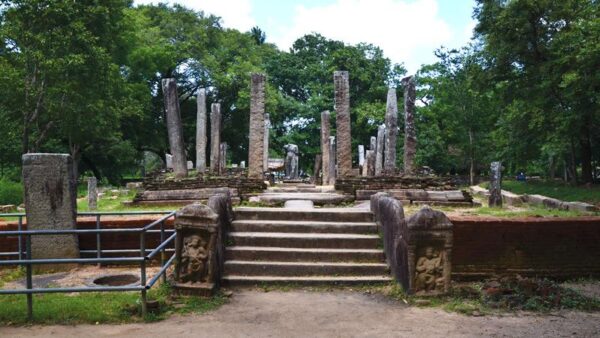 The limestone standing torso of the Buddha in the Image House

After visiting the Mudu Maha Vihara at Pottuvil, we came to the Pottuvil bazaar passing Arugam Bay – the sun-drenched and palm fringed coastal paradise. We had a glorious view of the deep blue sea and the sea spray was most welcoming. A number of colourful guest houses and homely cottages stood on both sides of the road which were once occupied by windsurfers. Owning to the Covid-19 pandemic, the guest houses were closed. 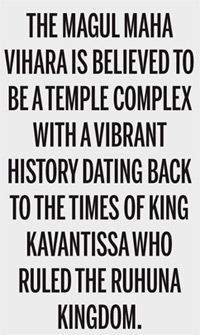 From Pottuvil, we turned left on the Siyabalanduwa – Moneragala road, beguiled by the panoramic views of serene rural landscape. Lush green paddy fields that run as far as eye can see and the shade of Kumbuk trees beside the road protected us from the late afternoon sun.

Having driven around 12 kilometres from Pottuvil, we emerged into the wildlife country of Lahugala-Kitulana and reached the jungle village of Lahugala on the edge of the sanctuary where we were greeted by some villagers who were drying maize on the side of the road.

At the edge of the jungle, the name board of this ancient place indicated to the Magul Maha Vihara. The name of this sanctuary literary means ‘the wedding temple’, an unusual title for a Buddhist place of worship. But, history narrates a tale of the royal marriage between Princess Viharamaha Devi, daughter of King Kelanitissa of Maya Rata and King Kavantissa (205-161) of the Magam Ruhunu Kingdom.

The Magul Maha Vihara is believed to be a temple complex with a vibrant history dating back to the times of King Kavantissa who ruled the Ruhuna Kingdom. However, varying sources claim that King Dhatusena (453-473 AD) built the complex, while various other Monarchs renovated it through the centuries. From all the legends that surround the Vihara, the most arresting is the story of King Kavantissa and Princess Viharamaha Devi.

According to legend Viharamaha Devi, daughter of King Kelanitissa volunteered to sacrifice herself to the sea. She was safely carried over the ocean waves, reaching ashore at a place near Pottuvil, not far from Lahugala, where the encounter between King Kavantissa and the princess led to their marriage. The legend tells that the marriage ceremony was conducted on the grounds of the Magul Maha Vihara where the King had later built the Temple to celebrate the auspicious event.

The Magul Maha Vihara, according to the inscription, was originally known as Ruhunu Maha Vehera. The Vihara appeared to have fallen into ruin for 200 years and lay abandoned in the jungle. At the beginning of the 14th Century, the temple was brought back to former glory by Queen also of the name Viharamaha Devi, wife of Buwaneka Bahu IV of Gampola and Prakramabahu V of Dedigama who renovated and donated many acres to the temple.

Shading our eyes against the late afternoon sun, we first saw an ornamental moat with lotus blossoms, with wide stone terraces leading down to it which showcases the style of the Anuradhapura period. Rectangular in shape, the Vihara was bordered by a moat in ancient times. 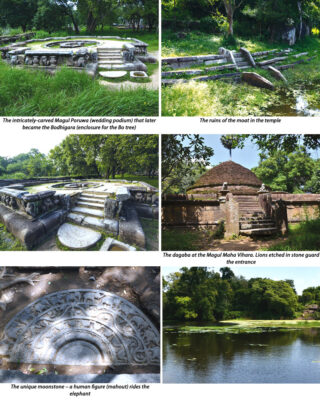 Having crossed the moat by a causeway, we entered the main entrance. We were thrilled by gazing at the marvelous antiquated ruins. We were surrounded by four ceremonial gateways, each one of them carved from stone and adorned with moonstones, balustrades and rows of pillars. Each gateway is aligned with others. The compound is laid out in straight lines. In this compound, one can the see remains of magnificent structures on stone platforms. It is a monastic complex, with an image house, a Dagaba, a Bodhigara, numerous guard stones and a chapter house. Surrounding the central quadrangle is vast area with walkways and numerous stone structures.

The magnificent tank which once gave it life, now strangled by creeping vegetation, runs along the eastern side of the Vihara.

On the eastern side of the temple is a renovated Dagaba located in the temple ground. The four entrances to the Dagaba are well preserved. Each such entrance is flanked on either side by stone carved seated lions perched on stone slabs of the stone railing encircling the Dagaba. To the west of the Dagaba is the much famed Bodhigara – the Bo Tree Shrine – known among people as the Magul Poruwa (marriage podium) of King Kavantissa and Queen Viharamaha Devi. It is believed that the Poruwa was later converted to a Bodhigara that housed the Bo Tree within the circular structure that is similar to a flower.

The surrounding platform has carvings with a frieze of lions and flower vases, which are thought to have been constructed during the middle of the Anuradhapura era.Proceeding to the left where the ruins of what is thought to be the Pohoya Seema Malakaya (Chapter House) stood, we stopped to inspect the moonstone, the carved stone steps and the balustrades that have been marvellously preserved.

The moonstone engraved here is held in much prominence as this is the only one in Asia that has the mahout astride the elephant. Consisting of many half circles engraved with designs such as Liyavel; an intricate design incorporating vine like patterns, lotus petals and animals, the moonstone is deemed as a portrayal of the cycle of birth.

Finally, we came across a massive image house around nine feet in height with a standing torso of a Buddha statue erected in the middle and upright stone pillars around it. The statue is believed to have been broken into pieces in the past. It has been restored by the officials of the Department of Archaeology. The entrance has a plain moonstone and two guard stones depicting the figures of Bahiravaya (guardian demon).

With the sun setting into the far horizon, we had to end our journey at Magul Maha Vihara. We came back to the car park contemplating that we have only managed to scratch the surface of the hidden treasures. After having a refreshing cup of Beli Mal, we proceeded to Kumana in search of many archaeologically important places, which we will feature in future issues.