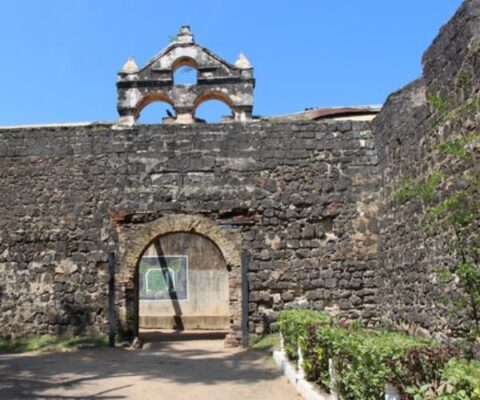 Kalpitya Dutch Fort is one of the main features, in this historic city of Kalpitiya, which is the main trading point in a narrow land that stretches to the north for about 50 kilometres beyond Puttlam, parallel to the mainland. Weatherworn and centuries-old, this majestic structure was built by the Dutch between 1667 and 1676. Kalpitiya was important as it commands the entrance to the adjacent bay, Puttalam Lagoon. The surrounding Puttalam area was one of the major cinnamon cultivation areas in Sri Lanka. The Dutch even constructed a canal from Puttalam via Negombo to Colombo to transport cinnamon from the area. For centuries it stood there gazing at the lagoon and the ocean far beyond. It has witnessed many battles, listened to many prayers and protected many a life. This is the historic Dutch fort of the Calpentyn, today known as Kalpitiya.

The Dutch fort rests within the premises of the Vijaya Naval Base in Kalpitiya surrounded by contemporary structures, overlooking the picturesque lagoon. One of the Navy personnel guided and enlightened us on the significant events and tales around this fortress, taking us a few centuries back in time.

At the outset, Kalpitya used to be a popular hub for Arabian merchants. But they soon had to flee from this area in the early 16th century due to the Portuguese invasion. Thereafter the King of Portugal bestowed their newly gained territory to their clergy, the Jesuits from the Society of Jesus (a religious order under the Roman Catholic Church). The clergy built a chapel in this area and settled down, guarded by their army.

The Dutch built a medium-sized fortress in 1667 which was completed in 1676. They even topped the entrance with a unique pediment to make it look like a church from a distance.

The pediment has three arched holes where the top one used to house a bell, to be rung during emergencies. The wall of the fort is 20 feet high and features an arched entrance right beneath the pediment. The fortress walls were built using limestone, extracted from the locality, and for other structures, bricks were also used. The old wooden doors of the entrance gate were added nearly a century later, as the inscription on them reads, ‘ANNOD MDCCLIX’, in other words, 1759 A.D.

Between the entranceway and the pediment is a relief carving of two elephants with the letters ‘VOC’. It is the logo of United East India Company, a renowned Dutch company that governed the Asian colonies. On our right side adjoining the entrance was a fine bastion, a protruding structure where the artillery was stationed.

The interior wall facing the entrance featured a map on the wall, displaying the important sections of the fortress. Further in was the open area of the lower level surrounded by ancient ruins. Next, we climbed a steep stone-paved slope to reach the upper level. This slope has been used for transporting artillery including cannons. As we walked around the top level, we came upon a row of rooms sprawling beneath us. The rooms now in ruins used to be the storerooms of the Dutch where at times were used as barracks or quarters. Not only the army but the fortress also sheltered a small community of people including officials, devotees of the Dutch church (built outside the fortress) and merchants. To fortify their defence, the Dutch built narrow and low roofed guard posts around the fort.

They even deployed soldiers from African and Asian slave armies, who guarded the stronghold round the clock. After climbing down a stairway back to the lower level we came upon the ancient chapel of the Portuguese, which was later converted to barracks by the Dutch. We could still see the niches, partly crumbled, where the ancient statues used to stand near the altar. Next, we went on exploring the lower level where we had a pleasant surprise. And that was stumbling upon two underground tunnels tucked away at two ends of the fort.

This mini-museum was packed with interesting artefacts. There were sizable shells and conches of various shapes and hues including the rare spiky conches that were shaped like miniature dinosaurs. Next to them were ancient building materials of the Dutch including roof tiles, bricks and limestone rocks. The walls too were adorned with striking framed posters, highlighting the importance of awareness and conservation of marine life.