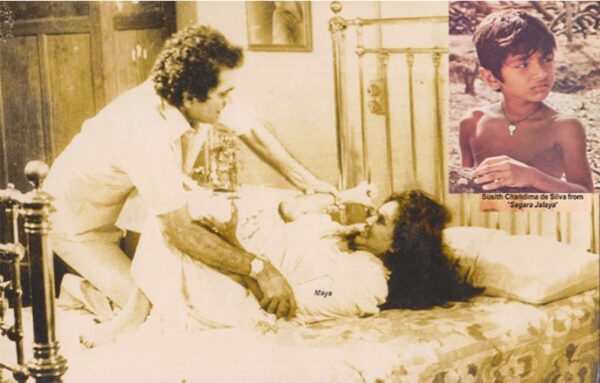 The first Sinhala film I saw was Chandi Shyama. It did not, I confess, leave much of a good impression on me. The second, Madol Doowa, caught my fancies. The third did not catch my fancies, but it left a better impression. This was Sagara Jalaya.

Sumitra Peries’s fifth film, Sagara Jalaya is considered among her best work today. Yet, in another sense, it is hardly considered at all. While critics and writers are willing to ascribe to it the high place it occupies today, they do not pay to it the kind of attention they readily give to Sumitra’s other films, most prominently Gehenu Lamayi and Ganga Addara. That is hardly a fate suffered by Sagara Jalaya only, of course: critics also ignore her later work, in particular Sakman Maluwa, which to me shows Sumitra at her most mature. But in the case of Sagara Jalaya, a more difficult film, the omission seems more glaring.

This is not to say critics have ignored it completely. The authors of Profiling Sri Lankan Cinema, for instance, call it Peries’s “most accomplished film in terms of achieved art.” Vilasnee Tampoe-Hautin observes that it bears testimony to her “commitment to quality.” Ajith Galappati, in the most recent work of research authored on her oeuvre, traces some interesting parallels between the depiction of the woman at the centre of its story and the lives of certain women who figured in Peries’s childhood. Local critics invariably came out in favour and support of the film, even if a few tepid reviews did question its ponderous length and its characterisation of women. On the other hand, foreign journalists and critics were as enthusiastic as, if not more so than, their local counterparts.

Sagara Jalaya won more awards locally than internationally, though this had nothing to do with a lack of merit. That it could not make it to Cannes owing to circumstances beyond her control is a cause for regret, though when one considers that, 15 years earlier, her husband failed to send Nidhanaya to the Academy Awards, it hardly comes as a surprise. In any case, it swept the boards at the national ceremonies: at the Sarasaviya Awards, it topped in seven categories, including directing, acting, scripting, and editing. Lauded at every festival it went to, including in France and India, it took Asian festivals “by storm”, ultimately being selected as one of the 10 outstanding Asian films at Tokyo. Later, NHK bought the film, while German television did the same for Channel Two not too long afterwards.

Yet, despite the praise and the wreaths, the awards and the accolades, Sagara Jalaya does not seem to have captured the critic’s interest in the way both Ganga Addara and Gehenu Lamayi have. Partly, I believe, this has to do with the prominence that popular culture has ensured the other two works: both were based on popular novels, both performed well at the box-office (Ganga Addara would up as the year’s biggest draw), and both were adapted later to television. In other words, the mass appeal of their source texts ensured their mass appeal in a visual medium. Moreover, Peries incorporated popular elements in their stories, guaranteeing their popularity further. These stories had appealed to a generation that had matured after 1956. From them, a vast majority indulged in popular middlebrow fiction: the sort Peries went for, and adapted, in many of her ventures.

These criteria distinguish Peries’s more popular works from her lesser known efforts. What is interesting here is that even when bringing middlebrow literature to the screen, Peries did not let go of her command of visual aesthetics; if one looks for traces of sentimental romance in a work like Loku Duwa, for instance, one confronts a dead-end. Viewed this way, it is more appropriate to consider her work on a continuum, with very little differentiating the popular from the less popular. This has much to do with her fidelity to high standards of quality, a fidelity that, I feel, expresses itself as much in a film like Ganga Addara as it does in a serious outing like Duwata Mawaka Misa. To put that in another way, she has been as deft in Karunasena Jayalath’s territory as she has in G. B. Senanayake’s. In the history of our cinema, I daresay with the exception of her husband, I can’t think of another filmmaker who has handled popular and serious texts as equally well as she has.

Nevertheless, in the pantheon of her work, Sagara Jalaya stands out conspicuously. The most obvious reason for this, perhaps, is that none of her other films departed as much from her usual framework as this did. The rest of her career yields perhaps one other work that bears a comparison: Sakman Maluwa, a film as fundamentally austere as anything she could make by then. Yet coming in around two decades later, Sakman Maluwa displayed a maturity that one could expect from any director at the height of his or her powers. By the time of Sagara Jalaya, on the other hand, Peries had directed just four films, none of which warranted such comparisons. This is why her fifth film is also her best: not only because nothing comparable preceded it, but also because nothing comparable followed it.

What distinguished it? First and foremost, as has been implied earlier in this essay, there was the source text. Peries’s previous work had all been based on popular novels bordering on sentimental romance. In basing them on such texts, she was, in a way, responding to an audience different somewhat to audiences she and her husband had catered to in the 1960s and early 1970s. Karunasena Jayalath and Leticia Boteju epitomised the reading preferences of a new generation and milieu – a Sinhala petty bourgeoisie – and the “middle-browing” of Sinhala literature, in ways few other authors did. In departing from this trend, and opting for a story authored by the era’s pre-eminent novelist, Simon Nawagattegama, she was more or less signalling her desire and willingness to try something new.

In trying something new, she entered a new terrain. By this I don’t mean new themes, but also new milieus and, literally, new spaces. Her previous work had all been located, even if in rural spaces, in areas not too cut off from the metropolis. The link between village and city is quite discernible in them: through the protagonist’s sister who aspires to be an actress in Gehenu Lamayi; through the protagonist’s privileged upbringing in Ganga Addara, and Yahalu Yeheli; and through her transmigration from city to village in Maya. By contrast, in Sagara Jalaya, the director has not only broken off all links with the city from the plot, she has renounced all such links from the very shooting of the film: it marked her first foray, as director, into a territory cut off entirely from the metropolis. In Maya she had forayed into somewhat similar terrain, but never on the scale and breadth of the harsh, sun-baked North-Central Province, the Wanniya landscape, in the film that followed. 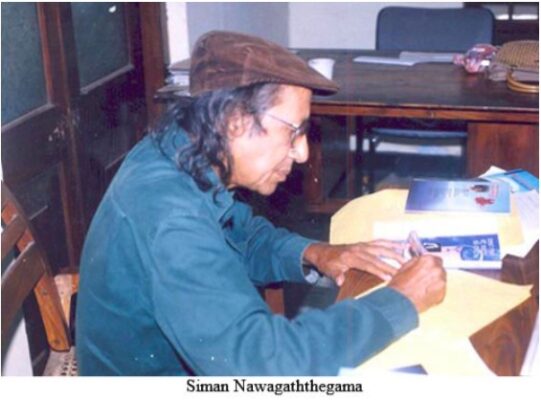 naturally threw up new themes, and new milieus, for her to explore. It’s interesting to compare her portrayal of the protagonist and the world around her with her previous work. Peries’s childhood and adolescence were marked by concomitant bonds with and breakages from her family; she was as close to them as she was distanced from them, whether through death (her mother) or through her sojourns in Europe (her siblings). This rather paradoxical confluence of endearment and separation crops up strongly, as theme and motif, in Gehenu Lamayi: just as Kusum is passionately devoted to her family, her sister Soma is passionately devoted to the world outside her village. What Peries suggests in the last few scenes is that, at one level, both familial attachments and the pursuit of fame can bring despair. This line is not explored as conspicuously in Ganga Addara, Yahalu Yeheli, and Maya, where, in spite of the travails of the protagonist, she finds redemption in familial attachments.

Having abandoned it somewhat, Sumitra Peries returns to this theme in Sagara Jalaya. Ajith Galappatti’s observation that Heen Kella, the protagonist in the story, bears striking parallels with some of the women in Peries’s life deserves exploration. For the purposes of this essay, however, what needs to be noted is that Peries widens the gap between her heroine and her world more than she ever did, and has ever done, in her other films. Even in as bleak a work as Duwata Mawaka Misa, the protagonist eventually finds consolation in the family, despite the hardships she endures. By contrast, in Sagara Jalaya, the separation between the woman and her world is at its most pronounced. Mediated only by her son, this sense of separation strengthens her conviction. In Sagara Jalaya, hence, Sumitra Peries goes as far as she can to emphasise separation in our world – just as her husband would, in Awara Gira.