Third Prime Minister, Sir John Kotelawala, represented Ceylon at the first large-scale Afro–Asian Conference, the ‘Bandung Conference’; in April 1955, in Indonesia. Sir John made headlines when he clashed with the Chinese Communist Leader, Chou-en-Lai, at the Bandung summit where he had an oblique hit, when he said “we have done away with Western Colonialism. We don’t want to start an Eastern Colonialism in its place.” Worldwide, newspapers splashed a photo of Sir John pointing an accusing finger. Indian PM Jawaharlal Nehru, playing the ‘Big Brother’, questioned Sir John. “Lionel, why didn’t you show your speech to me before?” Only for Sir John to hit back, “why should I Nehru?… Do you show me yours, before you make it?” 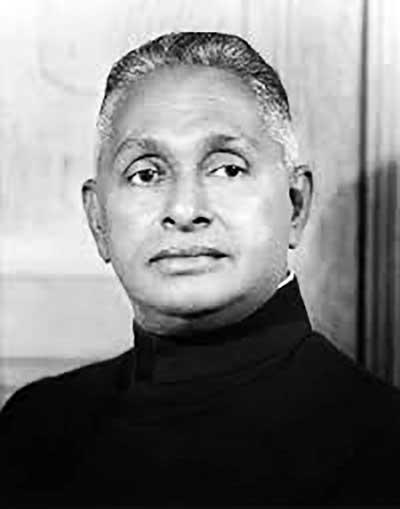 ‘Wickremesinghe Mudali who helped King Rajasinghe to wage war against the Portuguese, on the Kelani banks, shunned the ‘Wickremesinghe’ name in preference to the name of the village, ‘Kotelawala’: 20th C. Impressions -Arnold

The Kotelawalas shot back to the limelight after one and a half centuries, with the appearance of Don Manuel Kotelawala, Undugoda Arachchi, an inhabitant of Bandaragama. He had a grandson named Don Aaron, who settled down in close proximity to where Mudaliyar D C G Attygalle, the Graphite king, arrack renter turned wealthy landowner lived on the banks of ‘Bolgoda Lake’; a tranquil eco-friendly getaway at Madapatha, with his ten children. The eldest, John [snr], joined the Police. Attygalle had three daughters and a son, the eldest being 21 year old Alice.  Unlike the Shakespearean Montagues and Capulets of Verona, the affluent Kotelawalas and Attygalles of Madapatha, were not feuding families. They often visited the village temple. On one such occasion, Alice raised her eyes and met John’s—since then, John the Police Inspector whose courage was legendary had been carrying on a covert love affair with Alice. This eventually led to their marriage, Alice giving birth to John [jnr] Lionel on April 4, 1897, who went on to become the third Prime Minister of Sri Lanka [12/10/53 – 12/04/56].

In 1906, John [snr] was ‘compelled’ to take his own life, as a result of being unjustly implicated by European law enforcement men, in the murder of his brother-in-law [Alice’s brother], Francis. The nine-year old John [jnr], though born with the proverbial ‘silver spoon in the mouth’; along with his two siblings, had to undergo immense hardships during the murder trial and the father’s tragic, untimely death. They were being subject to severe harassment by Alice’s sister’s husband, T G Jayewardene [an uncle of JR]; until finally, Alice’s youngest sister’s husband, FR Senanayake [national hero and brother of D S Senanayake], extended his helping hand.

“Indian PM Jawaharlal Nehru, playing the ‘Big Brother’, questioned Sir John. “Lionel, why didn’t you show your speech to me before?” Only for Sir John to hit back, “why should I Nehru?… Do you show me yours, before you make it?”

John attended Royal College, where he played cricket, tennis and football. In 1915, the three Senanayake brothers, together with other leaders like D B Jayatilaka and the Hewavitarana brothers were jailed by the colonial governor, on trumped up charges of inciting the Sinhalese against the Muslims. At the Welikada Jail they were given stale food in dirty tin plates thrust into the cells under the door. The 18-year old John was chosen to smuggle food into the prison. John, later attended Christ’s College, Cambridge. Their family plumbago business greatly improved due to his mother Alice’s astuteness, affording them a life of luxury once again. John married Effie Bandaranaike, a niece of DS Senanayake, which marriage soon ended in divorce.

John Kotelawala served in the Volunteer Force, joining the Ceylon Infantry in 1922 as Captain, and rose to the rank of Colonel. He won the Kurunegala seat in the State Council in 1931 and was re elected in 1936, representing the Dodangaslanda seat. He was then appointed the Minister of Communications and Works. He was responsible for implementing the Construction of the University of Peradeniya, the Laxapana power project, the expansion of the Ratmalana Airport; and Colombo Harbour.

Kotelawala, the pleasure-seeker was not taken seriously by the people, remained an MP for a couple of years following UNP’s defeat at 1956. The ‘legendary’ socialite spent the English summer in his garden paradise at ‘Brogues Wood’, Kent, in England and the rest of the year in the ‘Garden of Eden’ at Kandawala’s landscaped 48-acre gardens.  After a strenuous game on a fine tennis court, he encouraged his guests to feast on the finest Scotch and exotic dishes. Feeding the deer, black swans, peacocks, elephants, tropical fish and birds, at Ratmalana and the wallabies, geese and the mallards, at Brogues Wood, was his pastime.

“In a historic move in 1979, he donated his residence and 48-acre Kandawala estate to the government, for establishing a National Defence Academy. John Kotelawala was knighted in 1948 and made a Privy Councilor in 1955. The Defence Academy was subsequently raised to University status and is presently the ‘General Sir John Kotelawala Defence University’ [KDU]”

Neville Jayaweera-CCS, former Director General SLBC, reported on his meeting with Sir John at his farm, Kent, in 1974-“ Do you realise Jayaweera, what a bloody snake pit politics is? Don’t be a bloody …. Jayaweera; Self interest! Self interest! Opportunism and self interest! That is the guiding rule of political power, the only principle that all politicians … live. Neither country, nor religion, nor anything else, but simply opportunism and self interest!!  All this talk about principles and ideology in politics is a lot of balderdash men!” … “When DS fell off his horse and died, everyone expected the Governor to ask me to form the new government. But no! Instead, Soulbury asked Dudley who was about number four in the seniority table, whereas I was next in command. That is how gentlemen play politics!”

The Bandaranaike- Chelvanayakam pact -1957 was vehemently opposed by the main opposition UNP, led by Dudley and JR. They held Protests island-wide, ending up with a massive walk- from Colombo to Kandy. When this idea was  conveyed  to  Sir  John,  who  by  the  time was  out  of  active  politics,— Sir  John  advised   them  against  creating  communal  disharmony  among  the  two  major  communities  and  also warned them on  the  other risks  involved in marching  through the opposition strongholds  of  Gampaha  and  Attanagalle  electorates. He told  J R, “I say Dickey, you  think  they will  allow  you  safe  passage  through  their  territory? You had  better  take  a  truck  load  of  stones  to  defend  yourselves, if  you  are going  to  make  it.”

Sir John was proved right on both points. The second was on the third day of the march at    Imbulgoda, where a large  gathering  of  goons, led  by  a  local  SLFP  politico ‘greeted’  the  peaceful  marchers  with  stones  and sticks and by blocking  their  way. The  Police  were  compelled  to  disperse  the  gathering  to  prevent  further  clashes.  The other long term consequences  of  the  abrogation  of  the  pact as  predicted  by  Sir John,  are  now  history!

In a historic move in 1979, he donated his residence and 48-acre Kandawala estate to the government, for establishing a National Defence Academy. John Kotelawala was knighted in 1948 and made a Privy Councilor in 1955. The Defence Academy was subsequently raised to University status and is presently the ‘General Sir John Kotelawala Defence University’ [KDU], a fitting tribute to the fearless, but impulsive man who suffered a stroke on October 1, 1980. President JR visited him at the Hospital and conferred on him the honorary rank of General. He died the next day.