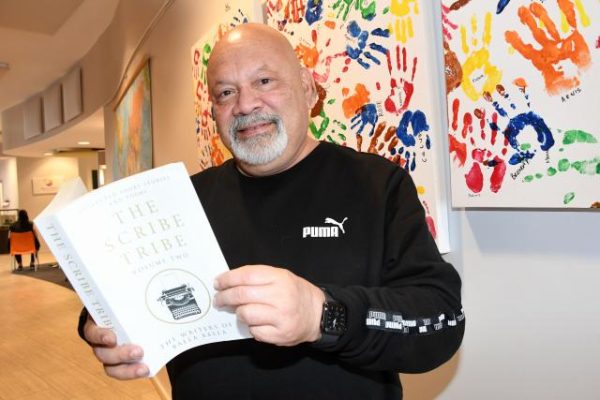 Having worked for the UN in both New York and the Middle East, Rod Grigson now calls Botanic Ridge home, and teaches creative writing at the Balla Balla Community Centre. 279564_01

Precede: Rod Grigson’s ambitions to travel took him to New York, the Middle East, and now Melbourne, where he has settled with his wife in Botanic Ridge. The IT specialist turned published author spoke to Gazette Journalist MARCUS UHE about his experiences and how they have shaped his outlook.

A series of fortunate events has Rod Grigson considering himself extremely fortunate to live the life that he has.

Growing up in a socialist Sri Lanka dodging conflict and economic turmoil unfolding all around him and facing limited future prospects, he was searching for a way out of the country but faced significant financial hurdles.

A chance message from a distant cousin living in New York with a plane ticket for him to fly to the Big Apple gave him a chance to escape, and proved to be a true sliding doors moment.

“She was living in New York and said, ‘Rod, here it is. Come and live with me and we’ll see what happens from there,’” Mr Grigson said.

“She was the one that got me out of the country and my life would have been completely different if I had not got that ticket.

“I was contemplating going over land to Europe because I didn’t have the money to fly. I was going to take a boat to India and go by road and railway across to Europe. That would have been my plan.

“It would have been a completely different story, my life.”

Searching for employment but only holding a tourist visa, Mr Grigson went to the UN headquarters to look for work.

Serendipitously, they happened to be hiring at the time, and he was whisked into an examination room for a 90-question multiple choice exam that he happened to blitz, resulting in a job offer.

Mr Grigson worked diligently during his night shifts but as a curious 25-year-old, his ambitions to travel remained strong.

When the UN put out the call for staff to travel to the Middle East on deployment, he leapt at the opportunity. But he had no idea what he was getting himself into.

As Israel invaded South Lebanon In 1978, Mr Grigson found himself as an inventory officer for the UN’s armed forces, responsible for keeping tabs on all equipment, including vehicles and weaponry used by the 11,000 soldiers.

While he was able to achieve his goal of travelling, meeting new people and seeing more of the world, he didn’t expect his life to be in danger before he accepted the opportunity.

“All these things happen but you’ve just got to learn to live in that environment.

“It was a bit of a shock to the system but you adapt. Humans are amazing creatures and you adapt to all sorts of strange things.”

Come 2022, Mr Grigson has retired from his days as a computer technician and now teaches at five different community centres across the South East, including Doveton Neighbourhood Learning Centre and Balla Balla Community Centre.

Through his Grandfather’s encouragement to read as much as he could, he developed a love for books as a boy, fostering aspirations early in life to explore creating his own literature. But for a man who had spent his working life completing non-fiction reports requiring precise, technical language offering few avenues for exploration or creative flair, it was a big shift.

After receiving some uncomfortable feedback from an editor on his first attempts at creative writing, the future teacher enrolled himself in a creative writing course in 2013.

He was told that he had the content and experiences to write engaging and compelling stories, inspired by his real-life accounts of his time in conflict zones, but not the skill to execute the task.

The next year, after months and months and practice and refinement, he was a published author, as his first book, ‘Sacred Tears’, a story about characters experiencing global conflicts in the Middle East and Sri Lanka, hit the shelves in 2014.

Mr Grigson took over ‘Scribe Tribe’ following the departure of their previous coordinator and in a desperate state, with just a handful of members to speak of.

After creating his own creative writing course for his class, he revived the group to 18 current members, with memoirs published in 2019 and 2021, respectively.

Their latest documents their experiences living through Covid-19 and everything that came with the challenges of lockdowns and dodging a dangerous disease.

“As a teacher, it’s very satisfying,” Mr Grigson said of producing a final copy and having something to show for the group’s hard work.

His home country of Sri Lanka continues to be ravaged by economic uncertainty in 2022, with shortages in essential resources such as food and fuel crippling the island nation, including his younger brother, who is still at home and recently lost his tourism business.

He supports his brother from afar financially where he can, under no illusions that he could have faced the same fate, if not for receiving that fateful ticket out of there as a young adult.

It all underpins his tremendous sense of gratitude that he carries with him every day.

To read some of Rod’s work, including his short stories and published novels, go to rodericgrigson.com