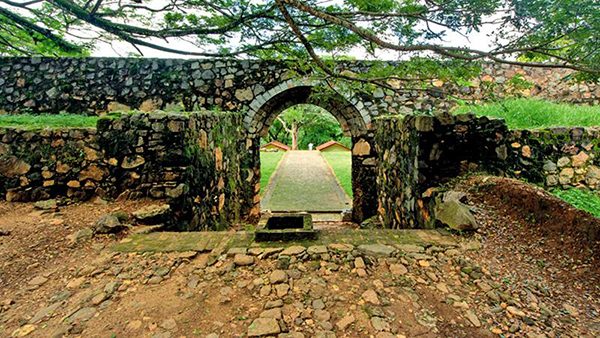 The interior of the Fort 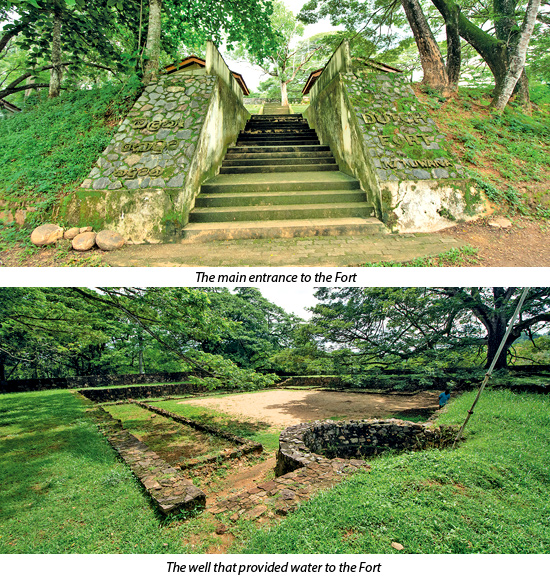 Sri Lanka still has a number of forts which were garrisoned by the Portuguese, Dutch and the British successively. However, there is a curious structure in the centre of the sleepy town, Katuwana. Yet it is a Fort.

We had an opportunity to visit the Katuwana Fort recently on our way to Mulkirigala. Travelling from Ratnapura, we passed an awe-inspiring mist laden mountainous region of Rakwana and Bulutota Pass.

We crossed Panamura and reached Middeniya. We turned right and proceeded another 12 kilometres to reach Katuwana. There is an alternative road – travel 140 kilometres from Tangalle on the Walasmulla – Kirama road which leads to Katuwana. This is where one can find an enchanting, lesser known, small but imposing Dutch Fort on a small hillock.

Travelling in the area, my memory goes back to 1988 and 1989 when the area was soaked by the blood of youth killed in the insurrection.

I remember the picture of the funeral procession of a youth in Walasmulla that appeared in the TIME magazine, which was taken by the American photographer Robert Nickelsberg.

Situated in the Southern Province, Katuwana is around 12 kilometres from Middeniya where the low country ends and the mountainous region of the central highlands begins. It is safe to assume that the Katuwana Fort was constructed at a defensive position to protect the Northern territory controlled by the Dutch VOC Company, anticipating possible attacks from the Kandyan Kingdom. Today, it is hard to miss as you pass through the Katuwana town as the Fort rises above all.

The Fort is small, compared to those in Galle and Matara and has only two bastions. It is said that there were 12 cannons positioned strategically. The Dutch East India Company built the Katuwana Fort on a rising ground around 40 kilometres inland from Matara in 1645.

As we begin to climb the steps towards the main entrance of the Fort, it takes a while in imagining what the area may have looked like during the Dutch period as the Fort is surrounded by a modern town. What remains of the Fort is its massive rampart, bastions and the foundation base of buildings that gives an inkling of what it could have been. 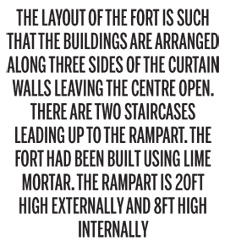 The layout of the Fort is such that the buildings are arranged along three sides of the curtain walls leaving the centre open. There are two staircases leading up to the rampart. The Fort had been built using lime mortar. The rampart is 20ft high externally and 8ft high internally. The central square has been elevated in two parts as a defence mechanism. The Fort had a surgery room and medical facilities as well.

Matara, the second important town in the South of the VOC and Dutch time, controlled the lucrative local cinnamon production and the Southern elephant trade. The Muslim community was engaged in gem cutting and gem trade. Therefore, the Katuwana Fort was also the commanding base for the smaller inland forts at Akuressa and Hakmana which no longer exist.

In 1761, during the Matara Rebellion, the Katuwana Fort was captured by the Kandyan forces. The main gate, including the rampart walls were damaged during the siege. The main doorway of the Fort can now be found in the main entrance to the Maduwanwela Walawwa around 30 kilometres from Katuwana.

After the Matara Rebellion and subjugation of the Kandyan Kingdom by The British in 1815, the Katuwana Fort lost its strategic significance and was abandoned for over 250 years. The Katuwana Fort was named as an archaeological reserve in 1980 by the Department of Archaeology. However, the conservation of the Fort began in 2007. The Katuwana Fort has now been restored to its ancient glory with the assistance of the Netherlands Government.

The extensive archaeological excavations carried out in the site in 2007, has unearthed the remains of a sump constructed across the entrance to protect the Fort from soil erosion. During the excavation, these remnants were removed and re-erected at a separate location for public view.

Walking in the Fort, we came across the remains of ancient tiles and bricks scattered around the Fort. We spent around an hour walking around the rampart wall of the Fort and witnessed massive trees within and around the Fort. Some of the tree roots have penetrated the rampart wall. It doesn’t take long to walk around the little Fort, but you can stay there for hours as it is quiet and peaceful among the surrounding greenery with plenty of shade.