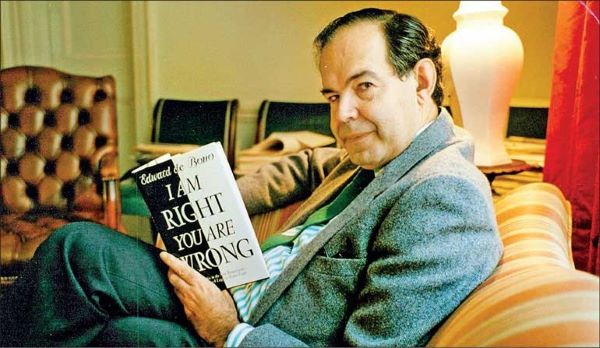 It was sad to note the demise of Dr. Edward de Bono on 9 June 2021. He is hailed as the ‘Father of creativity’ in the western world. His contribution towards making the planet a better place to live through his ‘lateral thinking’ is indeedamazing. Today’s column is to discover the dynamics of Dr. de Bono in the broad context of creativity, with a view of reflecting on them in relation to the local scene.

“You can analyse the past, but you need to design the future,” so said Edward de Bono. We have passed the era of information and reached the era of imagination. Creativity has become a cutting-edge factor for competitive advantage. Creative thinking is a mental activity, which produces new ideas or new insights. It does this by de-patterning or re-patterning thoughts.

In fact, our mind is the sum-total of our memories, images, desires, expectations, beliefs, feelings, and other such mental processes. Thinking is therefore a sequence of images and events, which constitutes our mind. Here comes our hero. Dr. Edward de Bono, who shared several simple yet significant techniques to sharpen our thinking towards finding solutions to pressing problems.

Glimpses of an illustrious career

Edward de Bono played multiple roles as a physician, psychologist, author, inventor, philosopher, and a consultant. He was born in was born in Malta in 1933, gained a medical degree from the University of Malta. Following this, he proceeded as a Rhodes Scholar to Christ Church, Oxford, where he obtained MA in psychology and physiology. He then gained a doctorate from Trinity College, Cambridge, and many other honorary doctorates subsequently.

Dr. de Bono worked with many of the major corporations in the world such as IBM, Du Pont, Prudential, AT&T, British Airways, British Coal, NTT (Japan), Ericsson (Sweden), Total (France), etc. “We all hang on to assumptions of the past to make conclusions about the future……de Bono teaches us to challenge such assumptions and develop new creative solutions to problems.” So said Philip L Smith, President, General Foods Corporation.

Dr. De Bono wrote over 60 books including The Mechanism of Mind (1969), Six Thinking Hats (1985), How to Have a Beautiful Mind (2004) and Think! Before It’s Too Late (2009). He wrote in his book The Mechanism of Mind, “A memory is what is left when something happens and does not completely unhappen.” As the Guardian newspaper reported, his books, seminars, training courses and television series, sought to free people from the tyranny of logic through creative thinking.

“What happened was, 2,400 years ago, the Greek Gang of Three, by whom I mean Aristotle, Plato and Socrates, started to think based on analysis, judgment and knowledge,” he said. “At the same time, church people, who ran the schools and universities, wanted logic to prove the heretics wrong. As a result, design and perceptual thinking was never developed.”

What should she do to avoid a nightmarish fate?

This is where lateral thinking – i.e., employing unorthodox means to solve a problem – comes in. De Bono suggested the daughter should pick either bag, but fumble and drop her stone on to the path. “Since the remaining pebble is of course black, it must be assumed she picked the white pebble, since the money lender dare not admit his dishonesty.”

De Bono believed humour was one of the most significant characteristics of the human mind, precisely for its basis in shifting perceptions. “Let me tell you a joke,” he said. “An old man dies and goes to hell. When he gets there, he sees his friend, a 90-year-old man, with a beautiful woman sitting on his knee. He says to his friend, ‘This can’t be hell, you’re not being punished, you’re having fun!’, to which his friend replies, ‘This is punishment – for her!’”

“Every organisation has to prepare for the abandonment of everything it does,” so said Peter Drucker. Innovation is followed by imitation. Only way to sustain the competitiveness is to continue to innovate further. Creativity is the starting point. Dr de Bono, elaborates further on creativity: “As competition intensifies, so does the need for creative thinking. It is no longer enough to do the same thing better. It is no longer enough to be efficient and solve problems. Far more is needed. Business needs creativity both on the strategic level and on the front line to make the shift of those competitive business demands – from administration to true entrepreneurship.”

The practical application of the above comes from the technique known as ‘six thinking hats’, suggested by Dr. de Bono in 1985. It is essentially six different perspectives towards an issue or a problem. This novel method found its admirers worldwide. Motorola, IBM, and Boeing as example, reported cutting meeting times by half by applying it. Ron Barbaro, CEO of Prudential Insurance, one of the ardent users of the above said that after suggesting an idea that executives might counter was too risky, “he would say: ‘Yes, that’s fine black hat thinking. Now let’s try the yellow hat.’” “The six thinking hats method may well be the most important change in human thinking for the past 2,300 years,” de Bono wrote in the preface to the book.

With logic you start out with certain ingredients just as in playing chess you start out with given pieces. But what are those pieces? In most real-life situations, the pieces are not given, we just assume they are there. We assume certain perceptions, certain concepts, and certain boundaries. Lateral thinking is concerned not with playing with the existing pieces but with seeking to change those very pieces. Lateral thinking is concerned with the perception part of thinking. This is where we organise the external world into the pieces we can then ‘process’.

Creativity involves breaking patterns and thinking out of the box. For that to happen, we should know what the ‘box’ is. In other words, one should know the constraints that hinder creativity in moving beyond them. In fact, creative thinking is a mental activity, which produces new ideas or new insights. Innovation is the practical application of it that adds value to an organisation.

Warren Bennis, the leadership legend, described creativity as a dimension of a ‘new paradigm’ for managers. He cites the following elements as parts of creativity:

In other words, creativity implies a capacity for vision, intuition, perception, connection, and application.

In a Harvard Business Review (HBR) article, Tom Kelley, and David Kelley question whether the management world is really divided into ‘creatives’ and ‘noncreatives’? Maybe not, but many people still deem themselves unimaginative. The authors, both leaders at the design and innovation consulting firm IDEO, have discovered that ‘teaching’ creativity is really a matter of helping people find the courage to tap into the ‘creative confidence’ they already possess.

The lesson for us is simple. It is to assess where we stand and move forward accordingly. Peter Drucker advises the managers to be creative and innovative in one of his classic HBR contributions, way back in 1985. “Innovation is the responsibility of every executive, and it begins with a conscious search for opportunities.”

We are passing through an era where the new problems emerging need new approaches with new insights. As reported by the Guardian newspaper, Dr. de Bono’s most trenchant thinking concerned children’s education. “Schools waste two-thirds of the talent in society. The universities sterilise the rest,” he said. Dr. de Bono was particularly scathing of Britain, where, he claimed, rigid thinking and an obsession with testing led to many children leaving school “believing they are stupid”. “They are not stupid at all; many are good thinkers who have never had the chance to show it. But that lack of confidence will pervade the rest of their lives.”

What he observed in the UK might be relevant to many societies including us. I recall Prof. Howard Gardner who advocated the promotion of ‘multiple intelligences’ as opposed to just ‘reading, writing and mathematics’ who had the same view of schools suppressing creativity of children. An education system for the future should foster creativity in opening minds for fresh thinking.

We have seen the challenge of fresh problems demanding fresh thinking with a break away from conventional solutions. Combating of COVID-19 with its expanding variants has intensified the need to have more lateral thinking. The techniques advocated by Dr. Edward de Bono are in fact useful and relevant in the past, present and future as well. Though Dr. Edward Charles Francis Publius de Bono left us at the age of 88, his contributions to humanity will be long remembered with increasingly vibrant use of his techniques.

(The writer, former Director of Postgraduate Institute of Management, can be reached through ajantha@pim.sjp.ac.lk, ajantha@ou.edu or www.ajanthadharmasiri.info.)