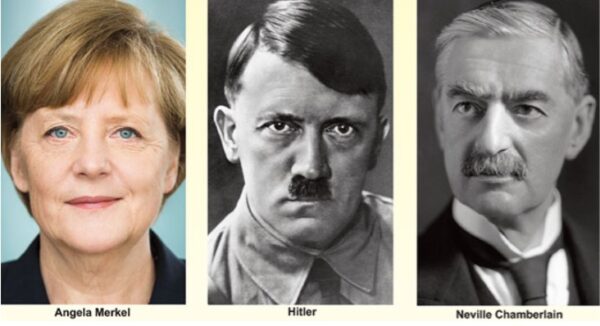 My basic belief is that experiences of past and contemporary events and personages will determine our current behaviour. Such experiences would have been from the local scene and from world events. Of world events what affected me most was World War II in 1942 when the Japanese bombed Colombo and Trincomalee.

Of world events, I deal mainly with Germany which played a key role in world events during World War one (1914-1918) and two, (1939 to 1945). In the European wars; the Germans left death and destruction as they advanced through Belgium towards France. In contemporary times, I must refer to Angela Merkel the Chancellor of Germany for 16 years. A brief account of her rule was given in the Sunday Times of July 18 this year. Her rule was illustrious in ways that we could learn a lesson from, her in governance and fair-play and the greater importance of the individual rather than the community.

A few extracts from that report are worth quoting. When she retired from party leadership and politics, the people applauded her for her 16 years of dedicated service. She did not assign any of her relatives to a government post, she did not own a villa, servants, swimming pools or gardens as that report ended with that comment. Here is a lesson for all leaders irrespective of which country they lead. Every Sri Lankan would crave for such a leader.

It is informative to go back to European history. Michel de Nostradamus published ten books, all titled Centuries, each with a hundred quatrains. This French physician and seer prophesied in his Prophecies in 1555 that one of three anti-Christs (devils) to plague the world will be Adolph Hitler. John Hogue (1987) in his book Nostradamus and the Millenium; Predictions of the future wrote: “Nostradamus saw Hitler as the second anti-Christ and possibly the greatest demagogue in our history. The prophet’s belief was that each of the three anti-Christs named would, in escalating degree, bring humanity closer to the final holocaust. “

Neville Chamberlain the British Prime Minister met Hitler in Munich in 1938 and made an agreement; he announced on his return to Britain “Peace in our time…”. Chamberlain had not learnt from history and World War II broke out in 1939.

– With morbid fascination, I re-read, A pictorial history of Nazi Germany by Erwin Leiser. I had written two essays in my book “I think, therefore I am- Rene Descartes” 1. The illusion of a national character, 2. The view from above. In 1, I considered modern German history. Contrasting with the monsters that were Hitler and his henchmen, there were also illustrious German persons, like Goethe, Schiller, the Buddhist scholar monk Nyanatiloka, and Max Muller; where do these latter blessed people fit into Hitler’s Nazi Germany?

That paradox was solved by my consideration of the Frequency Distribution (Gaussian) curve of a plot of the frequency of incidence of the components of the spectrum of human nature, from peaceable, wise people at one end to the murderers and monsters like Hitler at the other end; every population has that spread.

My second essay 2 was “The view from above” in which I wrote of my view from a 19th floor apartment, gazing on the street below, watching the ant-like humans; a man looked so small and insignificant while his brain was far smaller. Yet it was a brain of that size that spewed out the horrors of Nazi Germany, that led to the destruction of Western Europe and the murder of six million Jews. My readings urged me to re-consider, in all futility, the depressing topics of – The Nature of Man and The Future of Man. One might also read my essay, The origins of belief, published in The Island.

– The Pictorial History of Nazi Germany had a final comment: “It is the responsibility of each one of us, be the politician or mere voter, to ensure that there is no new Hitler, no new age of horror”: I think that is a vain hope for it seems to be the case as Georg Wilhelm Friedrich Hegel, the German philosopher wrote : “We learn from history that we do not learn from history”. Moreover, when studying in Europe, I had the chance to spend a short holiday and I chose Germany, which to me was the most paradoxical, inscrutable country of all.

An incident gave me the clue to one aspect of the German psyche – total, unquestioning, obedience to authority. I was standing on the road at a pedestrian crossing. There were several (Germans) also standing, waiting for the red pedestrian light to turn green. There were no cars or other traffic on that road at that time, yet not a single German crossed the road, until the light turned green. That is German discipline for traffic rules- and for Hitler. On the topic of discipline, this comment emphasizes the thrust of an essay that I wrote in The Island, on the role of the individual versus that of the Institution, and that view of the predominance of the indiividual’s importance I begin my last comment.

Discipline of a population must begin with the youth who are the forerunners of adults and a university is the main source of individuals a few of who will become the rulers. Having been an academic in the Peradeniya University in the 1970s, I was aghast at the indiscipline of students who even rented a house next to the campus to do their sordid ragging. The administration seemed incompetent to handle it. The ragging was so severe one female rag victim even committed suicide in a Hall of Residence.

In the 1960s, I was in the University of Manchester, UK, where there was a Rag-Rag week during which new entrant students were subjected to mild, good humoured rags. They however did not verge on the brutal acts in the Peradeniya University. However I was reassured when The Island newspaper of July 19 this year, published an article titled “Public Security Minister reiterates need to instill discipline among youth….. the Minister said that the youth had no respect for discipline, obedience to rules, and values of upholding good behavior”.

Heaven help us if these miscreants become our rulers. Let us hope that this university recovers its former reputation which merited the comment on the Web; “A centre of excellence in higher education with national, regional and global standing“. In conclusion I must refer to a comment on the Web on Peradeniya University perhaps of bygone years; it was referred to as one of the best universities in Asia.

(The writer is emeritus professor of microbiology, University of Peradeniya)