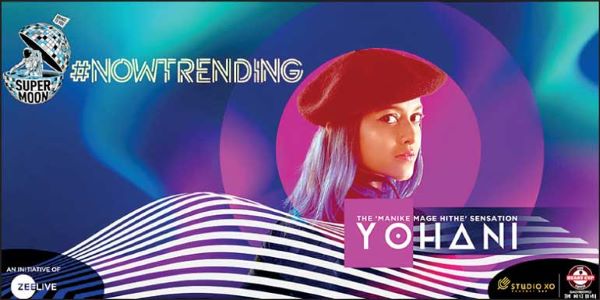 Sri Lanka’s singing sensation Yohani Diloka De Silva, who rose to global fame with her cover version of ‘Menike Mage Hithe,’ is billed to make her first performance in India by popular demand.

“Yohani, the biggest music trend, is coming to India. All the way from Colombo, the ‘Manike Mage Hithe’ trendsetter is all set to rock,” said the organisers.

The 28-year-old singer will be performing with her nine-member band with the opening act by Indian female DJ Barkha Kaul.

A post on the booking site said: “Supermoon #NowTrending uncovers the most incredible emerging artists who took the internet by a storm to perform live in India; and this time it›s none other than the artist from Sri Lanka, Yohani, who won hearts all over the world.”

Supermoon is an Intellectual Property of Zee Live, a division of Zee Entertainment Enterprises Ltd., (ZEEL), which has been curated with the objective of bringing the leading international entertainment acts from comedy, music, theatre, etc. to India.

The ‘Manike Mage Hithe’ cover by Yohani and Satheeshan has been on the YouTube Global Top 10 songs for six weeks and is placed at number seven this week, one notch down from six the previous week. The song has triggered over 116 million views on YouTube so far whilst adopted versions of Hindi, Tamil, Malayalam, Bangla, etc. by several popular artists have drawn more million views.

Such has been her ever-growing fandom that everyone from influencers to celebrities such as Amitabh Bachchan, Tiger Shroff, Madhuri Dixit, Parineeti Chopra, Krystle D’Souza, Rannvijay Singha, Neha Kakkar, Yashraj Mukhate and many more have grooved to the song on their social media profiles. It has even got the K-Pop sensation BTS to come out with a “reaction video” to it.

Commenting on being a part of Supermoon #NowTrending and performing in India, Yohani said: “When we recorded this song, we never did it with any plan in mind. It was a project born out of our combined love for music. I am humbled to see the love it has received from India, and I couldn’t be more excited to be a part of something as incredible as Supermoon #NowTrending. I am thrilled and look forward to performing live amongst my fans and connecting with them in-person.”

Zee Live Chief Business Officer Swaroop Banerjee said: “Right from its inception, Supermoon has always engaged with our audiences and connected them with their favorite artists across genres from comedy to music.

“Through our newly-launched sub – IP Supermoon #NowTrending, we will continue to engage and connect with our audiences through exciting performances, as we extend a platform to bring the most trending and popular artists in the music and comic genres. We are excited to kick-start it with Yohani, who has already become a force to reckon with in the music industry.”