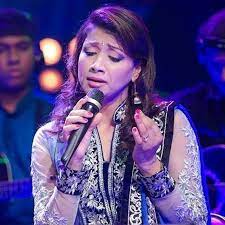 The complex psychological process which is very much a conscious process is also automatic when it comes to naturally talented singers such as Lakmini Geethanjali Udawatta.

Lakmini was one of the final twelve contestants in Sirasa Super Star contest season 3. She had sung in a number of Chat ‘N’ Music and ‘Sanhinda’ programmes of the Independent Television Network. She has also recorded her own musical videos and songs which could be accessed via the You Tube.

After her graduation Lakmaini had been a visiting Hindustani music lecturer at Horana Sri Pali Campus. Lakmini had been compelled to leave our shores to Dubai after she got married to her teenage lover Ranga Herath who is a aeronautical engineer attached to emirates airlines in Dubai United Arabic Emirates. Ranga is qualified in Aerospace engineering science at the Kingston University in London.

At the very tender age of just five, Lakmini  had confirmed precisely an excellent wisdom of timing and vocal potential. She could scarcely articulate the words appropriately, but her uncle had detected the innate aptitude of  Lakmini’s expertise for singing. That same year, she performed on Television for SLRC a programme titled ‘Tikiri Lama Gee’ . The multi faceted child artist was discovered instantly and exposed by the Sri Lanka Rupavahini Corporation and Sri Lanka Broadcasting Corporation. She had admirably performed concurrently ‘announcing’ and ‘dubbing’ apart from her singing career.

Lakmini was typically acclaimed and cherished for possessing sturdy vocals which were absolutely mesmerizing. It cascades and get etched on listeners’ hearts hastily. The tones, the rhythm, the muscle, lift up listener’s souls to the climax with extravagance.  Some years later, it became obvious to the family how acutely she hunted to conquer and triumph the stage.

Lakmini’s teachers were Ananda Weerasiri, Thanuja Priyanthi Bandula, Mano Malawala Arachchi and B. Victor Perera. The  former was her fist teacher in music while the others guided and enhanced  her innate vocal potential to the subsequent phase. When she was just 12 years old, she contested  in  an ‘All Island Singing Competition’ , which she performed admirably to be crowned the winner.  Lakmini had won this crown for 09 consecutive years  up to  the year 1999.

Despite her singing talents Lakmini was also a very meticulous student at the Sirimavo Bandaranaike Balika Vidyalaya in Colombo. A superior education was one of the elusive plans that the parents sought to impart to her. After high school, education Lakmini persevered her musical studies at the University of Delhi obtaining a Bachelor of Arts (Hon) in Hindustani Music in year 2004. She continued her Masters in Hindustani Music and graduated in year 2006.

Lakmini’s husband Ranga had assisted her immeasurably to instigate a music academy for performing arts in Dubai UAE –Sagayuri Madiya Academy for all Sri Lankan expatriates in Dubai mostly for children; who desire to
learn music.

It  is pertinent to mention that because of this voluntary work she is a household name in Dubai as Sinhala music is concerned. For festivals like Sinhala New Year, Vesak , Christmas, World’s children’s’  Day  etc Lakmini invariably organises musical recitals for audiences of Dubai expatriates  merely for her delight for music.

Another significant milestone in her music career was when she was invited to sing at the SLRC programme ‘Sihinayaki Re’ . The guest artiste who had to select 10 songs was renowned actress Chandani Seneviratne.  Both the presenter Mahesh Nissanka and the guest artiste were overwhelmed by her immaculate singing.Her daughter at her tender age also like Lakmini has inherited her talents and already has conquered the stage.