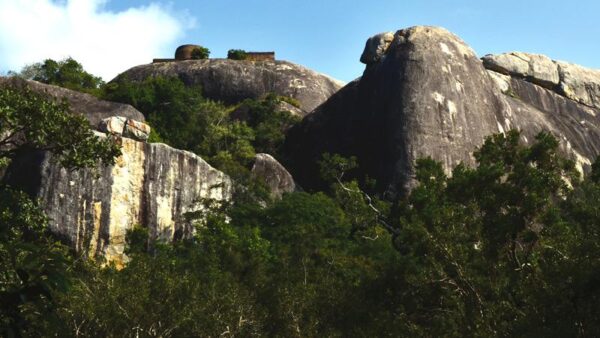 We spotted the isolated Kudumbigala rock in the distance, before we entered the gravel road which led to the Kumana National Park. Kudumbigala lies majestically on top of a rocky outcrop in the Yala East National Park better known as Kumana, 11 kilometres away from Panama. 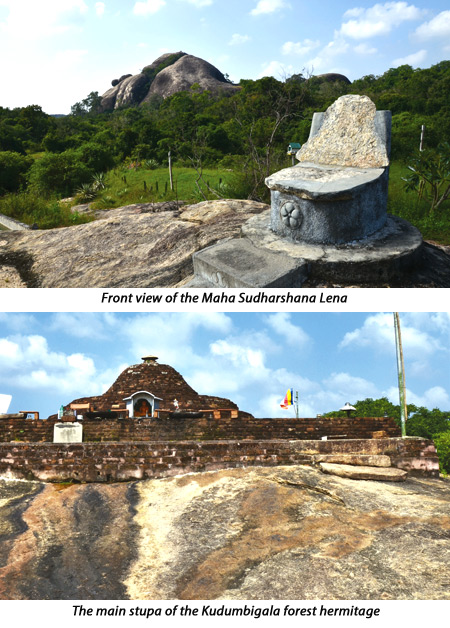 Today, it is known as Kumana-Kudumbigala Sanctuary. There is a shrub jungle covering thousands of acres. No proper road runs through it. Kudumbigala is a sacred Buddhist hermitage frequented by elephants, leopards and bears, but none of these fearsome animals trouble the monastic bhikkhus who meditate in the natural rock caves in the forest. When you climb the top of the rock, you can see a wonderful scenery such as the Kumana National Park, the Bagura lagoon and the east coast that is a sight to behold.

Perhaps, this may be one reason why monastic bhikkhus of a bygone era, have chosen this quiet place to reflect on the eternal verities. This sylvan Buddhist hermitage comprises over 200 natural drip-ledged caves, which are used by meditating bhikkhus as their abodes in the jungle.

I made my first visit to this ancient hermitage in 2002, just after the Peace Accord (MoU) was signed between the then Government and the Liberation Tigers of Tamil Eelam (LTTE) which paved the way for people to visit LTTE controlled areas during the ceasefire period. The purpose of my three-day journey was to photograph as many archaeological sites as possible in the Ampara district. The numerous ancient Buddhist shrines in the Kumana jungle in the Eastern Province had been abandoned due to terrorism.

When the peace accord was signed by then Government and the LTTE, Tamil pilgrims from the North visited the famous Okanda Hindu Devale at the entrance to the Kumana wildlife sanctuary. Many changes have taken place in and around the Kudumbigala hermitage, as spotted by me during my second visit to the hermitage.

The inscriptions in Brahmi script and other ruined structures in the recently discovered cave in the hermitage, Maha Sudharshana Lena, show that Kudumbigala was established as a forest hermitage in the pre-Christian era. A stone inscription at the hermitage has it that the Maha Sudharshana Lena was built and presented to the monastic bhikkhus by Nandimitra Yodaya, one of King Dutugemunu’s Dasa Maha Yodhayas.

Kudumbigala was first established as a refuge for meditative bhikkhus during the time of King Devanampiyatissa. In recent times, it was re-discovered in 1954 by Ven. Thambugala Anandasiri Thera and an Upasaka named Maithree, who made Kudumbigala his home and initiated its rehabilitation. When they came to Kudumbigala, it had been a dangerous place for people, as it was frequented by wild animals. However, they have never harassed either Anandasiri Thera or Maithree Upasaka.

In 1994, darkness enveloped Kudumbigala. The LTTE terrorists had hacked to death 17 civilians in Panama. Kudumbigala was abandoned. Some of the meditative bhikkhus moved to nearby Tharulengala hermitage, a branch of Kudumbigala that lies in Hulan Nuge. The only visitor to Kudumbigala was Ven. Sivuralumulle Dhammasiri Thera, as chief prelate, who made it a point to go there every now and again.

Today, there is no human habitation around this hermitage. Kudumbigala stands towering in silent splendour. When we visited the place in 2002, we couldn’t even find the way to the chief bhikkhu’s adobe. After a laborious process, we reached the top of the rock and met the chief bhikkhu, Ven. Sivralumulle Dhammasiri Thera, in his cave, which was scattered with skulls and bones of wild animals. The Thera’s seat was made of a skull of an elephant.

During its desertion, Kudumbigala was once a haven for treasure hunters. All the stupas had been destroyed in search of treasures. Even today, ‘peace’ has not been able to safeguard Kudumbigala and its environ. Treasure hunters keep looking for abandoned temples, wild animals are being hunted by poachers, and smugglers are destroying precious jungles for timber.

After the peace Accord was violated, the terrorists again infiltrated the East. Ven. Dhammasiri Thera was kidnapped by LTTE terrorists while meditating in his cave in Kudumbigala in 2008. He was in the custody of the terrorists for three days in the wild-animal infested jungle with cut injuries. It is said that the terrorists ran away after being attacked by a sloth bear. 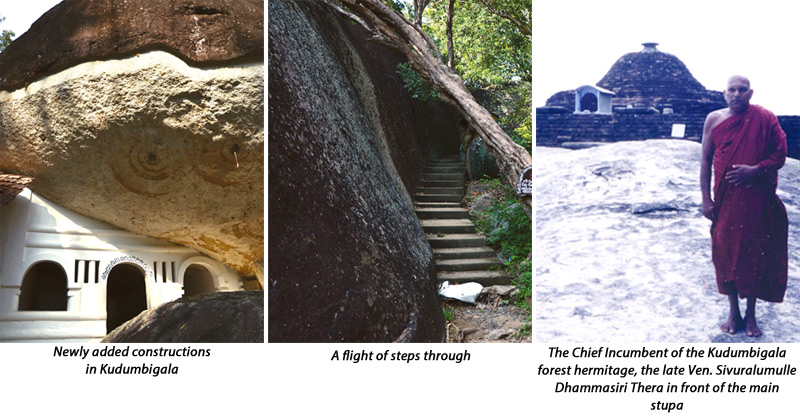 When the injured bhikkhu returned to the road with bleeding wounds, a group of soldiers of the Special Task Force (STF) had spotted him and offered him water. While drinking water, the bhikkhu suffered a coma and was taken to hospital. After recovering, he spent a couple of years and passed away at the age of 65, leaving an indelible impression in the Kudumbigala hermitage.

The present hermitage has new constructions of several buildings and a Buddha statue sculptured out of cement on a rock. The new additions have destroyed the ancient grandeur of the hermitage.

Today, the Kudumbigala forest hermitage is a popular Buddhist hermitage in the East. A large number of devotees from distance places come to offer Dana to meditative bhikkhus who dwell in the natural caves.

Owning to the Covid-19 pandemic, the authorities of the hermitage are struggling to find food and other necessities to the meditating bhikkhus since it is difficult for devotees to travel to distant places.