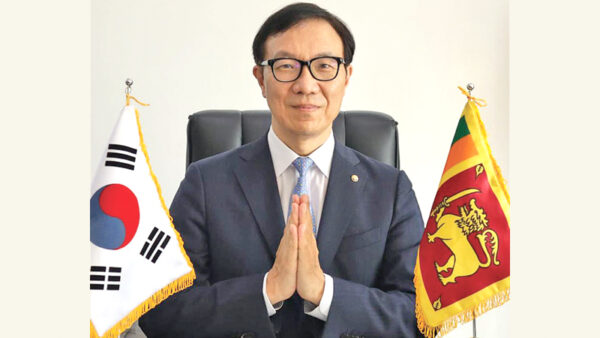 Ambassador Santhush said that following the recent constructive call on Finance Minister Basil Rajapaksa, he observed that the “Divineguma Project” and “Saemaul Undong Movement,” Korea’s New Village Initiative, share many common traits. It is commendable that Sri Lanka and Korea have been emulating this economic model to improve the living conditions of rural communities. Korea has a unique story of economic development, the so called “Miracle on Han River”.

He said that Sri Lanka can develop in to the “Miracle of Kelani River” with the assistance and cooperation of Korea. Given Korea’s understanding of ground realities in Sri Lanka, the Korean government considers Sri Lanka as a priority development partner to extend assistance in economic and social infrastructure and rural economic regeneration.

The Ambassador said that the Republic of Korea is committed to assist developing nations including Sri Lanka to build more sustainable rural economies.

State Minister Semasinghe expressed his appreciation to the Korean government for sharing technical expertise and extending support to uplift the rural economy in Sri Lanka via the Saemaul Movement.

The Onion Harvesting Project initiated under the Saemaul Undong Movement in Sri Lanka has yielded successful results, leading to the growth of the rural economy in the North-Western Province. In

addition, the Saemaul Undong had assisted the villagers of Pitiyagama and Pahalagama in the Sabaragamuwa Province and Kegalle on Mushroom and Onion Projects. These initiatives have been successful

as the products are available for the public from major super markets in Sri Lanka.

The Saemaul Undong is a pan-national modernization campaign by the Korean Government in the past. It improved the living conditions of people in the Korea’s rural areas. The Movement contributed to improved community wellbeing in rural communities through agricultural production, household income and communal empowerment.

The economic success of Korea can be attributed to adopting this economic model in 33,000 villages. These villages were supported with infrastructure, low interest loans, entrepreneurial know-how and finances, which led to the economic advancement of rural communities.