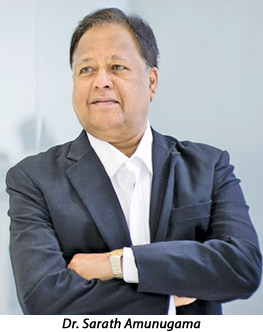 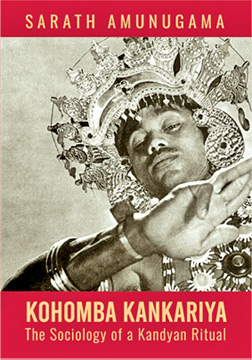 Dr. Sarath Amunugama’s latest publication titled Kohomba Kankariya – the sociology of a Kandyan ritual, is a welcome addition to the limited number of research publications available to the local reader on this religious ritual which has been quite familiar to generations of people of the Kandyan region.

The author who had earlier published a brief essay (Kohomba Kankariya haa Sinhala Santhikarma ratawa) in April 1968 on the subject in a Sinhala periodical devoted to arts, at the time when he was a busy bureaucrat; has now in retirement authored this new publication with interesting details and interpretations regarding this fascinating ritual.

Kohomba Kankariya which is the most elaborate of the Kandyan rituals, according to legend, had been performed to cure King Panduwas who had been afflicted with a mysterious ailment.

God-King Sakra to whom Buddha is supposed to have entrusted the guardianship of Lanka, when informed by Gods regarding Panduwas’s condition, had decided to intervene and sent Mala Raja to Sri Lanka to cure him of the ailment.

In the course of time, Kohomba Kankariya had developed to be a healing ritual made use of to cure not only human beings afflicted with mysterious illnesses but even to protect the villagers’ livestock in times of epidemic.

In the olden days it had been held over a number of days, the minimum being around three days.

The Kankariya was later scaled down to affordable financial limits as staging the complete ritual is a costly exercise. However when natural calamities bring misery to an area causing general dislocation of village life, all the inhabitants of the village come together; and make their individual contributions in cash, kind or labour to organise the Kankariya. 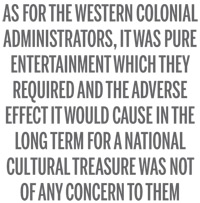 Dr. Amunugama’s monograph which deals with Kohomba Kankariya which is generally accepted as the most widely-known healing ritual in the country has been arranged in the form of three essays.

The first one deals with the Kohomba Kankariya for which almost half the book has been devoted and the balance half deals with Ves Natum and the master- performers who had with their spectacular performances made a lasting impression both locally and abroad and brought honour and glory to the country. The essay on Kohomba Kankariya has been titled by the author as “a dance drama of revenge, retribution and relief”.

It is presumed that the figures involved in the above acts are the ones figuring in the series of episodes from the arrival of Vijaya to the healing of Panduwasdev.

According to the centuries-old myth, Prince Vijaya after landing in the island, having co-habited with Kuveni the Yaksha-Princess for a number of years and after fathering two children; had broken the marriage- pledge given to her and proceeded to import a princess from Madurai.

He had banished Kuveni and the two children to the jungles; and inevitably incurred the wrath of Kuveni who had even slaughtered the members of her tribe to please Vijaya.

Vijaya realising that he must groom a successor, had sent a message to get down his nephew Panduwasdev.

The ill-effects of Kuveni’s curse had continued to haunt Panduwasdev who succeeded Vijaya and was afflicted with a mysterious illness.

According to the myth, God-King Sakra intervened and instructed King Mala Raja to proceed and avert the evil consequences which were due to fall on Panduwasdev and to ensure his recovery.

Mala Raja had then arrived and performed a healing ritual and restored Panduwas to health.

According to Amunugama, Kankariya is presented as a replica of that archetypal healing ritual of the Mala Raja.

The number of episodes and recitals which form an important feature of the present-day Kankariya such as Mahaa Yaathikaawa, Asna, Deviyange Kavi, Malyahan Kavi, Kolmura Kavi and Kathaa Paha and their content reflects the local touch evident in them and indicating that they have been later incorporated.

According to the Mahavamsa, Kuveni having been banished by Vijaya was proceeding to an area called Lankapura with the two children when she had been slain on suspicion that she was a spy. The two children who had then been advised by a Yakkha to flee to safety, had ended up in what was then called Malaya Rata of Lanka.

Geiger in his edition of the Mahavamsa refers to this Malaya Rata as the central mountain region in the interior of the country.

Although the Kohomba Kankariya may have after the recovery of Panduwasdev been often held to heal people afflicted with mysterious illnesses caused by supernatural beings, it has essentially been a fertility cult generally performed soon after harvesting the paddy crop.

It has been a thanksgiving ritual performed after recovering a good harvest without crop loss or damage, unexpected calamities such as floods or long periods of drought.

According to the supernatural beliefs the people were accustomed to, good harvests had been determined by divine intervention, and therefore deities had to be profusely thanked.

At the same time an appeal also had to be made to seek blessings for the next crop from the guardian deities in whom they believed.

Dr. Amunugama who has been born and bred in close proximity to the Tittapajjala village in Hatharaliyadde, Kandy which is home to one of the two famed lineages of dancers, has based his analysis of the Kohomba kankariya refreshing his knowledge gathered over the years as an observer as well as a social anthropologist, by also being an eye-witness at a performance of this ritual held in 2015 in Rangamuwa village of Hatharaliyadde.

Analysing mythical origins of the Kohomba Kankariya, the author finds that apart from this ritual, and the other widely known rituals Gam Maduwa practised in the low-country and the Paththini cult too have originated from legendary myths.

He examines the link-up of Mala Raja who plays an important role in the Kohomba Kankariya with the Paththini mythology.

In the performance of the Kankariya, one of the stories related is about the birth and childhood of Prince Mala. According to the Ramayana myth, the child had been created miraculously out of a flower and referred to as ‘mal kumara’. The name Mala Raja (the word ‘mala’ means flower in Sinhala). Details of this event have been referred to in the publication.

All these religious rituals appear to have a common strand and structural similarities, and the content of the chanted verses and music are very much in evidence of those features.

As the author states, “ to the village observers it is a visual and aural performance which must be understood as totality if the anticipated benefits to him and his community are to follow”.

To illustrate the basic unity of these healing rituals, the author has also enumerated their identifiable common structure, which is possibly the first such attempt by any researcher in the country.

The introduction of Ves Natum which is an integral element of the Kankariya to the Kandy Esala Perahera in 1917 extracting it from the roots of the Kohomba Kankariya ritual and the gradual transformation which is taking place since then has been described in detail by the author in the essay captioned Ves Natum using expressions such as ‘transition from ritual to spectacle’, ‘from cosmic drama to street and stage spectacle’ and ‘ conversion of a religious service, (thewaava) into a ‘Performance’.

As for the Western colonial administrators, it was pure entertainment which they required and the adverse effect it would cause in the long term for a national cultural treasure was not of any concern to them.

Entertaining groups such as roving circuses, animal trainers who visited the country had enticed some of our accomplished performers to join them for performances abroad and sometimes advertised them as “Wild men of Ceylon”.

Kankariya performers traditionally hail form lineages or paramparaawas. It is believed that there are only two such lineages in existence today.

These lineages who are proud of their inheritance, are faithfully bound to preserve all elements of the ritual to the best of their abilities.

It takes about eight to ten years of intensive training to train a person as a Yakdessa dancer.

Initiation into the ornamental head-dress – the Ves Thattuwa is a special event referred to as a Ves Thabeeme Mangalaya held in a Buddhist temple.

The head-dress is treated as an object of sanctity and preserved in a devale from exposure to ritual pollution till it is required for use by the Yakdessa in the ritual.

While mul-yakdessas are used to even observing the tradition of keeping away from home sometimes for around three days to avoid possibilities of ritual pollution on the eve of a Kankariya performance; any tradition-bound observer of the Kankariya today may be lamenting at the transformation this treasured healing ritual is going through in which even young females are also being trained to don the Ves thattuwa in school-training programmes named Kandyan dancing.

The final part of this publication is devoted to provide biographical details of five master performers -Nittawela Gunaya, Titthapajjala Suramba, Sri Jayana, Chitrasena and Makuloluwa for their distinctive contributions for the cause of Kanyan dancing.

The volume is copiously illustrated with a twenty pages photo gallery which include photos of the Kohomba Kankariya held at Rangamuwa in 2015 and some taken earlier by internationally acclaimed masters of photography such as Cartier Bresson, Lionel Wendt and several others.

In addition there are quite a number of photographs depicting different stages of the Kankariya and a few historic photographs of a by-gone era of archival value.

This analytical study in which Amunugama has utilised his sharp observational skills to sociologically analyse and interpret not only the Kohomba Kankariya ritual but also a number of historical legends and age-old myths.

Based on the in-depth knowledge he had gathered over several decades as a researcher and as a scholar, this work is bound to be a publication of lasting value.