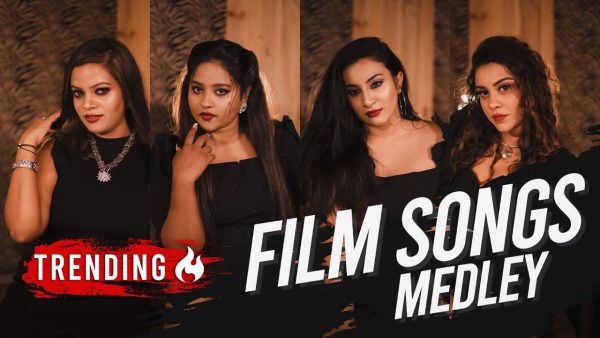 The recent Covid-19 lockdown period had given musicians in ,particular and the general public in general to engage themselves to devote ample time to novel creations as time was accessible in abundance. The joint Aluth Iskole perception of Mariyazelle GUNATILAKE,Kelum SRIMAL,UPALI Sannasgala and Mahesh Denipitiya linking seventy five artistes and singers was very admirable which was a booming triumph. Correspondingly the aspiration of dream star season 2  Upekha Nirmanai de Silva daughter of acclaimed ‘Jolly Seeya”alias Chandu de Silva,too which had been lingering in her mind for sometime to form a female band with a talented foursome, first of its kind in Sri Lanka, was able to get off the blocks in establishing a dynamic foursome with spicy pods in Erandi Madushika Ranaweera, Shashika Madushani Herath and Nirasha Natalie Thillekeratne and of course Upekha de Silva herself as the leader who formed KOCHCH’ by chosing the female unique quartet .The name KOCHCHI has been designed by Upekha herself after much deliberation believing that as it has to be spicy like chilies as desired by her to ideally name ‘KOCHCHI”.They are now exploding with new savory creations to fulfil their goals to the aspirations of music starving fans. All four young singers have their own songs in you tube have proved their essence beyond any doubt.They are all very attractive tremendously talented with innate abilities with voice training and singing expertise to a peak intensity. To add they rhyme and harmonize to unprecedented high levels brilliantly. Hence the foursome possessing hereditary true talent, all who had triumphed in individual respective dream star seasons.The Kochchi spicy group have already become effervescent on stage,has made a name with a massive fans base. growing fast.They have performed admirably at many programs in Swarnavahini, SLRC, Derana cum many television channels and in several musical events.

Apart from Upeka wining the coveted dreaam star season 1 Erandi Madushika was 6th in derana dream star season V1, Shashika in season x1 contest last year was placed 1X.The four including Nirasha Natali Thillekeratne in the quartet were stars in derana dream star competitions. The members of the quartet come from diverse destinations Shashika Madushani has to travel from Mawenella,Erandi from Pasyala Nirasha from Ragama while the leader Upekha hails from Negombo. Nevertheless, girls make mutual arrangements to meet at one point convenient to all to have rehearsals, which is a cumbersome exercise though not that seriously taken as they could easily harmonise notes abruptly with ease . It is learnt that Upeka’s husband TILINA is behind the group in a rigid défense performing all the spadework determinedly of course wholeheartedly should undoubtedly bestow most of the credit.

Just the manner Bathiya Jayakody and Umaria Sinhawansa came to the limelight in show business films, acclaimed film director Udayakantha Warnasuriya has given a similar opportunity to Kochchi group to sing the theme song for his new movie “ginimal Pokura’which is pending release.The name of the song is “Oba kawurudda”, music composition by Udara Samaraweera to the lyrics of Nilar N Cassim. Similarly, several producers of tele dramas and films would be contemplating to give the impressive Kochchi foursome more opportunities. In this context the group is indisputably destined to climb to the apex of stardom as a foursome would be a huge force to be reckoned with.All fans would also wish them from the bottom of their hearts for resounding successes in future ventures.