Situated adjoining the famous Keerimalai Naguleswaram Kovil (a shrine dedicated to Hindu God Shiva, considered as the destroyer of evil) in the northern coast of *Jaffna, this picturesque ancient stepped pool with bright aquamarine water set against the nearby Indian Ocean is a pool which according to locals has healing properties. At present, the site of Keerimalai Springs is a famous tourist attraction.

According to locals, the *Kovil situated in close proximity to springs is an ancient Hindu Temple Complex as it has been mentioned in many Indian religious treatises such as Dakshina Kailasa Puranam and Skanda Puranam and the Kovil had been a pilgrimage center for South Indian Hindus. The pilgrims had bathed in the spring prior to visiting the Kovil.

Keerimalai means ‘mongoose hill’ in vernacular Tamil. Situated towards west of *Palaly in Jaffna, Keerimalai Springs, also known as Keerimalai Pond by locals is shrouded in myth and legend. According to a local legend, a sage had been cursed with a face similar to a mongoose (Herpestidae). He was able to get rid of his physical features after immersing himself in the waters of Keerimalai Springs. Hence, Keermalai Springs is considered as a Sacred Water Spring. According to folklore, Keerimalai Naguleswaram Kovil had also been built by the sage, who was cured after bathing in Keerimalai Springs. 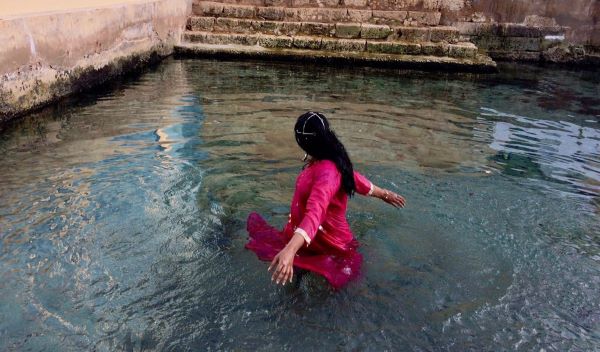 According to folklore, a *Pandyan Princess known as Maruthapura Veeravalli had built the Maviddapuram Murukan, a Hindu Kovil located near Keerimalai Springs when she was healed of her sickness.

As the water flows through the fissures of the carbonated rocks, it acquires chemical values which according to scholars have therapeutic benefit to human body.

Keerimalai Springs is an important place for Hindus and the majority of people who bathe in it are also Hindus, although, at present it has become a tourist attraction and locals of all nationalities bathe in it.

Although, Keerimalai Springs is situated near the sea, the water in the spring is fresh as it comes from an underground freshwater spring.

According to locals, there is a cave complex in close proximity to the spring used for meditation by a mythical sage known as “Nagula Muni”.

Today, the spring is a popular bathing spot among large crowds of local men and boys who splash about in the breathtaking ancient pond overlooking the Indian Ocean, separated by a wall. There is a separate bathing area for women situated behind the main pond structure. Location: About 15 kilometers from Jaffna town