Located at the intersection of Main Street and Fourth Cross Street in Pettah, the commercial hub of Colombo City, Kayman’s Gate (in Sinhala, Kaiman Dorakada) is a historic solitary grey bell tower which was an entrance to former Colombo Fort. St. John’s River, a canal that connected to Beira Lake was located outside the Gate. Waste from Colombo Fort had been dumped to this river.

An integral symbol of Old *Ceylon, “Kayman’s Gate” is derived from the Dutch word “Kaaiman” meaning crocodile as a large number of mugger crocodiles (who flocked in large numbers to eat leftover meat and bones thrown out by Colombo City dwellers who lived inside the fortified bastion) swarmed the moat of Beira Lake.

Kayman’s Gate Bell Tower is a rare evidence of Colonial Era of Sri Lanka, the only evidence of ancient Colombo Fort as the ramparts and gates which existed during that period are not there at present.  Kayman’s Gate had been the east entrance to Colombo Fort during the Portuguese Colonial Era built with the objective of protecting trading interests in Colombo City. During the Portuguese Era, there had been a drawbridge which had been lowered from the gate connecting Fort with the outskirts of Colombo City.

During the Portuguese Era, the Fort has had 12 bastions and intervening ramparts supported by a moat in the east.

Kayman’s Gate Bell Tower dates back to the 16th century when it was originally hung in a Portuguese Church that was dedicated to St. Francis in the *Kingdom of Kotte. When Kotte was abandoned in 1656, the Dutch who later reoccupied it found a bell amongst the ruins of the Church. Later, the bell was relocated to newly-constructed bell tower at Kayman’s Gate.  According to folklore, the bell had been used as a night curfew bell ‘to mark the closing of the Castle’s gates and lights out’.

When Colombo was captured by the British in 1796, they had occupied Pettah after breaching Kayman’s Gate. They had demolished or filled in the walls, barricades, canals as well as moats which existed in Fort. They had also demolished Kayamn’s Gate too, but the Bell Tower had been preserved. 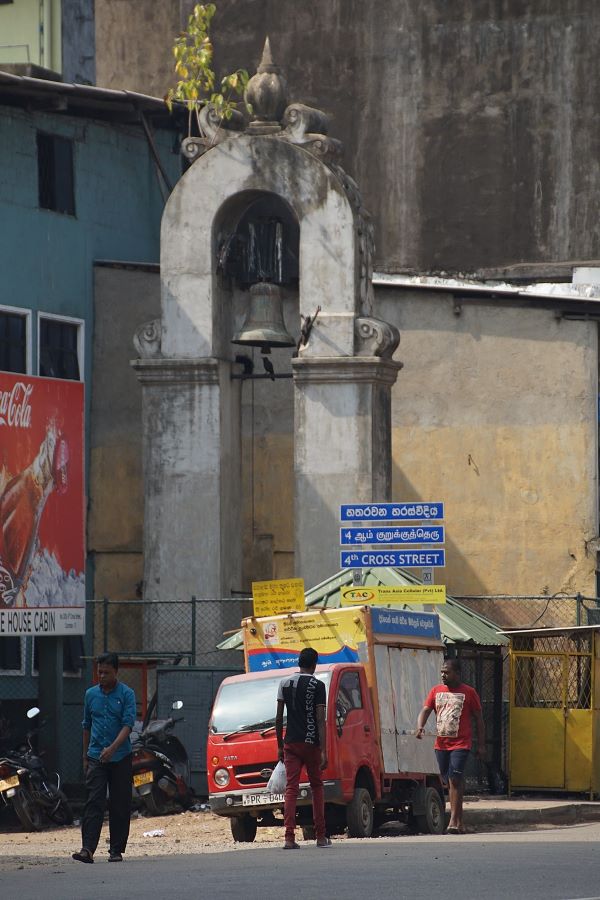 When the walls of the fort were demolished, the bell had been used to summon worshippers to prayer at *Wolvendaal Church and the Bell Tower had been part of the Church property.

The bell is still hung in the Bell Tower and is inscribed as follows:

(meaning “Hail full of grace the Lord is with thee, blessed art thou among women”.

Although, not well-maintained and unnoticed by many in Pettah, Kayman’s Gate is surrounded by a high fence and there is a sign at the premises proclaiming that it is an Archaeological Monument protected by the Director of Archaeology.

(meaning “Selestina, please wait at the Kayman Gate till I come”).