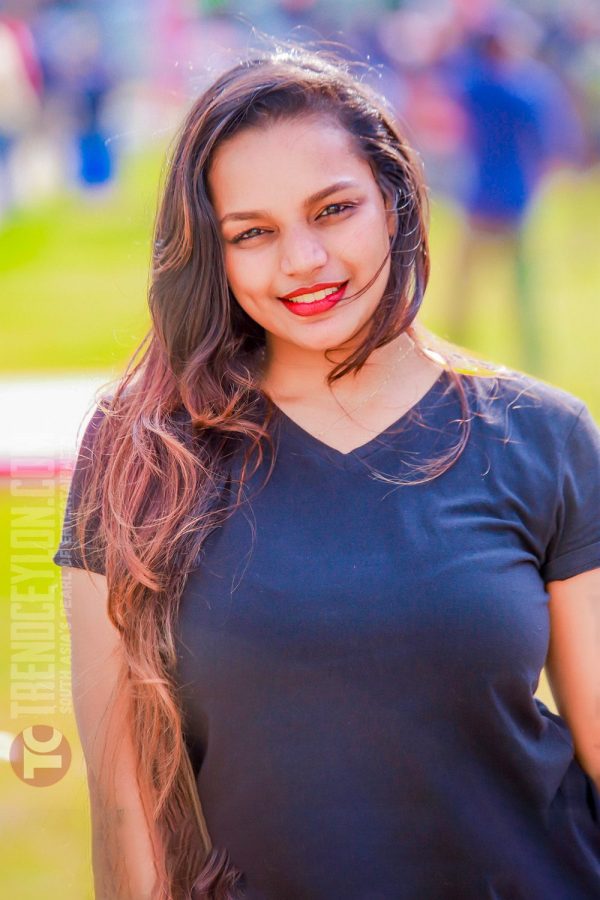 Kavindya Adikari Kavindyaessentially a folk singer ,dancer was born 20th June 1996 to Athula Samitha duo perhaps the most famous singing twosome in the current era. The decade of 1990 is often reminisced as a decade of peace, prosperity, and the growth of the World Wide Web internet in 1992 . Kavindya fits into a part of a Millennial Generation, also known as Generation Y. Millennials, is a generation who grew up with computers, internet, and social networks.

After the marriage of Samitha Mudunkotuwa and Athula Adhikari as all married couples the duo too was interested in having a child. When Samitha was pregnant had visited Venerable Rambukkana Siddartha thera requesting to pen lyrics for a child to be born.The duet became very popular even today the music composition was by Rohana Weerasinghe. Later it had revealed that the lyrics had been made to a daughter. Samitha reminisces the scorching time she underwent when delivering Kavindya at the MacCarthy Nursing home where she had been in the theatre for over six hours.The consultant obstetrician and gynaecologist had been Dr Bunty (N.T) Kurukulasuriya ( who happened to be the writers closest friend from childhood having lived ,played together as neighbours in Mt Lavinia.)As a normal delivery was not at all possible Dr had resorted to a caesarean. As it had been somewhat cumbersome delivery the doctor had summoned Athula to decide whether he preferred the wife or the baby to live. Naturally Athula had consented to save the mother by signing a document.

As the first child Kavindya had been looked after lovingly.During this era the parent duo had been very busy with many musical concerts ,recordings etc, It had been the “Aththamma” Samitha’s mother who had looked after Kavindya, taking her to school and back , for her dancing, ballet, sports classes. Kavindya had confessed that she was so concerned and worries when she had passed away at the age of eighty-six years recently which was one of her darkest days. It is learnt that she had driven the vehicle accompanying Kavindya up to her age of seventy-two years. On Kavindya’s body there are thirteen tattoos engraved. The obsession had commenced when Kavindya had been accompanied by her mother and an aunt for a tattoo to be etched on the latter.As her skin was a bit rough the tattoo had been engraved on Kavindya’s body as her skin is very soft.  The latest tattoo on her hand which is most conspicuous is to reminisce ‘Aththamma” a   “Guardian Angel”. Though all tattoos have been engraved to remember a specific event, the one inscribed for her is most special to Kavindya.

Kavindya had been initially admitted to an international school with a view to grasp the English vernacular. .Her tenure had been constrained only for a few months been suspended for the offence of throwing a stone at a student rupturing the student’s  head.Samitha had then decided to admit her to her alma mater the Buddhist Ladies College. Here too she had continued her unruly activities harassing, injuring many colleague students.A few of much magnitude  rowdy incidents recorded had been pricking a girl’s eye with a ball point pen and pulling an earring of another colleague girl not only hurting but tearing her ear which needed sutures to resuscitate .Despite her nefarious deeds she is a kind individual who helps her colleagues and seniors.  Samitha has been summoned to school several times to warn on Kavindya’s catastrophic behaviour unusual among sister students . Samitha as a practice evaded attending to parent teacher meeting occasions. Samitha on such days has got some assistance from a teacher to find whether to attend or not. Perusing Kavindya’s report warns Samitha not to attend Parent teacher meeting, while her report was brought to the school gate. However very strangely Kavindya’s attitude and susceptible mannerism and studies had taken a drastic change when she was in the ninth standard thereafter  has had good results in the GCE Ordinary Levels. Kavindya has possessed enormous talent for dancing which she performs similar to singing.. Having noticed her talent Samitha Athula duo had sent her to the Channa- Upuli dance academy to be trained where she had blossomed to be a spectacular exponent of dances of many diversities which Kavindya had dominated subsequently to unprecedented tall elevations. which had assisted her to exploit on many stages having the advantage of been an accomplished soloist too. The parent duo also had sent Kavindya for ‘Bellet’ dance classes too under reputed exponent Diana Jayasuriya.Above all Kavindya has inherited singing talents with hereditary affiliations from her parent duo with also having some in born talent.

After Athula had left the family Samitha had endeavoured relentlessly to run the family consisting of Kavindya, younger brother as a cohesive unit forfeiting many desires. Kavindya almost a decade ago precisely in year 2013, had been influenced by Thanuja Akka to come for a screen test to be appointed as a ‘presenter’ -television host which she had hurdled successfully to be somewhat of a sought-after presenter later on. Kavindya has balanced well, her singing profession with the presenter job with her other events.When questioned what job she prefers the prompt answer was none but to stay at home as she loves to relax by sleeping. Her younger brother though a bit quiet had been watchful on happenings on social media platforms which Kavindya and mother are not interested. He used to show and laugh on some posts made by some nefarious individuals who have no work called “Kalakanniyos” term  used to those who waste time on slinging mud at others doing no work. Samitha and Kavindya are not bothered at all, ignore all fictitious posts, being deaf on these social media posts. In one television dialog Kavindya added that before the advent of social media when nonsense was published in the print media Samitha had been apprehensive. Also in a television chat Kavindia reminisced a valiant action of her younger brother. the instant action he took when she had fallen in the washroom with a bleeding head injury and rupture of her lip. After first aid like ice administered at the dwelling , he had organized the  driver  taking her to the nearest ETU ,had informed the medical staff, that the duo were the siblings of Athula and Samitha Thereafter he had informed a family friend according to mother’s instructions. Thereafter only he had contacted mother to tell the episode requesting to come to hospital after completion of her recording. After this heroic deed Kavindya had developed more faith in the younger brother perhaps as he is the only male to act in an emergency. Kavindya summed up saying Malli is a good companion.

Kavindya was thrilled and happy as Athula had attended the ’Aththamma’s”  funeral at her request as his presence had been a tower of strength. During the period Athula was with the family Kavindya had helped in his recordings as of course it is natural for any daughter to be profoundly attached to one’s father.However many will not believe that Kavindya though had sung in so many events, concerts and platforms though sung with Samitha many duets had not sung a single with father. It was after twenty five years that Kavindya had sung popular duets when the duo was invited to Swarnavahini’s  ‘Hitha Illana Tharu’ recently when two other father and daughter duos were also invited v.i.z., Priyasad and daughter Shashendri, Chandrasena Hettiarachchi and daughter Lihini duo were invited which happened to be a program well patronized by many audiences. Kavindya had described father Athula as a very quiet person who liked to live in isolation. She has absolutely no resentment or envy towards him as these issues are decided by above. When questioned on a television dialog Kavindya  had confessed that the two voices of the parent duo is so rare in the musical arena in the country ,it is so sad that the duo have stopped duetting. But Kavindya quipped that is not for ever as the two could make a  come back. Kavindya on numerous stages vocalise father’s songs as duets singing with mother.She appears to have by hearted all lyrics.Kavindya had sung on many platforms including in many television channels in programs like Hitha Illana Tharu,Copy Chat, Laya saha Leya, Coke red. Despite her busy daily busy routines she also looks after her mother’s music school also attend to the payment of bills cum all other domestic chaos and activities in the absence of father.From her small days she has been a lover of English numbers her favourite is Jennifer Lopez whom she follows still.She had lamented that she loses temper too soon but recovers to become normal instantly. Kavindya hates injustice who are not genuine evades associating with such individuals.

Kavindya is often called upon to participate in many forms of television broadcasts .Recently she presented the program “What is in my bag program bold and beautiful,”  very impressively explaining all items which she carries when she goes out proving to be equipped for any situation, her mobile taking pride of place.She elaborated on the usefulness of each item she carries in her bag like so many deodorants ,roll-ons, creams,lotions, note book,pen, many types of medicines etc., which were well explained by her to impress all audiences.

She released her first album, ‘Kirulak’, in 2012. She was then signed to Maharaja Entertainments Pvt Ltd. Kavindya since year 2016 has recorded and launched several official music videos., official lyric videos many albums and MP3 ‘s to delight numerous audiences. Some of the above are “Red Coke”, “Giyaath Dama”, “Thurulu Wennada”,”Pem Heena”, “Athin Allala Kiyanna”,”Amma Unba Suwade’,”Dawasak da Re”,”Amma Umba Suwadey”,”Unmada Chitra”,”Swetha Heena”,”Pinna Pipena”,”Salsapuna Drama Scene”,’Hangagena Sitiya”,”Pawela Kondu Akase”,”E Desa”,”Guru Pare” “ Thurulu Wenna “ Valentine day special” etc etc.The lyrics and music melodies and compositions have been by many talented known novice personnel like Duleep Mirando, Denuwan Perera, Tharu,Yasith,Tharinda Kasun Jayawardena etc. Kavindya had not duetted with many other than Amal Perera, but she believes the voices of Nadeemal and Charmika suits her voice well. Kavidya’s talent in dance recitals need to be emphasized. There are many cover dance videos in the you tube like with Dharshan Thavaraja, “ Hitha Hirikada” dance cover.”Ammo Me thunenage” etc. Kavindya’s immense talent for dance recitals are well demonstrated by her exclusive dance aptitude proved.

Film producer and Director Jayantha Chandrasiri had afforded the opportunity for Kavindya to portray a role in his film ‘’Gharasarapa’ film in year 2018 when she was a total novice, in which main roles were portrayed by many veteran actors like Kamal,Jackson, Sriyantha , Vasantha Vittachchi, Kusum Renu etc. For the role portrayed by Kavindya she was awarded the President’s trophy for the best up and coming actress. In the same film  Samitha for her duet with Bathi Susan was adjudicated the winner for the most popular film song coincidentally.

Kavindya has no plans for the  future , just hopes for a better tomorrow. She lives on enjoying her living, is a firm believer that no one lives for ever.In early life she had thought of settling down at twenty five.Lately she has made up her mind not to marry to remain single giving valid reasons for her decision. Her intention is to look after her mother and brother to her hearts satisfaction and opts to have a contended spinster life. The achievements she had navigated to date are gigantic, all her fans would wish her a more stupendous years ahead.