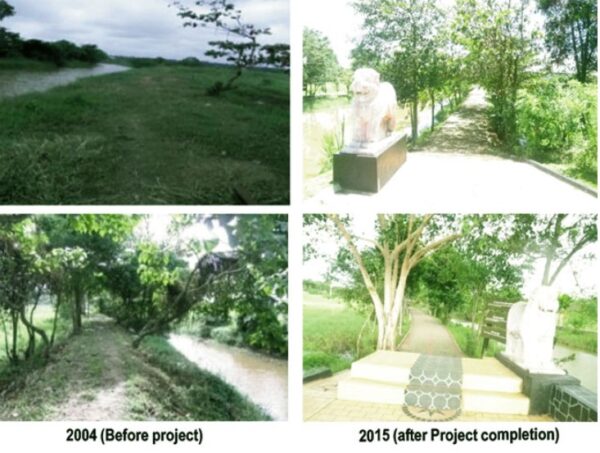 A technical paper on the Gampaha Jogging Track, published in 2012 in an Annual Session hold by the Institution of Engineers, Sri Lanka had won the first prize in a competition on water-related interventions of its members. This is an Interview held by Udula Oushdahami, a Former Chairman of ICTAD, with the author Engr. Mahinda Panapitiya, about the background behind the paper.

Q: Jogging Track Projects in Gampaha District is becoming very popular. The paper you had presented to the Institution of Engineers, Sri Lanka (IESL) had been selected as the best out of other publications related to the water sector. What is the difference between this project and other conventional engineering projects?

A: In this project, a jogging track is highlighted as the main benefit. However, it is only a side benefit of a multidisciplinary project, targeting the total urban environment. For example, if you go through the Master Plan, the Gampaha Jogging Track Project, you will notice that while addressing recreational needs, it was also planned as a Bio Corridor, connecting the isolated Catchment Forest Areas of Uruwal Oya around Plikuutuwa with the Muthurajawela Wetland.

I also perceive this project as a multidisciplinary combined effort of Engineers, Ecologists and Sociologists. Engineering solutions proposed in this project addresses flood mitigation, along riverine environments, while making an effort to address other needs of communities. For example, lack of recreational areas for urban communities is one such need. Forming a narrow jogging track, along the stream banks and around local water bodies in parallel to dredging operation for flood mitigation projects in urban areas, is one such effort. It addresses health aspects of urban communities who are suffering from various illnesses, such as hyper tension, diabetes, due to lack of open areas such as playgrounds for recreational purposes. We also introduced a track around ancient irrigation tanks located in Udugampola, near Gamapha town, for the same purpose without disturbing its engineering and archeological Features. Following website launched, backed with a song about five years ago demonstrate various features of both tracks. Now those tracks are being gradually transformed to some kind of ecological garden, available free of charge for local communities including school children https://www.youtube.com/watch?v=hZCOOdBuFdU

Q: Being a multi-disciplinary project, how did you manage the project to materialise.

A: In fact, the same question was asked by one of the delegates in an Urban Biodiversity conference in India I attended in 2016 to present the same paper. This was my answer. Unless political leaderships realises the importance of preserving natural environment, nothing will materialise on ground. The role played by the Provincial Road Development Authority (WP) in coordinating various agencies responsible for water resource and identifying required local experts also played an important role in making it a success.

Q: Is it happening in India?

A: Not 100%. Indians, while attending the above mentioned seminar said that the project in Sri Lanka is a good lesson for them too because cities like Mumbai is facing a big threat as a result of unauthoriesd land filling along flood plains associated with streams for so called development work initiatd by some politicians who are insensitive to the its impact on the environment. According to them this type of project mentally converts urban communities themselves to become ‘watch dogs’ of their local environment which is deteriorating due to urban pollution.

Q: What are the special engineering features of this project?

A: In our approach, we adopted, there was a net loss in flood retention area as result of track formation because the required earth for the tracks was borrowed only from the stream itself while dredging to mitigate floods. Earth was secured from outside, only when it was necessary, to improve the surface of the track in jogging areas. Track surface was carpeted with interlocks only in a small stretch of the track because jogging on hard surfaces are unhealthy. In the case of the Udugampola tank site, we introduced the track on the side of its catchment area at its spill contour level without disturbing its engineering features. Jogging track around the tank was connected to the Udugampola town via a track laid along its spill tail race canal.

Dredging of stream is the conventional way of flood mitigation. In addition to dredging, we strengthened stream banks against erosion by planting trees because otherwise eroded soil gets deposited in downstream areas and the flood migratory effect gets gradually diminished with time. Riparian tree varieties such as Kumbuk, Karanda, etc., were used for stabilising the river banks. On the other hand Riparian Tree Belts also control the flash flood peaks during rainy periods while cleansing polluted urban water using their root system. Instead of high cost conventional Gabions to strengthen stream bank, we used Coir Gabions as Temporary support until the roots of the newly planted trees take over the function of lining against erosion

Q: Usually trees are being planted along road sides. In this case, it is streams. Is this the first time it’s being tried in Sri Lanka?

A: No. The same concept was introduced by me in System B of the Mahaweli Project in 1995. However, the main objective of that project was to prevent farmers doing cultivation within reservations of natural streams causing soil erosion of banks. Under that project, trees such as Kumbuk, Karanda, etc. were introduced towards waters’ edge of the streams and fruit trees were grown at the edge of reservations bordering paddy fields. Communities adjacent to streams enjoyed the user right of trees planted bordering their boundary. These Riparian belts were also designed to play a role of bio corridors connecting isolated forest patches within agriculture landscapes.

Q: What are the social and environmental benefits of the project?

A: Creation community awareness about the beauty of maintaining clean riverine environment and about the role of Bio Diversity [being played in urban environment is another long-term social benefits expected from this intervention. It is also expected that community members who regularly visit the tracks would become guardians against culprits who pollute natural water bodies by dumping urban wastes and also against people who do illicit land fillings of wetlands bordering the flood plains of streams.

River Banks represent the Aquatic Terrestrial Interface of our nature with high ecological diversity having capability of supporting the growth of climatically sensitive tree species having Ayurvedic Values. Framers along stream banks were also encouraged to grow those trees as a source of additional income.

Q: Could you further explain what you mean by bio-corridor?

A: Bio corridors are in fact “Highways” for wild habitats connecting their isolated forest patches which are their resting places in urban areas. In this particular project, the Bio Corridor connects the Catchment Forest Area of Uruwal Oya around Plikuutuwa with the Muthurajawela Wetland. When those corridors traverse close to humanly populated areas, in this case the Gampaha Town, corridors were sophisticated as a Jogging Track by landscaping. Basically, those corridors are elongated forest belts planted with indigenous trees. Therefore, such belts can also fight against invasive plants which are gradually occupying our uncultivated paddy lands, especially in urban Areas. These tracks also expose those invaded locations to the public. This project is basically an environmental project delivering benefits to the whole district addressing other ecological while creating recreational areas for urban communities.

Q: How about maintaining the project beyond the implementation phase?

A: The implementation phase usually takes two to three years until the newly-planted Riparian trees fully grow to be able to strengthen the river banks. Jogging part covers only a short stretch of the river bank. The rest is a Riparian bio corridor. The maintenance of the jogging path sections is the responsibility of local authorities. There is no need to maintain a balance section after three years because Nature will take care of it with the passage of time. However, if the jogging section is not maintained, it also will eventually transform into a bio corridor and the community would miss the chance of reaping its health benefits. Therefore, the community also has the responsibility for maintaining it by organising themselves or through local government authorities. We also formed a club called Eco-Friendly Sport Club for regulate maintenance of the track before handing it over to the Gampaha Urban Council.

Q: Do you think local authorities such as the Urban Council of Gampaha is capable of doing maintenance?

A: Of course. That is their responsibility. This is a new challenge for them especially because the jogging path is becoming very popular among the Tax Payers who finance the salaries of those councils. For example, the average number of visitors per day, for Gamapaha is more than 100. Recreation is a need of urban community. May be, councils could get lessons from other countries to address the new challenge. In my view the political leaderships of our local bodies, such as Urban Councils, should be creative enough to raise funds for such community-oriented projects by involving private sector institutes, companies, banks, etc. within their command area, because those institutes also have a social responsibility of supporting local institutes such as Urban Councils.

Q: What is the next phase of this project?

A: I perceive this project as an initial awareness creation project among local communities and politicians for a macro level water resource programme focusing on fresh water needs of the future generation of Gampaha District. Fresh water availability is becoming gradually diminishing globally. Though Gampaha is located in a wet zone, global issues such as climate change affects this region too. The present approaches adapted for such as mitigation focus only on issues related to floods. It should be revised to address the issues during drought situations too. For that, there is a need to have a joint effort by the Urban Development Authority, Water Board, Agrarian Development Board, Environment Authority, Irrigation Department, etc. because there is no single authority in Sri Lanka responsible for the water sector. In fact, this project provided ideal stage for them to deliver their services in broader prospective addressing the community needs in a holistic way. What community need is a service addressing whole cross section of them in a multidisciplinary way rather than restricting to objectives relevant to different departments. For example, wetlands along flood plains can be transformed temporary into water storages rather than totally dumping locally fallen rain water into the sea without using at least part of that for human consumption. For example, recently people in Gampaha District had to buy water for drinking purposes during a recent drought just after facing a severe flood in the previous year. In my view, the statement of King Parakranabahu “Not to send a drop of water to sea without using” is applicable to Gampaha, too though it is thought to apply only to the dry zone.