Jayani Senanayake Phenomenal Autographed Actress in Tele Drama, Film and Stage in An Effervescent voyage of over two decades in Stardom – by Sunil Thenabadu 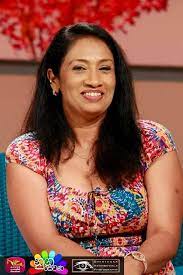 Kapuwela Vidanage Senanayake Mudiyanselage Jayani Chamathka Dharmadasa Senanayake born February 1, 1974 popularly  known  as Jayani Senanayake, is a highly versatile  actress in cinema, theatre and television. She has been termed as the ‘Queen’ in the stage plays.

Jayani recalls her young days from about three years old.She remembers well the little school bag which her mother did for her in pink synthetic.Then about the time when she was taken by her parents to the ‘Chena’ cultivations along with them.They used to carry large sheets which were tied to large branches of trees to form ‘makeshift’ ‘chotillas’ which the kids enjoyed when they were set on motion by swinging., where she has had a wonderful enjoyable young days life with her younger sister Priyanga and four  cousin sisters, her loku amma’s daughters lived front door. These six girls had been up to many mischievous deeds ha played havoc in the village like deeds which boys usually did, like plucking fruits available in abundance, swimming in the lake. The ‘click’ loved to ride big bicycles going doubling too which they loved, often falling and injuring too. Jayani had added that she used to swim and climb a ‘Kumbuk’ tree at the centre of the lake and then dive on to the water.She and her sisters used to get on the bridge on the road and jump into the flowing water beneath, The six had been used to ride bicycles which were ridden by adults had fallen and got wounded several times but still was insisting to ride on them.These girls ‘set’ was very well noted in the village who behaved  just like boys.The parents too did not mind about their activities. They used to ask after how long would they return in order to prepare the afternoon snacks and tea.Her grand mother on return used to ask her how many times you did summersaults. She used to advise to wear a frock or a trouser when performing such deeds as it was safer.

Jayani had commenced her initial education for six months at her father’s village Siyabalagaswewa., Wellaragama Junior school in father’s village. Then Jayani has had her initial education at the Sri Sumangala Vidyalaya in a rural setting in Eppawela..Owing to her passion for acting had entered when she was barely ten years old to be educated at Dhammadinna Vidyalaya,Galkulama and finally from Niwanthakachethiya Vidyalaya  also in Eppawela, Anuradhapura. Initially in school her talents were identified by the teacher Sumithra Dissanayake who wanted her to pursue an acting career ,The motive shifting of schools had been had been owing to exploit her talent in acting. Jayani had also been a good athlete, netball and volleyball player which were identified by her teacher Sagarika Peiris her sports teacher had wanted her to excel in sports and to come as  the sports trainer to her  own school. Though immensely talented in both, she had opted to select acting career as it was simply impossible to prolong in both sports opting for acting owing to obvious factors. She commenced acting on a stage drama while still a schoolgirl. Had won two awards for the best actress in North Central Drama festival which had undoubtedly boosted and encouraged her to unprecedented tall heights. She recollects accepting her awards clad in school uniforms. The stage plays had been ‘Wera’ and ‘Mosam Sulang’ directed by M Dharmasena..It should be mentioned that when the principal of the Guru Vidyalaya in Anuradhapura requested to nominate a young girl to portray roles in two dramas the teacher in her school Sumithra Dissanayake had sans any hesitation nominated her. After which she had lamented that she hardly knew what acting was, believes it was a bit of a hereditary affiliations combined with genes from her mother combined with her own innate talent had contributed to her success. Jayani had asserted that at home there had been some exposure to the subject of drama when her uncle was a fine exponent of the ‘Dolki”, with family members were in the habit of organizing village dramas where her mother was an expert dancer while her uncle was a mature musician.  Jayani in a television hostility had added very modestly that an award she would not consider a real enhancement or an ornament as it was decided by a panel of adjudicators and that she may have just eclipsed another by a small margin on points. She humbly stated that to another panel she would not been adjudicated as the winner. She had also asserted that the award does not mean she is  an exclusive actress as it was only for that portrayal only, she was elected. Jayani also stressed that after winning an award it is the responsibility of the actors to perform to the best of the ability to precision whether the recipient of an award or not. Jayani had been named by her teacher Sumithra Dissanayake in school when the Principal of Anuradhapura Guru Vidyalaya  M Dharmasena’s had asked for a talented student to perform in a drama.Under the  direction of M. Dharmasena had portrayed a role in the drama ‘Wera’, thereafter “Mosam Sulang” for which she had been presented with two awards. She had lamented that this triumph was achieved when she was not at all acquainted with acting, perhaps it would have been her innate talent though with some hereditary affiliations to her mother’s and Uncle’s acting talents.It need to be mentioned that her uncle had produced ‘Kalagola’ drama in the village to which Jayani had portrayed ‘Diththala’ character opposite to his uncle’s ‘Kalagola’ character which had been undoubtedly a moral booster for her future acting career performed at village level yet seriously. This level of acting she had lamented had just come to her automatically again may be via hereditary affiliations through genetic relations.

Jayani’s major triumph in theatre was initially after she entered the university of visual and performing arts,in Colombo wmeeting Wasantha Dukgannarala after his tenure at the Sri Jayawardenapura University when he was  involved  producing  three dramas,’Mangala Kema’,’Dandana’ and ‘Uththama Chariya’.The male roles were portrayed by her brother Mangala Senanayake,Bahnu Prasanna and Mangala Jayaguptha.After her portrayals in these drams tele drama stalwarts Prasanna jayakody, Chandanie Seneviratne and producer of tele dramas Ananda Abeynaike had come to meet Jayani with an invitation to act in a tele drama “Sanda Mawaka” alongside Jayalath Manoratne and Chandanie Seneviratne which was a huge opportunity for young Jayani to show her acting prowess which she had developed to some degree with the  character of “Premawathie”.This was the beginning of Jayani’s illustrious career to follow.She had asserted that for at rehearsals or continuous acting she feels fit as the foundation laid at school sports playing netball and volleyball had given her this strength having captained the under 15,Under 17 and the Under 19 teams in school.Hence a spate of dramas, teledramas and films to undertake was not a challenge to her..

Jayani’s maiden cinematic involvement was in year 2001 in the film “Mathu Yam Dawasa” directed by acclaimed Dharmasena Pathiraja..To date until recently she had been chosen to portray vivid roles which had been discharged to precision.

About her family when questioned also in a television interrogation in life she said a love affair should not essentially end in marriage. Nowadays the trend in a love affair is a bit fierce ending in stabbing or killing which was not the trend in her days. If it was found to have any disagreement the two used to amicably change stances to go their own ways with an understanding says even after such a separation the duo had kept etched in their minds the good the two shared sans taking revenge as in the present days context was non existent..For Jayani love is the most pleasing entity in life.

With the Covid -19 related period many directors had not taken a risk. Jayani had added that during this period she had achieved what she had not been able to do in the past. She had asserted in a television interrogation that she was able to sleep well to cover up her sleep arrears, eat on time, read which is her passion, had also attended to gardening and also she had watched many films which had been backlogged above all living with the entire family as a cohesive unit was a wonderful opportunity,which hitherto had deprived her. Jayani this period devoid of busy acting life asserted was a true blessing in disguise.

Jayani is a very simple leads as a normal woman who goes marketing with many humane qualities. She never camouflages. She dislikes people who are untruth .She gets hurt when hearing griefs of others. At times she feels she is more towards this behaviour.Even today her parents send her all provisions particularly raw rice  from Eppawela by train.She believes it is time she treated her parents.Simply Jayani is a rare human being perhaps not found even in millions. Jayani is a very humble individual who had been in this field for over two decades has won over thirty awards for her acting in stage drama,tele dramas and films.She feels still though she won so many awards she is yet to perform to her expected levels has asserted this very humbly also at a television discussion. All her fans would wish her good health and for her to receive a role to satisfy her ambition to perform the challenging role which she is longing for.