‘Good death’ and the necessity of aesthetics 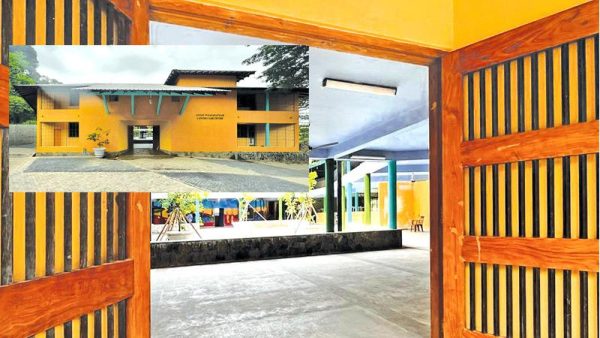 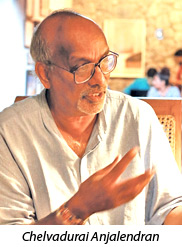 My friend, Chelvadurai Anjalendran has been talking to me about his ‘cancer hospital project’ for quite some time, sending me on and off images of its interior and the construction process via WhatsApp.

But living in Delhi and not having seen the site, I could not fully visualise what he had imagined this space should be like. 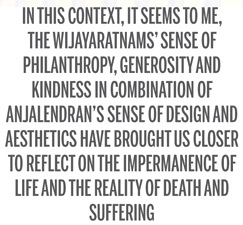 However, knowing his work, I naturally assumed it would be an aesthetic and architectural masterpiece worth talking about at some point in time. It is only recently I paid attention to its benefactors.

He had a vision to build a hospital of this kind after witnessing the hardships of cancer patients, and his wife Yogeswari Wijayaratnam ensured that his dream was turned into reality on the ground. It will be a part of the State health service and gift to humanity and the people of Lanka by the Wijayaratnams.

My interest in this essay is to reflect upon the notion of ‘good death’ and its relation to aesthetics which this entire project seems to epitomise. After all, the centre is conceptualised as a space for terminally ill cancer patients and does not look like most Lankan hospitals in terms of its general presentation of aesthetics with regard to its broad spatial sensibility and the use of colour and light.

This will be the last place patients in this predicament would live, which is why the idea of ‘good death’ is an important notion to reflect upon.

In a report of Institute of Medicine in Washington, ‘’good death’ is understood as the end of a person’s life “free from avoidable distress and suffering for patient, family and caregivers, in general accord with the patient’s and family’s wishes, and reasonably consistent with clinical, cultural and ethical standards.”

But this cannot be achieved only with the use of medicines, medical techniques and equipment, and the comfort of being surrounded by loved ones near the life’s end of an individual.

What is also important is how and where one spends those last moments in life. Homes are too filled with memories, which are not always helpful at such times as they make leaving this life difficult given the way memories link people to the past and to life. And hospitals are often too clinical and impersonal despite the essential services they might provide.

In a sense, it seems to me, Anjalendran has understood this complicated issue and has tried to address it architecturally and aesthetically, but not by removing the space he has created too far away from the needs of the human mind the logistics of care.

It is not that he has tried to replicate ‘homes’ in a neutral space or create a hospital like a hotel. Instead, he has created a space of comfort inherent with aesthetic pleasure while the taken for granted clinically of hospitals have been self-consciously removed.

In a way, particularly in the local and broader South Asian context, he has shown in a spatial and design sense, what hospitals as a specific type of building could be — rather than what they are at present.

Going by what photos indicate, the hospital has been designed based upon a clear understanding and conviction that colour, plenty of light and a proximate connection with nature would make people’s lives happier and more fulfilled.

This specific engagement with colour in the work of Anjalendran comes from his long-term association with Ena de Silva and Barbara Sansoni. In a sense, Anjalendran has brought the kind of aesthetic sensibility he has injected into building people’s private homes as a matter of routine squarely into the midst of this public project too.

One clear feature that makes this engagement with colour clear is the constellation of four large murals that are central aesthetic considerations of the hospital. The two murals in the main building deal with abstract landscapes (one of which is already in place) and the other two designed for the children’s ward present images of birds in a jungle setting. 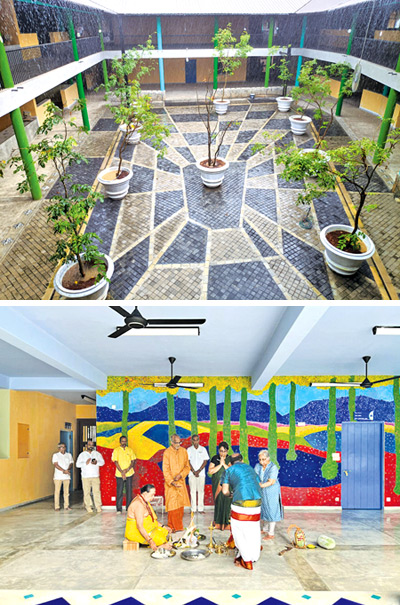 The courtyards and the colours associated with them are easily visible to future patients from their open wards. To me, this is an important intervention that allows for the creative transformation and reinterpretation of the dominantly assumed and the largely placeless personality of a hospital.

In spatial and design terms, this sensibility has been further entrenched by introducing several verandas and a large courtyard that not only aids air circulation, but also offers the feeling that the hospital is not just a building, but a space that is open to the natural world and a more refined world of culture.

The murals referred to earlier also connect the space to a clear idea of both nature and culture in a single pictorial stream. This is particularly important not only in a difficult time in the life of a person when he or she is terminally ill, but also at time when the wider society beyond the space is also seriously ill as indicated by both local and global politics of the present.

Though not the same in purpose and aesthetic sensibilities, ‘Jayam Wijayaratnam Cancer Care Center’ reminded me of the designated lodges in India’s holy city of Varanasi known as ‘salvation homes.’ In comparison, these are simple spaces where men and women who think they have lived their lives, come to spend the last stages of their life and eventually die.

But those who come to these places are not necessarily terminally ill. However, the practice and the availability of these places shows a serious and reflective consideration of the reality of both life and death.

One of the problems in Sri Lankan popular culture and public religion is the relative lack of engagement with the notion of death.

This is despite Buddhism’s – one of the main religions in the country – preoccupation with the notion of impermanence.

In this context, it seems to me, the Wijayaratnams’ sense of philanthropy, generosity and kindness in combination of Anjalendran’s sense of design and aesthetics have brought us closer to reflect on the impermanence of life and the reality of death and suffering. But as a structure, the hospital also offers a clear respite from the reality of suffering and the relative absence of kindness in the wider world by almost allowing people in the last stages of their lives to live in what I consider a poetic interlude bringing to mind the words of the 13th century Persian poet, Jalāl al-Dīn Muammad Rūmī:

“On the day I die,
when I’m being carried
Toward the grave, don’t weep.
Don’t say, he’s gone! He’s gone.
Death has nothing to do
with going away.
The sun sets and
The moon sets, but they’re not gone.
Death is a coming together”.