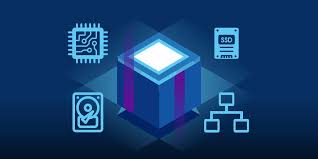 Containers are a new method of deploying applications. They are created using a virtualization method where an OS is shared among multiple applications using a container engine. Unlike a virtual server which communicates using a hypervisor and a guest OS to host user applications, a guest OS on a hypervisor is not required in a container. The benefit of containerization is that containers are highly portable. All libraries, configuration files and other application-level dependencies are packaged inside a container before being deployed. Therefore, there is less configuration required when they are used in other virtual servers and bare metal servers. Often deploying with containers is the least costly method among deployment methods. They can also be easily started and maintained compared to other hosting methods. However, they have less performance compared to bare metal servers and technical expertise on using command-based controls is required to use container-based applications.

Consideration for an application deployment method

Bare metal servers are used for dedicated application-level deployment where a server is not shared with other users and applications. Therefore, these servers are faster in performance and have more configuration options compared to other methods. These servers are used for applications that may need to provide high user response workloads and/or that need higher security by isolating them from other servers. However, maintenance and costs are higher compared to other methods of deployments.

Virtual servers and containers are used when speed, security and performance are less important than the benefits of sharing resources within servers. These servers and containers are less costly to maintain and are easily configurable. Due to the growth of sharing hardware or portability when considering hosting of applications, the use of virtualization to host applications has been growing. While dedicated servers are continued to be used, virtualization of servers and host OS has caused a rapid growth in hosting applications.