Facts about Irena which are not generally known. All of these are from primary sources.

Irena Sendler was born as Irena Krzyżanowska on 15 February 1910 in Warsaw to Dr. Stanisław Krzyżanowski, a physician, and his wife, Janina. Her father died in February 1917 from typhus contracted while treating patients whom his colleagues refused to treat in fear of contracting the disease, among them many Jews. After his death, Jewish community leaders offered her mother help in paying for Sendler’s education. Sendler studied Polish literature at Warsaw University. She opposed the ghetto-bench system that existed at some prewar Polish universities and defaced her grade card. As a result of her public protest she was suspended from the University of Warsaw for three years.

Irena was born in Warsaw in 1910, but she grew up in the town of Otwock, Poland.

Irena’s nameday is October 20, while her birthday is February 15. 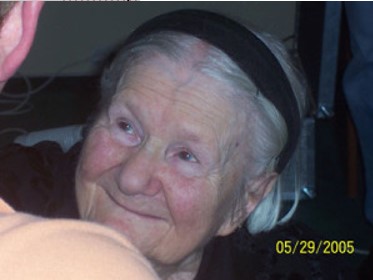 Recognition and remembrance (from the Wikipedia) 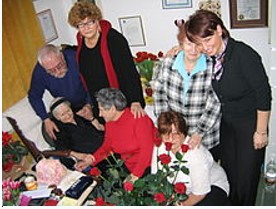 Sendler with some people she saved as children, Warsaw, 2005

Sendler’s achievements were largely unknown in North America until 1999, when students at a high school in Uniontown, Kansas, led by their teacher Norman Conard, produced a play based on their research into her life story, which they called Life in a Jar. The play was a surprising success, staged over 200 times in the United States and abroad, and it significantly contributed to publicizing Sendler’s story. In March 2002, Temple B’nai Jehudah of Kansas City presented Sendler, Conard, and the students who produced the play with its annual award “for contributions made to saving the world” (Tikkun olam award). The play was adapted for television as The Courageous Heart of Irena Sendler (2009), directed by John Kent Harrison, in which Sendler was portrayed by actress Anna Paquin.

In 2003, Pope John Paul II sent Sendler a personal letter praising her wartime efforts. On 10 November 2003, she received the Order of the White Eagle, Poland’s highest civilian decoration, and the Polish-American award, the Jan Karski Award “For Courage and Heart”, given by the American Center of Polish Culture in Washington, D.C.

In 2006, Polish NGOs Centrum Edukacji Obywatelskiej and Stowarzyszenie Dzieci Holocaustu, the Ministry of Foreign Affairs of Poland, and the Life in a Jar Foundation established the Irena Sendler’s Award “For Repairing the World” (pl:Nagroda imienia Ireny Sendlerowej “Za naprawianie świata”), awarded to Polish and American teachers. The Life in a Jar Foundation is a foundation dedicated to promoting the attitude and message of Irena Sendler.

On 14 March 2007, Sendler was honoured by the Senate of Poland, and a year later, on 30 July, by the United States Congress. On 11 April 2007, she received the Order of the Smile; at that time, she was the oldest recipient of the award. In 2007 she became an honorary citizen of the cities of Warsaw and Tarczyn.

Around this time American filmmaker Mary Skinner filmed a documentary, Irena Sendler, In the Name of Their Mothers (Polish: Dzieci Ireny Sendlerowej), featuring the last interviews Sendler gave before her death. The film made its national U.S. broadcast premiere through KQED Presents on PBS in May 2011 in honor of Holocaust Remembrance Day and went on to receive several awards, including the 2012 Gracie Award for outstanding public television documentaries.

In 2010 a memorial plaque commemorating Sendler was added to the wall of 2 Pawińskiego Street in Warsaw – a building in which she worked from 1932 to 1935. In 2015 she was honoured with another memorial plaque at 6 Ludwiki Street, where she lived from the 1930s to 1943. Several schools in Poland have also been named after her.

In 2013 the walkway in front of the POLIN Museum of the History of Polish Jews in Warsaw was named after Sendler.

In 2016, a permanent exhibit was established to honor Sendler’s life at the Lowell Milken Center for Unsung Heroes museum, in Fort Scott, KS.

Gal Gadot has been cast to play Sendler in a historic thriller written by Justine Juel Gillmer and produced by Pilot Wave.

On February 15, 2020, Google celebrated her 110th birthday with a Google Doodle.

In 2010, Polish historian Anna Mieszkowska wrote a biography Irena Sendler: Mother of the Children of the Holocaust. In 2011, Jack Mayer tells the story of the four Kansas school girls and their discovery of Irena Sendler in his novel Life in a Jar: The Irena Sendler Project.

In 2016, Irena’s Children, a book about Sendler written by Tilar J. Mazzeo, was released by Simon & Schuster. A version adapted to be read by children was created by Mary Cronk Farell. Another children’s picture book titled Jars of Hope: How One Woman Helped Save 2,500 Children During the Holocaust, is written by Jennifer Roy.

Sendlerowa. W ukryciu (‘Sendler: In Hiding’), a biography and book about the people and events related to Sendler’s wartime activities, was written by Anna Bikont and published in 2017. The book received the 2018 Ryszard Kapuściński Award for Literary Reportage.