Inspirational Messages from the Olympics 2021 in Tokyo 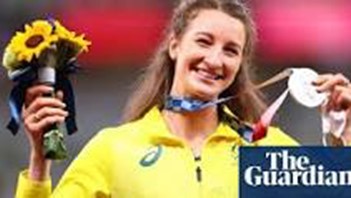 Do you recall the wonderful Sunday School song, ‘Silver and Gold I have none, but what I have I give Thee, but in the Name of Jesus Christ of Nazareth, rise up and walk’. Acts 3:1-10. Well, Nicola has certainly done even more inside the gates of this years 20-21 Olympics, running and leaping on the high jump and giving all her praise to her Lord Jesus before the world.

Isn’t it wonderful when God’s people step out in faith, but also continue to faithfully keep their own lives clear within, live in honour to God, even when the evil values of this world encroach. In the letter of 2 Timothy 2:18-23, it shows us the importance of cleansing our own hearts daily so that we are prepared for every good work, to flee youthful lusts and pursue righteousness, faith and love, and peace, calling on the Lord with a pure heart, desire to excel, becoming usable vessels of honour in the Master’s hand. God’s eternal perspective and value on our work and ministry, lives and families is founded in God’s intrinsic love and value for us, for He made us in His image, not simply for the attribution we are to the world, or our social status, and or even dollars and cents. He is our maker and won us back on the Cross, bought by His Blood and risen authority, He has a claim on us, twice over!

Michael Gleeson in the SMH, wrote on 8 Aug, 2021, “Nicola McDermott has a higher drive. …high enough to win an Olympic silver medal, to jump higher than any Australian woman has ever jumped and to deliver a medal in the event Australia had not witnessed in nearly 60 years. Three times this year she has set new national records. The last two times she has broken her own record. Before April, no Australian woman had jumped two metres but now, after jumping 2.02m to win silver in Tokyo, she is teasing at the idea that the world record 2.09m is in her reach. …She arrived at the Games hoping for a personal best, knowing that anything above two metres would put her in the medal frame. And it did. “Knowing I am with God,” she said. “He has been with me every single training session and I am carrying a message bigger than myself. He is going to make this new.” … She says “I love Jesus”. She longs for a day when crowds fill stadiums as they did for …Billy Graham. 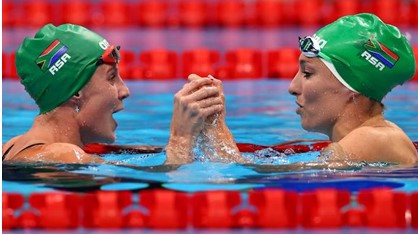 Tatjana Schoenmaker — an Olympic swimmer from South Africa — set a new record Wednesday in the women’s 200-meter breaststroke, and using her success to point others to God. The swimmer finished the preliminary round with a time of 2:19.16.Schoenmaker has used her platform to discuss her Christian faith before.

The 24-year-old Olympian broke another record in the preliminary rounds for the 100-meter breaststroke with a time of 1:04.82. She ended up claiming the silver medal in the Monday event, Sportsnet reported. In her final 200-meter breaststroke on Thur, she won the gold medal in 2:18.95 seconds.

In all her competitions in Tokyo, Schoenmaker has worn a white cap underneath her green South African swim cap, proclaiming her faith — She used her spotlight to point others to God. The white cap has a Jesus fish and the phrase “Soli Deo Gloria,” which means “Glory to God alone,” printed on its side.

Before the competitions, she took to social media to openly express her Christian faith and pray to God to give her peace and an attitude of gratitude no matter the outcome. “Father God, may Your will be done, may Your peace fill us up, may we praise You no matter what the outcome, may we be empowered by Your strength to give our all and may we forever be in awe of Your goodness!” she wrote in an Instagram post as she travelled to Tokyo for the Olympics. “Thank You for bringing us to this very moment.” 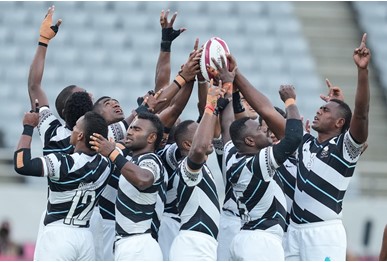 Fiji’s seven-man Rugby team broke into a song of worship when gold medals were hung around their necks at the Tokyo summer Olympics after they stunned New Zealand 27-12. It was their second, back-to-back gold, and for such a small nation in the South Pacific, monumental.

In a time of self-aggrandizing superstars and political propagandists, a showing of sheer joy and spontaneous rejoicing to God is refreshing. The words of their triumphal song come from Revelation 12:11 ‘And they overcame him by the blood of the Lamb and by the word of their testimony, and they did not love their lives to the death’.

Fiji won 2021 Olympics rugby, their victory is also a highlight to Fijians who are currently languishing under strict lockdown, being scourged by Covid. “Last Olympics we gathered in numbers, tears flowed and bells were rung. Tonight in the middle of a pandemic and (with) Fiji under curfew, pots and pans ring, fireworks go off in yards and the cheers from every house can be heard,” tweeted Fiji Broadcasting Corporation …Jaquee Speight.

Due to Covid, Fiji players were called upon to practice 5 months in quarantine. That meant, they couldn’t go home and see their families, and some of  the players barely stood the pressure of being away. Captain Jerry Tuwai, who was part of the team that won five years ago, said his second gold was “more special because we’ve been away from our family for about five or six months.”

The Fijians never left in question their superiority, maintaining their lead from start to finish. By the first half, they scored three tries and led 19-12. In the second half, Asaeli Tuivuaka raced over to score in the right corner with about two minutes remaining, solidifying their victory.

“My baby boy is one year old now, and I haven’t seen him for five months,” Asaeli said. “I didn’t even get to kiss him goodbye when I left, it is tough for me.” Sevens rugby is a scaled-down version of the usual 15 player rugby. … “We don’t have access to the financial doorways like a lot of big teams do,” said then-captain Akapusi Qera. “But we know that there is a God that we serve and he provides for us and is there for us. We know that our strength is not from us but from God, and it’s all God’s plan. Faith helps keep us together. It helps bond us as a team.”

Rugby is the official sport of Fiji. “Christian missionaries brought religion and rugby to the islands and the two remained entwined,” said Adam Perrin, who filmed a documentary called “Pacific Warriors,” as quoted on Christian Today. “Faith and rugby are a big part of who they are.” Team players hold daily devotions together.

“My faith is my superpower,” said Vereniki Goneva, part of the 2016 Fiji team. “We know that our source of strength and power is from God.”