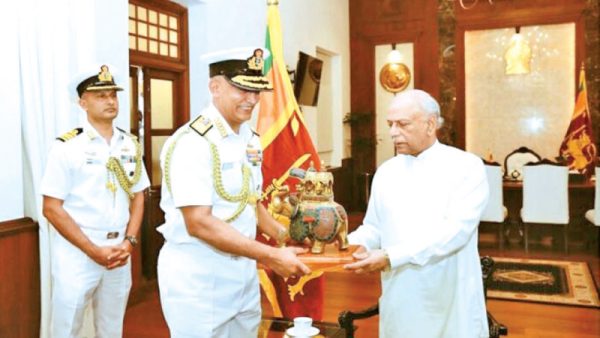 Indian Navy Chief, Admiral R. Hari Kumar stressed India’s absolute commitment to work in close cooperation with the Sri Lanka Navy under Prime Minister Narendra Modi’s concept of SAGAR (Security and Growth for All in the Region). He said this when he called on Prime Minister Dinesh Gunawardena at the Prime Minister’s Office in Colombo on Wednesday (December 14).

The Indian Navy Commander’s visit, along with the arrival of Indian Naval Ship Sahyadri, a multi-role missile frigate of the Indian Navy is another landmark of the maritime cooperation between the two Indian Ocean neighbours. Analysts also point out that these two incidents have marked Sri Lanka’s impartiality in its dealings with maritime powers. Although Indian experts were irked by Sri Lanka’s decision to allow a Chinese satellite tracking vessel to enter its ports in August this year, the two neighbours seem to have smoothened the ruffled relationship as evident from the visit by Indian Navy Chef and the INS Sahyadri, which is a Shivalik-class stealth multi-role frigate built for the Indian Navy. The Shivalik-class features improved stealth and land attack capabilities over the preceding Talwar-class frigates. 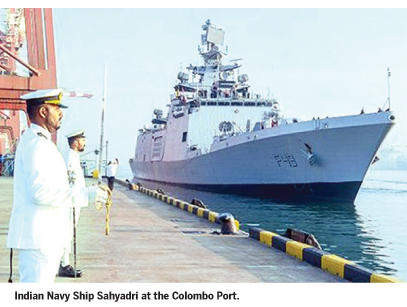 The Chinese satellite tracking military vessel ‘Yuan Wang 5’ became a source of diplomatic strain between India and Sri Lanka after Colombo approved its arrival to the southern Hambantota Port in July, despite India raising concern. Later, Sri Lanka requested China to defer the arrival of the ship to August 11 to 16. Apart from India, the United States, too, had conveyed its apprehensions to Sri Lankan authorities at the highest levels. But the Chinese vessel entered the Port and left after five days and two sides said it did not indulge in joint exercises and it was in the port only to obtain refueling and other facilities.

Visiting Indian Navy Chief received a warm welcome in Sri Lanka. He called on President Ranil Wickremesinghe and also participated as the Chief Guest at the passing out parade of Sri Lanka’s Naval and Maritime Academy, in the eastern Trincomalee district.

Sri Lankan leaders always clarified that Sri Lanka’s biggest asset is its strategic location and the prime interest of the Government is to keep the Indian Ocean as a zone of peace for free commercial navigation. The country has no interest whatsoever in getting involved in regional or international power games. Sri Lanka treats every nation as a friend, while zealously guarding the sovereignty and independence of the country.

Ports in Sri Lanka were popular with commercial vessels of the traders and the country continued to provide facilities to vessels from all corners of the world. Even today, vessels of many countries call on Sri Lankan ports and occasionally there are naval crafts calling on for replenishments, joint military exercises or on friendly calls. During all these Sri Lanka strictly maintains the condition that such visits are not directed against the interests of a third country as Sri Lanka strictly adheres to its policy of neutrality.

The differences of opinion over the entry of Chinese vessel could be solved as there is a very good understanding between Sri Lanka and its immediate neighbour India as well as the United States. The friendship and cooperation with India was further stressed this week during Navy Chief Admiral Hari Kumar’s visit.

Prime Minister Dinesh Gunawardena emphasized the importance of ties with India. “The deep, longstanding ties between our two countries have promoted our common strategies for development and enriched our cultures”, he said.

Indian High Commission said, the visit of CNS symbolises strong relations and close cooperation between the two countries, with Sri Lanka being accorded the status of ‘Priority One’ partner by India. It would strengthen the existing bilateral maritime relations between the two countries, and areas of common security concern and enhancing capacity and capability building initiatives towards ensuring peace in the region would be discussed during the visit. The visit is also indicative of the growing camaraderie and friendship between the two nations in line with India’s ‘Neighbourhood First’ policy.