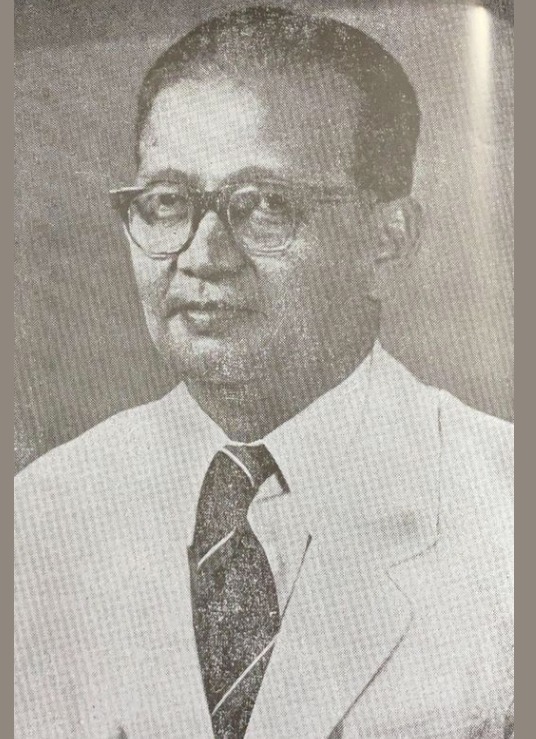 On this day, July 14th 2022, we commemorate the 22 nd Death Anniversary of the late Mr. J.S.L. Fernando, the legendary former Headmaster of S. Thomas’ Preparatory School, Kollupitiya. Twenty-two years ago, a humble schoolmaster who touched the lives of hundreds of young students, members of his staff, past students and parents, family, extended family, friends and relations and so many others, passed away from our midst, after a long and productive 85 years. His life ought not to be measured by years, rather, by the extent of service he rendered to the community, by the firm influence he brought to bear upon by his humility and simplicity, by his many acts of kindness and concern for those who needed it most, and those lives he touched in so many untold ways.

This, was the life that of J.S.L. Fernando.

John Shelton Leslie Fernando (popularly known as J.S.L, & albeit by his many students who called him ‘Hedda’ was the eldest in a family of five children. He was born at Moratuwa on August 30, 1915 to wealthy parents both of whom had inherited considerable wealth and property.  J.S.L’s father John Simon Fernando built up a flourishing furniture business that bore the name of his father – P.S. Fernando & Company, founded around 1900 at Keyser Street, Pettah. J.S. Fernando was a lay representative of the Methodist Church and his mother Dona Elsie Fernando (nee Peiris) was the daughter of Mr.& Mrs. D.F. Peiris of Donnington, Ward Place, Colombo 7.

Moratuwa, from where he gained admission in the mid – 1920s to S. Thomas’ College Mount Lavinia, during the time that the Revd. Kenneth MacPherson was its Warden. He continued his secondary education under the stewardship of its most illustrious Warden, the late Revd. Canon R.S. de Saram.

While at school, J.S.L. enjoyed the great privilege of coming under the tutelage and influence of three spiritual giants – Warden de Saram himself, Dr. Rollo L. Hayman (Sub-Warden) and Revd. Canon Arthur John Foster, Chaplain of the school. J.S.L. later entered the University College, Colombo, and read for a General Arts degree offering economics, and graduated subsequently from the University of London. Having arranged to pursue post-graduate studies in England, J.S.L. had to abandon these plans as a result of World War II raging over Britain and Europe, and his father falling ill. He was compelled to embark upon a career in Ceylon, and also perhaps as his father wished for him to take over and manage the flourishing family business. However, the young graduate had other ideas and fulfilled them without disappointing his ailing father. Aspiring to become a Chartered Accountant, and also conscious of the fact that his Mother wanted him to become a Minister of the Methodist Church, J.S.L. could easily have walked in- to any profession. But none of these attracted him. Forsaking the prospects of ascending to the topmost heights of the then professional, academic, and business fields, J.S.L. chose to serve his fellowmen in the most demanding yet least lucrative and humble of professions, teaching. Whilst teaching for a short period at

Richmond College, Galle, in or about 1941, he was invited by W.T. Keble to join the staff of S. Thomas’ Preparatory School, Kollupitiya, which he did on January 1, 1942, when that school was still in its infancy.

From this point onwards he never turned back until he laid down the reins of office on December 31, 1994, after a record innings of Fifty-Three (53) years during the first Twenty-Five (25) of which he served on the tutorial staff and the latter Twenty-Eight (28) as Headmaster. His teaching career spanned generation to generation, taking in his stride lessons in Scripture, History, English Literature, English Language, Poetry, and Civics and so on. J.S.L. having cultivated old-world values and standards during his lifetime, passed on these admirable qualities to his own young wards at the Preparatory School. Integrity and discipline became the hallmarks of his administration as Headmaster.

He took office as the third Headmaster on September 1, 1966. He was highly respected & and deeply loved by his students and his staff alike. Many are the life lessons learned from him that guide his wards to this day, irrespective of position, status or stature. Anecdotes are fondly remembered and passed on from Father to son, those that were fortunate enough to be taught by him, and whose experiences are spoken of, literally through generations. His impact on the Prepite Community was unparalleled and visibly obvious to those that could literally see the students who benefitted from it.

Mr. J. S. L. Fernando, was primarily responsible for setting up of the Old Boys Union by formalizing a gathering of past Prepites, on March 12th 1978, with a view to setting up an association, now officially termed the S. Thomas’ Preparatory School Old Boys Union which coincided with the commemoration of the fortieth Anniversary of the School,

He also played a decisive role at a time when the Church of Ceylon was contemplating shifting the School to another location, in order to raise much needed funds to attend to its activities. On two such occasions, Mr. Fernando, together with a delegation of Old Boys, was instrumental in spearheading the campaign to persuade the Bishop of Colombo and the trustees to let the running of the school continue in its present location. It is probable that the then students at Prep School carried on oblivious to any thoughts of how close they had come to being displaced from their ‘home by the rolling billows’. Prepites of all generations must be grateful to Headmaster J. S. L. Fernando and his OBU Delegates for their actions in this connection.

The OBU has worked closely with the late headmaster J. S. L. Fernando in matters connected to the construction, renovation, and upkeep of school buildings, developing the School library and in awarding scholarships to deserving students. In recognition of the significant role played by Mr. Fernando and the cordial working relationship the OBU had with him, a decision was taken to rename the school library as the J. S. L. Fernando Commemorative Library.

The Old Boys’ Union currently continues to offer multiple scholarships and also awards prizes in memory of Mr. J. S. L. Fernando, in appreciation of his services to the OBU and to the School.

The administrative space which is to be used as the Prep OBU Secretariat and due to be declared open on 14th July 2022 at Fortrose, is also dedicated to the memory of the late Mr. J. S. L. Fernando, who was the pivotal factor in the formation of this association, & an undeniable source of strength during his tenure, both for the School & for the Old Boys’ Union.

Generations of Prep School boys will remember for all time his utter commitment and every Prepite, young and old, whose life he touched at some point or other will at anytime, anywhere, stand

up and salute the memory of a humble Headmaster who spent his very life in the service of his school.

It ought to be mentioned here that his wife Erica Fernando (nee Amarasuriya) graciously extended valuable support to him in his arduous duties. Having been a much loved and efficient teacher at Bishop’s College and Headmistress of the primary School, Colombo, she played a quiet, gentle, dignified role as Headmasters wife.

On December 31, 1994, J.S.L. Fernando bade an emotional farewell to S. Thomas’ Preparatory School, handing over the reins to Attorney-at-Law Nicholas Yohesan Casie Chetty. The thought of retirement did not sit easy with him. On the contrary, though slow in movement and physical activity, his mind and faculties were, for his age, reasonably alert and sharp.

After retirement, He extended his patronage to the Ceylon Bible Society, the Scout Council, the Salvation Army, and to the Revd. Celestine Fernando Memorial Foundation amongst others.

Even though he lived a long and fruitful life of Eight-Five (85) years, his somewhat sudden death, came as a rude shock and caused immense grief among all who knew him.

In the final analysis, J.S.L. Fernando needs no portrait or plaque, to be remembered by.

His memory and lifetimes work continues unabated, within the hearts and minds of men, aspiring to live their lives by applying the lessons learnt, both academic and life, and propagating the fundamental rules that would ultimately define a Prepite from amongst the rest of the flock.

Prepites, in short, are for the better for having known him.

May the peace and rest he has earned and deserved, be his reward in the hereafter.