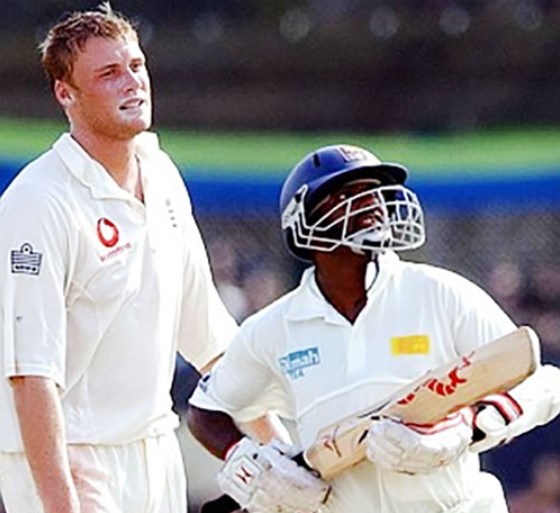 Muttiah Muralitharan and Andrew Flintoff were team mates at Lancashire. During a tour of Sri Lanka in 2003, Flitnoff lends one of his bats to Murali, a gesture that would get him in trouble with England hierarchy.

Spin icon Muttiah Muralitharan is a fiercest competitor in cricket, but he is also known for his friendly nature. He is hugely popular among both team mates and opponents. You would hardly come across someone who has something nasty to say about Murali; it’s like finding a needle in haystack. Indian all-rounder Hardik Pandya gifting a bat to his Sri Lankan counterpart Chamika Karunaratne made headlines both here and across the Palk Strait. However, much before this, England all-rounder Andrew Flintoff lending Murali a bat made headlines.

Murali and Andrew Flintoff were great mates. They were team-mates at Old Trafford when Murali was Lancashire’s overseas signing.

In 2003, when England came to Colombo for their winter tour, Flintoff was a rising star. Three years later he would go onto become England captain. In his book ‘Second Innings’, Flintoff recalls his camaraderie with Murali.

“In that series, it panned out that I wasn’t bowling too much short stuff at Murali and he wasn’t bowling too many doosras at me. Which was a bit naughty, I can see that. I’d had dinner with him the night before one match. Murali said, ‘Fred, I haven’t got any bats left. Can I borrow one of yours?’ It was a bit tricky because Nasser Hussein had put a ban on us even talking to Murali. We were supposed to be freezing him out,” Flintoff recalls.

“Murali tried again on the morning of the match, asking for a word. Nasser was glaring at me from a distance, clearly very unhappy. So I said to Murali as quickly as possible, ‘When we go out to field, go into the England dressing room. Just nip in the back door and take one of my bats – but keep the whole thing under your hat.’

“Once the match was under way and we took a few Sri Lankan wickets, Nasser brought me on to bowl out the tail, as was the plan in those days. Out strides Murali, carrying my bat. Nasser, meanwhile, talks me through the plan. ‘I want you to go at him. Short stuff.’

“Hmm. Tricky one this, on lots of levels, especially given the status of bouncers and doosras for me and Murali.

‘Nasser, I think I can get a yorker through him, nice and full will do the job here,’ Flintoff tells Hussein.

Flintoff doesn’t sour his relationship with Murali. So he decides to pin Sri Lanka’s number 11 with a yorker instead of a bouncer. ‘No, I’m going to try and bowl him. Hit the stumps. Job done,’ he tells himself.

“So, I ran in, trying to bowl a yorker, directly against instructions. Didn’t get through. In fact, it found the middle of the bat, my bat – good middle it had, too.”

“Nasser threw all his toys out of the pram. I was taken off. Then Murali started charging the other bowlers, smashing them.

“After one huge six, Murali walks between me and Nasser at the change of ends. I can see Nasser ready to explode. Murali has a huge grin on his face: ‘F****** good bat, Freddie.”

Sri Lanka won the match by an innings and 225 runs to seal the series. Any guesses about Player of the Series; Muttiah Muralitharan.