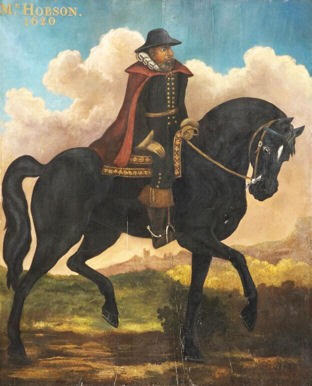 Way back in the 16th century there lived a man in Cambridge by the name of Thomas Hobson.

He rented and sold horses and was the proud owner of a stable that had 40 stallions of all colours and breeds. Anyone who wanted to rent a horse from him to ride the paddock or journey into the far horizon, paid money and got a horse. There was one condition, the renter was not allowed to select the horse. The ‘wanna be’ rider had only one choice. He had to take the horse that was in the stall nearest to the door. It was a simple matter of either ‘take it or leave it.’  When the word spread about this, it became known among possible horse renters that what they got was ‘Hobson’s Choice’.

Yet, they had one guarantee.  The Hobson customer always got a horse to ride.

Now let me take you to the “Homben Yana” choice segment of my story. First let me explain what ‘Homben Yana’ means. You crawl on all fours with your head bent down and your chin digging into the ground.   Of course, we don’t have a Thomas Hobson and 40 horses locked up in a fancy stable. What we, the sons and daughters of Sri Lanka have for choice is the one and only Diyawanna Oya to rule us. Sadly instead of 40 steeds, our inheritance is at least 40 thieves, like in the Ali Baba fable. Oh no, we are certainly not going to get stallions to ride into the glorious sunset simply because we thought we voted sensibly! What we received in return after every election is another 5 years of Homben Yana prosperity. For 73 years of a pretentious democracy that is all we got. Whatever political choices we made, we ended up with our chin shoved to the ground, that is what I mean when I say we are a “Homben Yana” proletariat that is perpetually crawling an unassailable Calvary.

Sri Lankans stood up proudly and faced the new world with hopes running high when we received our freedom from the Colonial Masters in 1948. Yes, we were a united people of an independent paradise isle. But, from then on it has been a slow slide, as the average Sri Lankan struggled to find answers to the ever-multiplying woes the country’s leadership brought upon its eternally suffering citizens. Let’s look at the recent past, the 21st century. The ethnic war was in full swing when the new millennium dawned in the year 2000.  We all breathed a sigh of relief when the 30-year-old carnage ended in 2009 at Nandikadal. That entire story is best left in the past; too many people from all races and all religions suffered when unmarked graves or mounds of earth buried the victims of the miserable war. Then came the hope of peace, along with the blessed promise of prosperity.  Things did change, less for some, more for others, but things did change for the better. But, unfortunately this euphoria didn’t last long. People were forced back to the ‘Homben Yana’ syndrome. Undoubtedly, the minorities got most of the flak.

Presidential Elections came in 2015 and Diyawanna Oya changed colours. The winners had a Clarion Call that reverberated ‘corruption, corruption, corruption’ in flashing neon. Nepotism and power-abuse were also added to the sin-list along with other misdeeds with which the winners branded the defeated. New hopes began to sprout and the Homben Giya ordinary men and women slowly rose to their feet pleading that the new brooms sweep Lanka clean.

A bright and beautiful life filled with marsh-mellow dreams was offered to the masses by the new coalition regime occupying Diyawanna Oya. We, the Homben Yana population of Lanka came out of the blocks like Olympic sprinters, full of whim and vigor. New appointments were made to bring justice to the fore. This committee and that commission went into action to crucify the culprits who supposedly stole from our national wealth. Yes, they erected the cross at Galle Face Green and brought in the nails and the hammer, ‘full of sound and fury’ like the Bard quoted, but alas! There was no one to crucify. Everyone walked away, as innocent as new born babies; it appeared the new brooms didn’t sweep at all. I only read in the papers the likes of a school principal who was sentenced to 5 years of rigorous imprisonment for taking a bribe to admit a student to her school!!!

We can leave all that for now and take a time-out to give a rousing cheer to 007 the Bond man who came from Singapore. Of course, he had friends and that too in the right places. So, he did what he wanted to do and high-tailed it to Singapore and perhaps, as I write, is sipping a chilled Margarita sitting on a wicker chair in the prestigious Raffles Hotel. And we who have lost 11 billion (could be much more – I don’t know) came back to our Homben Yana status while helplessly despising Diyawanna Oya for its unbelievable tomfoolery!  There goes a pompous fairy-tale, if ever there was one.

2019 brought in another change. Those who had been in the freezer for 5 long years marched back to Diyawanna Oya like saints on parade. A few new faces were in the team but most were the same horses that ran the old race. As for us, our hopes skyrocketed as high as kites.  Before anyone or anything could settle into the minted path of prosperity, Covid-19 took over the entire planet.  Everybody was swimming upstream in the waters off a busted dam and everybody was blaming everything on the Corona Pandemic. Between election gatherings and Port City scrambles and opening LCs for luxury cars the government got their priorities mixed up.  If Sri Lanka trimmed their boast of controlling Corona to a whisper and got their act together, I am sure we could have done better in handling the ramifications of the pandemic. 2/3 majority and 20th amendment were handy tools to govern with, but unfortunately Corvid -19 would not give a hoot to all that autocratic power.

It all boiled down to how well the planning was done and how efficiently the powers handled the situation. Today most people have become partners of the ‘Homben Yana’ clan, not by choice, but by sheer circumstances. Everyone knows that with the current time and mood it is difficult to govern, but the question is are we handling the catastrophe in the best possible way or have we become poor ‘also rans’ with no clear answers in sight?  When a young university student told me that she and her mother and father shared a packet of rice for the day, doesn’t that tell the whole story?  That’s all they had to eat. It is not just them, but millions who live below the poverty line suffer a similar fate.

In the current state of the country the future does look fractured and bleak. The front pages of the newspapers are always full of political tugs-o-war and on the evening TV “Face the Nation” is filled with the ‘wise’ and the ‘not-so-wise’ lambasting their party oppositions mostly in a meaningless melee. All that is fine for us the ‘Homben Yana’ TV audiences. But what is difficult to stomach is the senseless and super-stupid arguments some ‘Kade Yana’ buffoons bring out to defend their political godfathers. Many a truth is crushed and trampled and discarded and we watch the programs like fools simply because we have no choice. Whether they be ‘in power’ or ‘out of power’ seldom would we hear anything that resembles the truth.

So where can the average you and I find the logic to cast our vote?  How do we evaluate the pros and cons of Diyawanna Oya to come to some reasonable conclusion to nominate a candidate?………. Come election time do we follow the same script as we did for 73 years and send some local Einsteins to parliament. Are we going to get our usual Hobson’s Choice? Are we willing to go another 5 years dragging our chins on the ground with yet another ‘Homben Yana’ result?

As far as Diyawanna Oya is concerned in its current state in July 2021 one can see a ripple or two of discontentment that crawls like a weed-clogged wave. Looks like the horoscope is indicating possibilities of turbulence and probabilities of apple-carts tumbling down. All that is fine, but what is the answer for the long-suffering denizens of Mother Lanka? Whom do we vote for?  Sure, among the so-called exalted leaders of the land there are a few who toe an honest line. Honest and determined people who want to change the tide. But would they get the ballot to be selected?

Three more years to run before we go to the polls again. It is difficult to know what is in store as the Covid-19 is currently dictating terms and no one has the faintest idea how long this miserable pandemic will last.

Apart from all that if the world manages to tame the virus and the next Sri Lankan election comes around we will have another chance to select whom we want.

So much for the choices we make, will we ever learn we are choice-less?