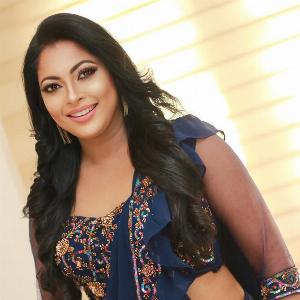 To become an acclaimed actress, there HIMALI are many personality characteristics are needed like charisma the most surface qualities expected. Obviously the next trait is passion, hard work and commitment ,intelligence able to be articulate and well spoken, should be highly imaginative the biggest and important traits that make a great actress.Similar to a tree which had grown profusely, Himali too has had proper foundation in school and thereafter to be in this elated position .Himali Sayurangi born to parents is the second in the family having an elder brother and a younger brother. Father worked at the Insurance Corporation , mother is a housewife has absolutely no hereditary affiliations to the fields she is involved, competent solely owing to her immense innate talent which she possessed in abundant proportions. She had completed education from Anula Vidyalaya. Nugegoda. Sayurangi is married to Asanga Jayalath, the wedding was celebrated on 1 March 2012 at Cinnamon Lakeside Hotel in Colombo.[]The couple has one daughter, Vanuji Senalya who was born in 2013 she is now just nine years old. Asanga is the owner of an advertising agency called ‘Adland’ Advertising. Himali had first met Asanga during a radio play where the bond had developed to become a strong bond during the shooting of ‘Amaa’ teledrama.

She had been admitted to ‘Lama Pitiya’ in Sri Lanka Broadcasting Corporation when very young in age by her father, had become a child radio presenter having innate talent in this arena before entering to acting. On maturing she worked as a television presenter in Sri Lanka Rupavahini Corporations where she excelled to unprecedented tall heights .Himali even presented many programs like awards ceremonies in many television channels in Sri Lanka Rupavahini Corporation hosting successfully the programs Pehebara Ahasa, Nadun Uyana and Nuga Sevana for four years.Himali also presented Ridee Reyak with authority winning the hearts of all participants and all audiences.
Her maiden acting in Tele dramas came through the television serial ‘Vaadiya’ directed by Herbert Ranjith Peiris at the age of just eleven years.. She got this opportunity with the help of fellow actress colleague Surangi Ruwanmali. Her first mega teledrama acting came through ‘Adaraneeya Poornima.’ In year 2016, she joined the mega teledrama of TV Derana ‘Deveni Inima’ which is one of the longest and viewed tele dramas to date. The serial gained enormous popularity and won several awards at local television festivals. Himali portrayed as the mother “Udeni” of “Anuhas”, a courageous woman abandoned by his lover “Ravi” during her pregnancy, this she portrayed to precision.

Her maiden cinematic experience came through a minor role in 2009 film ‘Ekamath Eka Rateka’, directed by legendary Sanath Gunatilleke. However, her first screened film was in year 2007 the blockbuster ‘Sikuru Hathe’ daughter of main character in the film Wijaya Nandasiri. She won the Sarasaviya award for the best upcoming actress for her role “Samanmali” in this film. Prior to that, she won the ‘Raigam’ merit award for the television serial ‘Isuru Giri Tharanaya.’ For about ten years, she portrayed the girl friend’s character in many television serials which she portrayed meticulously.

Himali Sayurangi is an A-grade artist in Radio too, where she rendered her voice as a dubbing artiste for many radio commercials and radio plays. She was first involved in the stage play ‘Mayadevi’ of KB. Herath. After that she joined the stage play ‘Daskon’ which was unfortunately only shown in Australia. She only acted in these two stage plays perhaps owing to the time , one as to train and rehearse for a stage play consumes a lot of time. After more than six years, Himali made the cinema appearance in the catastrophic film ‘Tsunami’ directed by famous Somaratne Dissanayake. She portrayed the role “Sriyani”, as a mother who lost the child from 2004 Tsunami. In year 2019, she joined the radio play ‘Adara Wedilla’ produced by Sirasa FM which too was a milestone in her career.

In the year 2016 Himali was adjudicated as the winner of the Rupavahini state award for her role in Kaviya Nubai” directed by Anuruddha Jayasinghe to the script of the novel written by Shanthi Dissnayake. This role had been very hectic Himali laments as she had to remain with her make ups from early morning to late nights. Only consolation had been the director had restricted to only three frames for a day.She had to sport a denture and the whole body was painted black which was further seen when she did a bath in the nights the whole bathroom floor was covered in black colour.The role she had to portray the role of “Pokutti” who had endeavored to abort her child, as a result the child had been born deformed. Imani had summarized her role as a ‘hectic’ role portrayed with a lot of effort 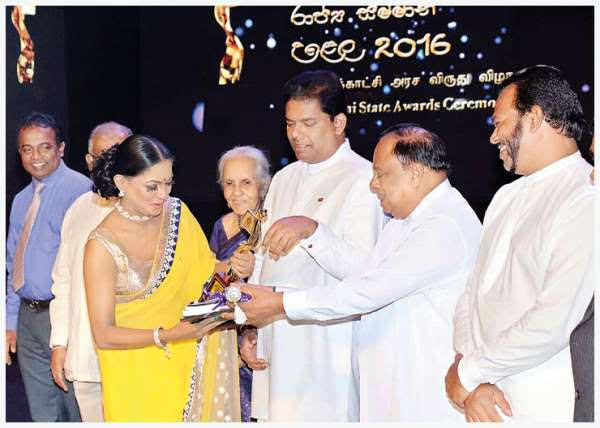 She also contested in the reality show ‘Mega Star’ under the team “Sooryans” led by Yureni Noshika In year 2021, he appeared in the musical Mega Drama ‘Divi Thura’ to date has completed three hundred episodes. In the same year 2021, she won the Best Actress award at the ‘Borden International Film Festival’ in Sweden for the television serial ‘Govi Thaththa’ by Dharshana Ruwan Dissanayake.

During the career in acting Himali Sayurangi had many awards, meri awards such as Signis, Raigam. Sumathi ,Sarasaviya of course the one for Rupavahini State Award in year 2016 stands out above the rest.

All her fans would Himali Sayurangi would wish her the best for all her future creations with good health for her to portray many other roles she would like to .