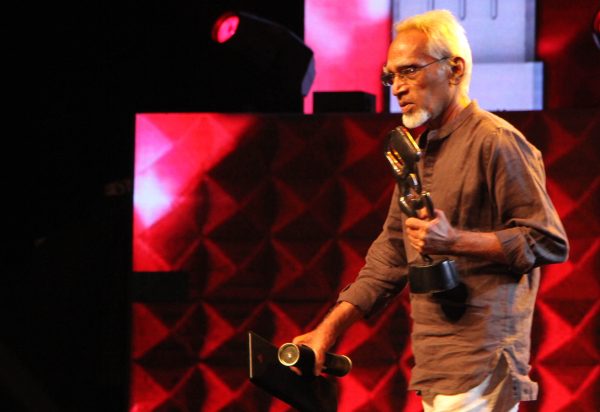 Hemasiri Dhanawatha Liyanage born December 25, 1942,, is an actor in Cinema, theater, and television. He is well known for the dramatic roles in Thattu Gewal[2]and Thaththa teledramas and films Sankranthi, Sthuthi Nawatha Enna and Madhura Charika.

Hemasiri  was born on 25 December 1942 in Nahalla village, Bulathsinhala as the third of the family with four siblings. He has one elder brother, one elder sister and one younger brother. He completed education from Vidyarathana College, Horana. He is married to Kusuma Liyanage, who is a cousin sister who is also a retired teacher.

Hemasiri was a bright student in school was selected to the University of kelaniya in year 1964 from where he graduated with an arts degree. He formed the drama organization in the university known as National Drama Corporation. After graduating, he started teaching at Vidyarathana College, Horana. In  year1980, he lost his job due to political disputes within the country. He taught economics to A/L students and taught drama as an additional subject. While in the school, he produced the stage drama Nadagam Hewath Sudu Atha Awata Passe in  year 1969. The drama won the second place in Inter-school drama competition  a bit controversialy. In year 1975, Hemasiri produced the play Nariya Saha Keju and in year 1975 with Wijaya Nandasiri and Hemasiri were presented with awards for Best Production and Best Music at the National Drama Festival. His last stage drama production was Chithrage Prema Kathwa staged in 1982. Better known not only as an actor but also as a drama Guru Deva, Hemasiri Liyanage has rendered a greater service for our film industry and theatre art. For his contribution towards producing many artistes for both small screen and silver screen, he has earned the eulogy, Guru Deva.Dharmasiri Bandaranayake, Janak Premalal, Lal Kularatne, Hemapala Pathirage, Sarath Kulanga, Tharanga Rukmal will bear ample testimony for his dedication as a teacher.The teleplay ‘Asalwesiyo’ in which he played the role of a lawyer will remind us of these lines,” Oh yes, I know the law, I know the law.” It would be correct to say that Asalwesiyo brought families with neighbours joining for a new television practice. Hemasiri in school was the economics teacher in addition taught drama too.amour Dharmasiri Bandaranayake is one who had divulged this when he became an actor.Hemasiri is a strong believer of Legend Stanislavski’s philosophy that portrays of each actor should be different not imitating.

As a playwright and producer his maiden stage play was ‘Kanakok Suda’ when still a novice in year 1967 as a twenty-five-year-old where his talent was exposed. While Hemasiri’s first cinematic appearance via the film “Niliyakata Pem Kelemi” in year 1983.In year 1969 he directed a stage play titled: Nadagam Hewath Sudu Awata Passe which was adjudicated to second place in the inter school competition.Hemasiri’s final stage play was in year 1992’Chitrage Prema Kathawa”.

Though Hemasiri Liyanage had won many awards as quoted above his performances and portrayals in Tele Dramas and films unfortunately not much rewarded though had been nominated. In the Raigam Tele’s in year 2018 was awarded a special tribute award for his contribution made to cinema which undoubtedly was mammoth in proportions. .All his fans would thank him for all his contributions made in the past four to five decades would wish him good health and longevity .