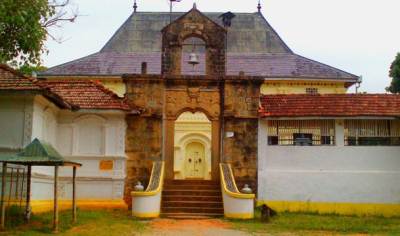 Situated off the beaten track and rarely visited by local as well as foreign tourists, charm, beauty and solitude pervade Hanguranketha, the spectacular tiny hamlet in the Central Highlands.

According to scholars, Hanguranketha is derived from “Sangaruwan ketha” (meaning thriving paddy fields in Sinhala).

Steeped in history and legend and situated approximately 29 kilometers southeast of Kandy City, kings had used Hanguranketha during the Kandyan Kngdom as a refuge when the hill capital (Kandy) was attacked by invading foreign troops. According to legends, King Senarath (1604 – 1635) had constructed the first Royal Palace in Hanguranketha. According to *Robert Knox’s records, the Palace had been surrounded by a white washed giant wall during the Kandyan Kingdom and the entrance of the Palace had intricately carved doors and door panels.

An inscription by Queen Leelawathi of *Polonnaruwa Era had been found in the Royal Palace some years ago. This palace had provided shelter to Konappu Bandara before he ascended the throne as King Wimaladharmadsuriya I (1592 – 1604). *King Weera Parakrama Narendrasinha (1707 -1739 AD) had also stayed a long period in Hanguranketha and had been popular among villagers as “King of Hanguranketha”. 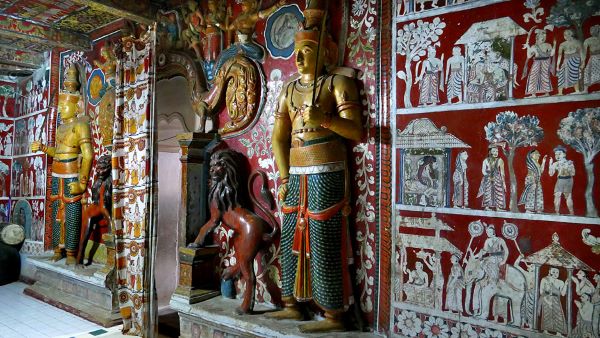 The Royal Palace had been destroyed during the *1818 Rebellion. The majority of the ruins of the Palace are sheltered in the Kandy Museum. But there are some moonstones, stone doorways and stone pillars at the site. According to a stone inscription, the present Pothgul Viharaya (the Scriptures Monastery) is built in these premises. There many valuable old manuscripts regarding Kandyan history housed in this temple which will be of immense benefit to future researchers. 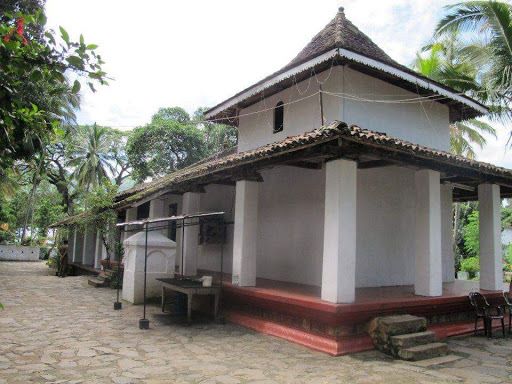 At present, there are two ancient buildings in Hanguranketha, the Pothgul Maliga Maha Viharaya (Buddhist Temple with a library) with art and architecture of *Kandyan Era as well as an ancient devale (Hindu Temple). The Temple had been named “Pothgul Viharaya” due to the *ola leaf manuscripts displayed in the Library. There is an ambalama (wayside rest utilized by travelers in the past) in close proximity to the devale. The open-air structure of the ambalama dates to Kandyan era. There are stone pillars with an inner and outer chamber including a clay tile roof in the ambalama. A pinthaliya (a vessel with drinking water) is placed near the ambalama.

The Temple had been built during the latter part of the Kandyan Kingdom under the guise of constructing a church. The two-storey structure beyond the *makara thorana bears distinct European architecture with its façade embellished with elegant figurines and murals. The wide arches resemble the interior of a church building. The Image House of the Temple is constructed behind the two-storey building to avoid detection from onlookers. It comprises four separate chambers and the walls of these chambers feature art dating to Kandyan era. Among the paintings in the Temple, there are depictions of the previous incarnations of the Buddha, the manner in which he had received Niyatha Vivarana (receipt of permission) from the previous Buddha. There are also intricate paintings that depict the arrival of *Prince Vijaya and the battle between *King Dutugemunu and *King Elara. 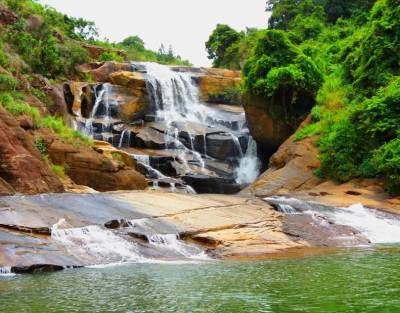 A canon is placed inconspicuously near the granite makara thorana. British troops had used this canon during their attacks to this site.