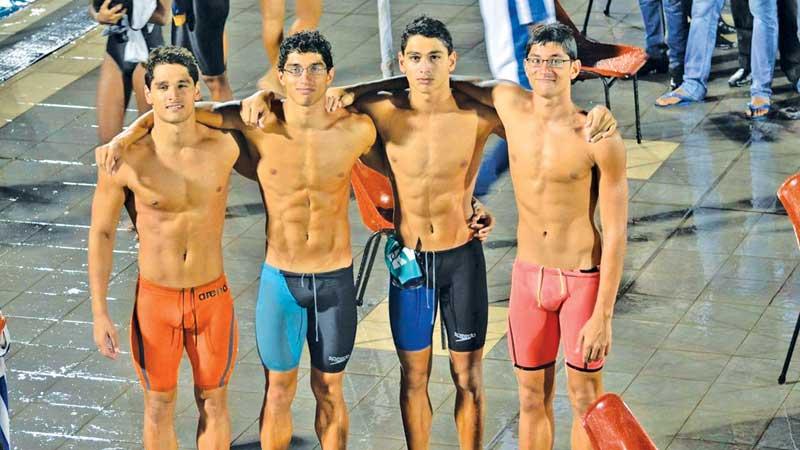 ‘I have been representing Sri Lanka for the past 11 years and every time I have done it, I have felt so honoured to be in a position where I am able to represent Sri Lanka. Being able to do this at the highest level of competition my sport has to offer, the Olympic Games, is an added honour’

Sri Lanka’s most decorated swimmer Matthew Abeysinghe is primed to give his best shot at the Tokyo Olympics despite kicking his heels in frustration after pools were shut down in the United States where he trained because of the pandemic.

“I feel very confident leading up to the Olympics. My target in Tokyo would just be to have the best time. If I do that and swim the race the way I want to swim, I should be in contention for at least a semi-final swim,” said Abeysinghe who was born in Pennsylvania and competing in the 100-metre freestyle event.

“I was very young at the Rio Olympics and it was a great learning experience for this Olympics. I’m excited to use the knowledge I gained five years ago to better prepare me for the task ahead which is Tokyo 2021,” said 25-year-old Abeysinghe who holds multiple Sri Lanka swimming records.

The first swimmer in Sri Lanka’s history to qualify for the Olympics, his time of 49.11 seconds at the 2018 Gold Coast Commonwealth Games was well within the 2020 Tokyo Olympic qualifying standard but had to depend on an invitation place because the Games was postponed by a year. “If the Olympics had been held in 2020 that 49.11 would have been a time that he would have been invited to attend, not a wildcard place. But unfortunately his 2021 time was no longer within the qualification period. He has not had many opportunities to compete most of 2019 and all of 2020 and was not able to improve that time,” said his father and coach Manoj Abeysinghe.

“The fact that we are able to participate in an Olympic Games in the middle of a global pandemic is pretty amazing. I know Matthew has had many setbacks in training due to Covid but according to his coaches in the States now and what I have seen of his training video and stuff like that, I am hopeful he may yet have his best Olympics in spite of the pandemic,” said the senior Abeysinghe who will be in Tokyo as his son’s coach.

“Practice times indicate it is a lot better than what I expected because of the pandemic, hopefully he will be able to do a best time,” he added.

Following are excerpts of an interview with the US-based Matthew Abeysinghe who will be flying direct to the Games:

Q: How do you feel going into the Games especially when it was postponed by a year because of the COVID-19 pandemic?

A: I feel great. I feel like my preparation for this Games has been very good and I’m very excited to race. The Olympics being delayed because of Covid obviously came with its own set of problems, but at this point in my  training stage I feel very confident leading up to the Olympics.

Q: What are the challenges you faced especially without any major international competitions? How have your preparations been especially since pools in the US were shut?

A: I have faced many challenges in the past year and a half or so since Covid I was in New York City with my family when the pandemic first hit. NYC was probably the worst hit city/place in the entire world and lockdown was extremely intense. Being under lockdown for such an extended period, coupled with the fact that most pools in the United States were closed made it very hard to find a place to train. However, I do feel confident at this point leading up to the Olympics, I am swimming as fast right now as I ever have or faster. Before the pandemic I had basically swum for 20 years straight with no real break. I do think that the pandemic offered me a much needed physical and mental break from the sport of swimming.

Q: Your national record of 49.11 at the 2018 Commonwealth Games was within the Olympic qualifying standard in the 100m freestyle, what would be your target in Tokyo?

A: My target in Tokyo would just be to do a best time. If I do that and swim the race the way I want to swim it, I should be in contention for at least a semi-final swim.

Q: You are the most decorated Olympic swimmer at the South Asian Games (having won 14 gold medals in Guwahati and Kathmandu), what are your ambitions with the Commonwealth and Asian Games coming up next year?

A: Honestly right now I am just trying to focus on one meet at a time. This close to a competition I like to put my blinders on to anything happening outside and just have tunnel vision on the goal ahead. This is one of the things that has given me the ability to remain focused on a sport I have done for 21 years.

Q: Who are your role models in the sport (if any) or what motivates you to keep pushing when you compete in the pool?

A: At this point in my swimming career, I wouldn’t say that I look up to anybody in the world because they are my swimming competition. I don’t believe you can truly compete with someone that you look up to. However, if I had to pick a role model outside of swimming it would be my dad and my brothers. They are the ones who I can always lean on if I need anything and the ones I go to when I need any type of advice. They always have my best interest at heart, even if sometimes I don’t like what they say.

Q: What are your memories of the 2016 Rio Olympics? What is the most unforgettable moment in your career so far?

A: I was very young at the Rio Olympics and it was a great learning experience for this Olympics. I’m excited to use the knowledge I gained five years ago to better prepare me for the task ahead which is Tokyo 2021. As for my most unforgettable swimming experience, as I said before this sport has given me so much over the past 21 years, it is extremely hard to pick just one most unforgettable memory. A few that come to mind are obviously both South Asian Games in 2016 and 2019, qualifying for the Olympics in 2016, and swimming on a relay comprised of my brothers (Andrew, Dillon and Kyle) which broke the Sri Lankan National record in the 4x50m medley relay, a record which I believe still stands to this day.

Q: Any regrets at failing to achieve something in life?

A: I don’t really have regrets to be honest. Everything I’ve done up to this point, I’ve done to the best of my ability. Especially in the pool. If I’ve failed at anything, I don’t consider it a failure because I know I always did everything I could to be ready to perform.

Q: You are poised to become a two-time Olympian, does the pressure to perform for the country weigh heavily on your shoulders?

A: It does weigh heavily on my shoulders but not in a negative way at all. I have been representing Sri Lanka for the past 11 years and every time I have done it, I have felt so honoured to be in a position where I am able to represent Sri Lanka. Being able to do this at the highest level of competition my sport has to offer, the Olympic Games, is an added honour.

Q: You are a hero to Sri Lankans, what is the message you would give youngsters who dream of becoming Olympians?

A: My message would just be to work hard. I think that’s obviously the most important thing. I think if you work hard enough and prepare well enough you can overcome any obstacle. I really do believe that.