GOING INTO BAT FOR NEIL HARVEY 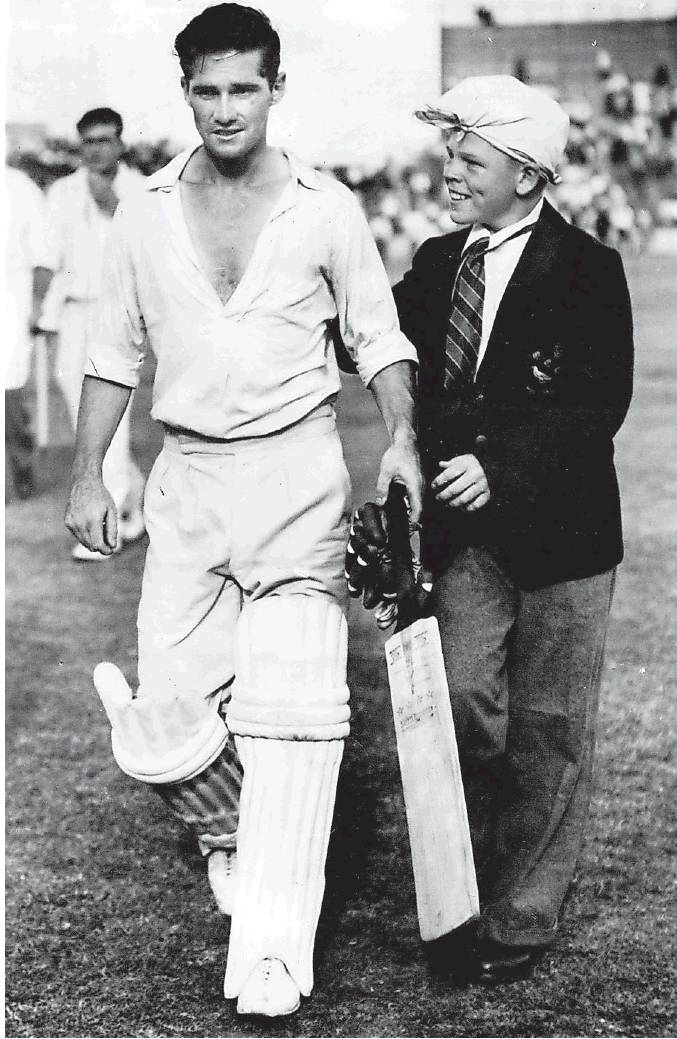 It was in 1948 on his last Ashes tour of England that Donald Bradman, at the tail of an extraordinary career, led a team of cricketers that today are regarded as one of the greatest cricket sides of all time.

Over 144 days, the Australians, including titans of the day such as Keith Miller, Ray Lindwall, Sid Barnes and Arthur Morris, went undefeated in all of their 34 matches – earning the sobriquet The Invincibles.

Among them was 19-year-old Ashes debutant Neil Harvey.

The heir apparent to Bradman, a few months earlier, had become the youngest Australian to score a century, in just his second Test match.

Today, at 92 not out, Harvey is the last man standing from that historic tour and the second oldest living Australian Test player.

It’s a number that is decades advanced from the glory days of his career and seems far too late in life to represent the point where a definitive biography should appear. And yet that is what former cricketer and journalist Ashley Mallett has written.

His evocatively titled book, The Last Invincible, has connotations of Valhalla to it and there is no shortage of cricketing gods referenced within its pages.

It cannily taps into the aura of a near perfect team and of Bradman – that sporting freak, described on his retirement by writer R.C. Robertson-Glasgow quite accurately as a ‘‘flawless engine’’.

The Don’s legend has been so great as to even defy the disinterest of today’s young cricketers in jerky black-and-white reels reproduced on YouTube and Pinterest pages of once dun-coloured newspaper pages, brightened with phone filters.

Harvey’s has been more muted, even though by the time of his retirement in 1963 only Bradman had scored more runs and made more Test centuries.

But in the era of the Big Bash League, Steve Smith (with his extraordinary 61 average) and the not so distant wake of Ricky Ponting, many who saw Harvey play (averaging just under 50, with 21 tons) still think of him as Australia’s best batsman after Sir Donald – and Mallett is one of them.

‘‘He was so neat and compact and so unflurried getting down the track to the spinners, it was quite amazing,’’ he says.

‘‘I would have loved to have bowled to him, but I would have got belted around. Harvey was probably the best fieldsman Australia’s produced too; he could throw down the stumps diving in mid-air with only one stump visible, and he did that regularly.’’

Not so much about that stardust-tinged tour or its elite membership, The Last Invincible is more a tap on the shoulder to later fans about a boy wonder who was the real deal, while others came and went.

‘‘I think I set out to write Harvey’s story and everything else, but also to reassert his place in Australian cricketing history,’’ Mallett says, his voice crackling down the line from his Adelaide home. ‘‘I think he’s been largely forgotten.’’

Before qualifying the remark: ‘‘Harvey isn’t the only one. Ray Lindwall and Alan Davidson also fall into that category.

‘‘He’s had all the accolades, he’s got in the Hall of Fame and has a statue outside the MCG, but I wanted to bring it to the modern reader to say that here’s a bloke who’s as good as anyone since Bradman.’’

Mallett, himself a former Test spin bowler with 132 scalps, is not unfamiliar with holding his own in a red hot team full of legends, suiting up throughout the 1970s alongside the Chappell brothers, Jeff Thomson, Rod Marsh and Dennis Lillee.

But in Harvey’s adeptness against spin, Mallett sees a possible antidote to the lack of nuance in how batsmen today play the spinners.

‘‘There’s no getting down the wicket and pushing for twos,’’ Mallett says. ‘‘You wait ’til you get a bad ball and whack it for four. It’s either block or slog. Whether that comes from the T20 I don’t know, but it’s a crazy way of playing the spinners and it seems to be the modern way. That’s when I started to think this is a book I could do and bring in Harvey, the way he played.’’

The book delves not just into the history of Harvey but also the nostalgia of boyhood, when Mallett first was bitten by the cricketing bug.

Among the match reports, Mallett knits together memories of his grandfather taking him to the SCG when he was nine to see the ‘‘veritable gods of Olympus’’ warming up in the nets ahead of the second Ashes Test against England in Sydney in 1954: Harvey batting, Frank ‘‘Typhoon’’ Tyson sending down thunderbolts alongside him, Bradman leaning on the nets, whispering instructions.

‘‘It was heaven on Earth in a way,’’ says Mallett. ‘‘My grandfather was a great advocate of cricket and was able to talk to me about it; he knew the game.

‘‘He loved watching [Victor] Trumper play when he was a young bloke and then later on watching Bradman. He reckoned Harvey was a bit like a left-handed Trumper because he had all the grace and the movements, tremendous footwork and unhurried. It really struck him that he had plenty of time – time to play the quickest of bowlers.’’

Mallett has approached his task with forensic zeal and there’s a depth of detail in the book, from anecdotes about some of history’s greatest games to obscure details about Harvey’s administrative role in his first wife’s Tupperware business.

The book also examines the sporting politics that shaped the Australian team and determined the legacies of those who played for their country.

‘‘Harvey had his own opinion, all his life,’’ says Mallett. ‘‘He’s always aired his opinion. And he hasn’t held back. He doesn’t hold back at all.’’

As a selector, after his retirement, his frank assessments of the Australian team would sometimes put him at odds with players, and as a player himself Harvey’s tendency to speak his mind didn’t endear him to the cricket establishment. It arguably cost him the captaincy in 1957, when he was passed over for Ian Craig, then but a six-Test veteran and aged just 22.

‘‘I think he’s been misunderstood totally by the modern cricketers,’’ says Mallett. ‘‘If he went along and had a chat to them in the dressing room they’d love the bloke and embrace him straight away.

‘‘He talks passionately about the game and about the players, and he reveres some of the modern players, talking about Warnie as ‘the best I’ve seen’. He gives credit where it’s due. There’s none of this sort of, ‘Oh, we were far better in the old days.’ ’’

Only at the tail of his career did Harvey captain Australia, stepping in for the injured Richie Benaud (who had ‘‘torn the subscapularis right down to the capsule that contains the shoulder’’) in the 1961 Lord’s Test.

Not afraid to paint grand scenarios, Mallett’s reconstruction of this match sounds more like a trudge up Pork Chop Hill under heavy fire. It was marked by a protuberance in the batting surface from the top of an old drain under the pitch, which the players dubbed ‘‘the Ridge’’. It was a fast bowler’s delight, which Harvey relates made the ball ‘‘fly off at strange angles and odd heights’’.

The conditions were tough for both sides, but Australia won the Test easily after Harvey decided to have 19-year-old debutante Graham McKenzie ‘‘attack the Ridge’’ – scuttling five of the English bats for just 37.

Perhaps part of the problem with Harvey’s fading legacy has been his self-effacing nature, and Mallett notes that getting his story wasn’t easy.

In fact, the only other significant book about the cricketer is Harvey’s own, My World of Cricket, published in 1963, which is full of cricket anecdotes but reveals surprisingly little about the author himself.

‘‘It’s very hard to get him to talk about himself,’’ Mallett says.

‘‘He knew how good he was, but he doesn’t go around spouting about it.’’W