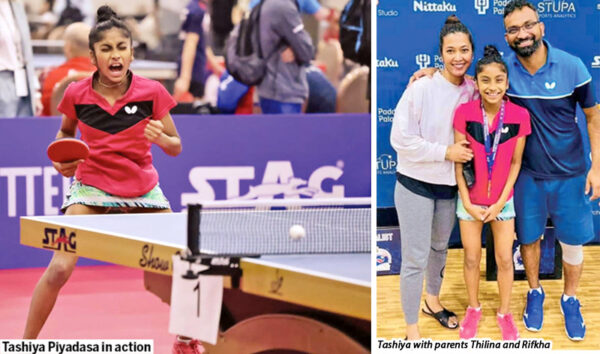 Tashiya Piyadasa, daughter of former Sri Lanka national table tennis champion Thilina Piyadasa, stole the limelight by winning the Girls’ Under-11 Singles title at the US National Championships held in Las Vegas recently. “Winning the national title at any age category is a great achievement and

this is her beginning,” said Piyasada, who is currently based in the US with his family.

Tashiya is the eldest daughter of Thilina Piyadasa, the eight-time national champion and Rifkha Kameel, who is also a former national champion having led the Sri Lanka Women’s Team at the South Asian Table Tennis Championships in 1997.

“Actually, both my daughters had followed our training as well as our matches from their early ages but we never pushed them to come to this sport. They are very keen to play with us from the beginning of their career.”

“I had an idea of getting involved with the game as a coach but due to a knee injury I am out of touch with this game and anyway I am happy to see my two daughters’ talents,” Piyadasa revealed.

“Both my daughters are currently training at the California TT Club in Rosemead, which is owned by the former Chinese Olympic Silver Medallist Gao Jun,” he stressed.

“Before the US nationals, there was the US Team Trials held at the Westchester Table Tennis Centre and my eldest Tashiya was number one in the Under-11 age category and number four in the Under-13 age group.”

“The success behind my table tennis career was high determination and great dedication to the sport from the start and I think my daughters also have the same kind of attitude to the sport.”