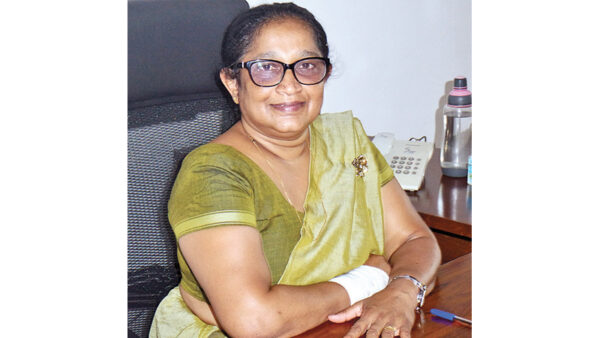 Sashikala Samitanganie Senadheera , former outstanding sportswoman of Mahamaya Kandy has been appointed as the new Principal of her Alma Mater,Mahamaya Girls College,Kandy for her achievements in Education as well as sports. The School is one of the leading Buddhist Schools in the Country and she is the 10th Principal appointed so far and the School is serving the Nation for the last 85 years.

Sashikala was admitted to the Grade Six class of the School in the late sixties and earlier she was studying at Pathadumbara Maha Vidyalaya, Walala and started Athletics at Mahamaya in the Under 13 and 15 age groups. She won the Track events such as 100 metres and 200 metres races representing Maya House and at that time the Prefect of Games of the School was Manel Weerasinghe and according to her instructions she changed her participation in Athletics to Field events.

Immediately she met with success in Javelin Throw, Discus Throw and putting the weight for a number of years in School as well as in Divisional and Provincial levels. Her contemporaries in the Athletic Team of the School were Priyanga Herath, Neranjika Dissanayake two outstanding Athletes in the mid eighties.

Along with Athletics, Sashikala started playing Hockey with distinction under the coaching of Malcolm Perera,an outstanding Hockey Coach and she played as Centre Half from 1984 to 1988 along with Niluka Wijekoon and Amitha Abeysinghe.

Her team mates were Nirosha Weeraratne, Niluka Wijekoon, Nadi Wijekoon, Amitha Abeyratne and Jeewani Rambodagalle to name a few. After leaving School she entered the University of Kelaniya in 1991 and continued playing Hockey and won colours for Hockey.

She passed out obtaining BSc Honours with second class Upper Division and she was selected to the English Training School at Penideniya and served at Schools like Baddegama Kanishta Vidyalaya, Rajawella Central and Teldeniya Muslim School to name a few as a trained English teacher. She got through the S. L. E. A. S. examination in 2007 and served as Asst. Director of the Zonal Office, Wattegama before becoming the Principal of Government Science College,Matale.

She received the Post Graduate Diploma from the Peradeniya Campus in the year 2002 and received the Masters Degree from the same Campus in 2012. She was awarded the ‘Best Director of Science” by the National Institute of Fundamental Studies in 2016. Sashikala was the Second Old girl of the School to become the Principal after Lalitha Fernando who was the Principal from 1972 to 1980 .