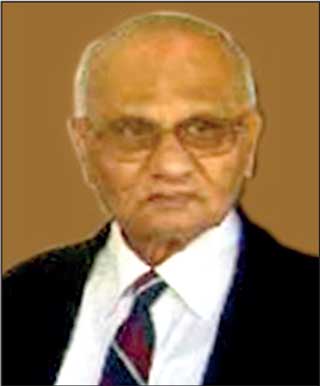 Former Richmond College, Galle and Saracens SC cricket captain Arnold Adihetty has died at the age of 91 in a hospital in Middlesex on Sunday following a bad chest infection.

A hard-hitting batsman, useful medium-paced seam bowler and an excellent fielder, Adihetty captained Richmond College in 1949 and 1950 and was the first to captain Saracens SC in the Sara Trophy division I tournament in 1957. He also led Saracens in the Daily News Trophy tournament.

Adihetty was a versatile sportsman at Richmond College excelling at cricket, football and athletics. Thalaath Ismail, a cricketing stalwart of Saracens SC and Patron of the club, who played in the Daily News Trophy and Sara Trophy tournaments under Adihetty’s captaincy, said: “Arnold was a very amenable person and got on very well with his teammates. He led a very young Saracens side with the average age of the players being 25 years. It was during Arnold’s captaincy that I put on a record 263-run partnership for the second wicket with James Perera against University at the Colombo University grounds in a Sara Trophy match.

“Arnold left Sri Lanka in the early 1960’s for England in search of better pastures. However, he did not lose touch with his first love of cricket, and he played and coached for a number of English clubs until the ripe old age of 85. Despite having severe leg problems, he would be seen at the nets every evening training the youngsters or playing cricket.”

The members of the Richmond 60 Club published a special souvenir to celebrate his 89th birthday which covers his multi-talented skills and why he remains a legendary player in their hearts.