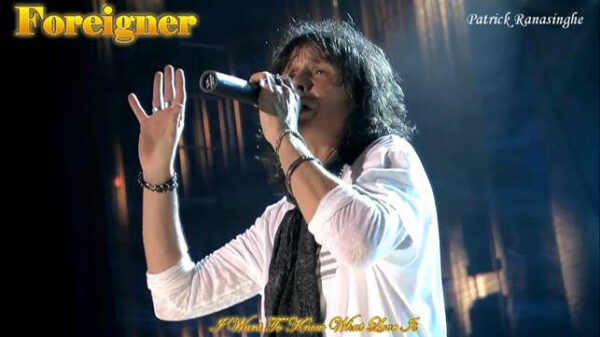 Foreigner 1995 Line up new front man vocalist  Kelly Hansen. After the end of the Mr. Moonlight touring cycle, Gilman left Foreigner and Gimbel returned in his place. Around the same time, in January 1995, Schulman was replaced by Ron Wikso on drums. The group continued touring, but did not release any new material before Brian Tichy replaced Wikso in April 1998 Schulman returned for a second stint in 2000, before Denny Carmassi took over in time for the group’s 25th anniversary tour in 2002. After the tour ended in early 2003, Gramm and Turgon left Foreigner, and the band was put on hiatus for over a year. Jones, now the sole remaining original member of the group, reformed Foreigner for a one-off charity show in July 2004 with a line-up including Gimbel and Jacobs, plus vocalist Chas West, bassist Jeff Pilson and drummer Jason Bonham. Early the following year, the group reformed on a permanent basis, adding new frontman Kelly Hansen in place of West. The group’s line-up remained stable until December 2007, when long-time member Jacobs left.

Jacobs was replaced for Foreigner’s final shows of 2007 by Paul Mirkovich, who later made way for Michael Bluestein in early 2008. Bonham also left in August 2008, to be replaced briefly by Bryan Head and later by the returning Tichy. Foreigner released its first studio album in 15 years, Can’t Slow Down, in 2009. After the subsequent touring cycle, Jason Sutter took over from Tichy in May 2010, although within a year he had been replaced by Schulman. During a tour in 2011, Jones was unable to perform a number of shows due to undisclosed reasons; he was replaced by Joel Hoekstra and later Bruce Watson for select dates, the latter of whom remained a full-time member of the group.] Schulman left again in August 2012, with Tichy filling in before Chris Frazier’s arrival the next month.

In recent years, Foreigner has reunited on several occasions with numerous past members. In July 2017, Lou Gramm, Al Greenwood and Ian McDonald performed a three-song encore with the current lineup of the group. In October, the same three alumni returned to perform five songs and join the current line-up for an encore of two more, in addition to Rick Wills and Dennis Elliott. Late the following year, the reunions expanded into a series of four special shows featuring all aforementioned past members, dubbed “Double Vision: Then and Now”.