Foreign coaches have failed to deliver the goods–by Althaf Nawaz 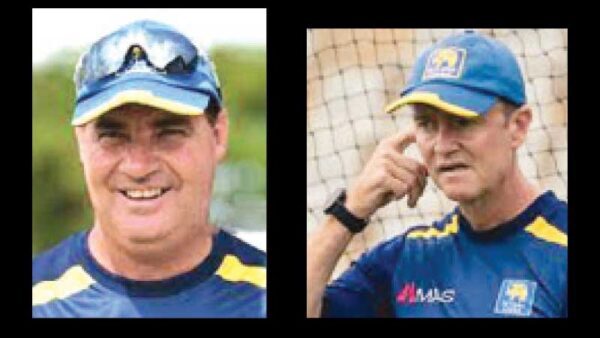 A serious question has arisen among the Sri Lankan cricket loving public and the sport’s stakeholders on whether it is of any worth employing foreign coaches for our cricketers.

They question the contribution to our cricket so far by coaches such as Mickey Arthur and Grant Flower, who have been paid exorbitant salaries and provided with all the luxuries, during their tenure, as Sri Lanka’s cricket seems to have gone from bad to worse.

That’s not all. The contribution by the so called high performance unit of Sri Lanka Cricket is also being questioned. There several personnel inclusive of former cricketers are recruited to handle this segment which plays a pivotal role. But the present performance of the team has raised doubts whether they are really in to their stipulated task. Since last year’s South African tour the Lankan National team has made a habit of losing rather than winning as they have lost every series and one does wonder what has really gone wrong with them.

It seems that the national team’s hopes of qualifying for the T20 World Cup is a distant dream at the rate they have been losing in this format. Is it then wise to change the captain at this juncture where Kusal Janith Perera has continued to fail to live up to expectations? What should the country’s governing body, Sri Lanka Cricket, do to rectify this situation and ensure that they produce a team that would play the game like true professionals and not like kindergarten kids.

The whole problem lies in our cricketers, who once made the national team believe they are stars and ignore their coaches while those in the governing body don’t seem to care. After all’s said and done can the present crop of national cricketers make demands for higher pay? Are they not ashamed to do so considering their rather paltry contribution to the team and the nation? What needs to be grilled into our cricketers is a sense of discipline and patriotism.

They must be made to understand that they are playing for the country and are being paid for that and like any organization, increments come with performance.

The present crop have proven to be an undisciplined lot and it is time the authorities took steps to bring them in line. As a proud Nation after winning the 1996 ODI World Cup, should they look to winning trophies or building formidable sides for future?

After 1996 our cricket was cruising on par with other big timers such as Australia, England, India, Pakistan and the West Indies and maintained the momentum to be within the top five in both short formats, ODI and T 20, winning the 2014 T20 World Cup beating India in the final by 6 wickets, finishing runners up to Pakistan in 2009 and the West Indies in 2012.

Since 2014 it has been a blank sheet as Sri Lanka cricket has witnessed a massive slide into darkness and there seems no light at the end of the tunnel. It is time changes are made and the cricket loving public are told by the Board what steps they intend to take to rectify the shortcomings.