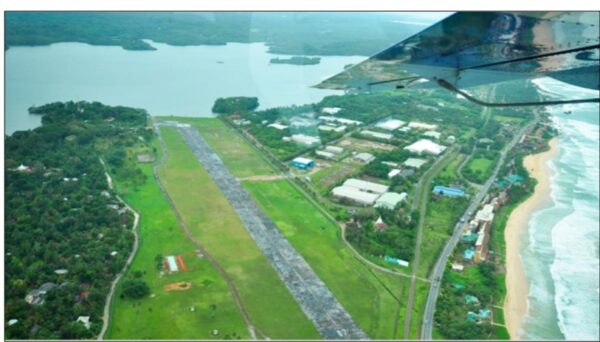 “One more wild goose chase,” that‟s what Dil, my boss said when she reluctantly agreed to accompany me to the southern fringe of Sri Lanka, in search of Justin and his memories of aero planes that flew to break records. It was time in the forties, the story happened so many years ago. The meat of the matter lay in Koggala, the little hamlet nestled between the palm fringed sea and the bucolic Koggala Lake two hours‟ drive from Colombo. That‟s where I headed this time to chase wild geese.

We stayed a night in Galle, at The Light House Hotel, service par excellence, pampered and petalled with food fit to feed gods. In the morning we drove south, along the Matara road, looking for the turn off to Ahangama where Katuluwa Walauwa is, that‟s where Justin held fort. Justin‟s family had been the Lords of Katuluwa for centuries, the usual father to son and grandson heritage, the change of role could be traced back to the Portuguese times when the vice royal in Goa gifted this land to Justin‟s ancestors. Well, that‟s another story, I‟ll come back to it some other day.

As for now, it is long forgotten aeroplanes and Koggala Lake and what Justin remembered to tell me to tell the world.
On one side as we drove was the sea, cobalt blue with white form crested waves, rushing and gushing to break on the granite boulders that stood like sentinels. On the other side we passed the Koggala airfield where I had landed Tiger-moth in my fledgling days as a sky tramp. Years before this small airstrip came, the lake had been a hallmark in aviation history. There were Koggala today – the lake, the sea and the Runway grand ancient aviators who took-off and landed from Koggala Lake. Most of them are now dead and buried, and so are their aeroplanes, all scuttled at sea after the war. Only one replica is embalmed in a museum in New Zealand. What is left of the story now are scant reminders, scratches of aviation history that prop up now and then when clowns like me scuttle back down memory lane chasing moonbeams to bring forgotten fairy tales to light.

The boat was a ramshackle relic that had seen better days. It had faithfully served some fishermen in the by gone years and now having suffered its share of the sea‟s battering and bashing had been pastured to strut up and down the mellow lake. The once colorful paint job has
peeled and burnt with time and has now become a faded mix between blue and green. Even the planks showed signs of rot where the wood cracked and grinned from above the waterline. The fifteen hp engine coughed and cried as we crawled our way across the Koggala Lake under the scorching noonday sun. 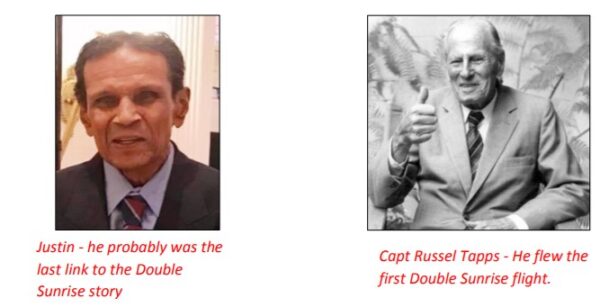 Justin directed the boatman and did finger pointing navigation whilst rattling to us the forgotten sagas of the lake. „That‟s where they made Gam Peraliya,” he announced with glee showing a house where they filmed Lester James‟ immortalized movie. “That‟s Madol Dūwa,” the island lay to windward, green and silent in its pastoral beauty, known well among school children who read Martin Wickremasinghe‟s literary classic. Diagonally opposite Madol Dūwa was the little airfield I mentioned before, located on one corner of the lake, the black serpent like tarred runway dividing the lush green and a national flag fluttering from a tall white mast advertising the Air Force ownership. Far away on the North side was Madin Dūwa, now renamed Bird Island to give a touristic twang to benefit the dollar donors. The Koggala Lake lay in its vast splendor, sleepy and silent, as beautiful as it has ever been.

The boat spluttered to pass a small island of rocks, “This is where the windsock was,” Justin explained. We rounded the rocks and faced the longest stretch of the lake extending beyond two miles. “This is where they started the takeoff run,” said Justin who as a thirteen-year-old kid has seen them all. “We spent our holidays in the Bird Island and watched the aeroplanes take off,” he Justin – he probably was the last link to the Double Sunrise story Capt Russel Tapps – He flew the first Double Sunrise flight. drew from memory and gave his eyewitness testimony. “They raced on the water a long distance and lifted off and climbed away barely skimming the tree-line at the far end,” Justin reminisced.

I stood on the boat and stared. This here then was the water runway of the Koggala Lake. The exact place where some Captain synchronised his gyros, tested controls, pushed his thrust levers and revved his engines to go. I‟ve done the same a thousand times in thousand runways. But that is nothing. This would have been all so different. The sheer romanticism alone was something the pilot in me could barely imagine in my wildest dreams. What are modern heavy jets and neon lighted runways? This here was the “real-deal,” the incomparable beauty of flight transformed into reality by men who dared to buck the odds and perhaps became half birds themselves in the execution of their indomitable task. The water here was where they took off in their cumbersome seaplane on its long journey from Koggala Lake to Swan River Perth on the West Australian coast. 28 hours of non-stop flying on a Catalina Flying boat, flown by Qantas Imperial Airways pilots, the longest leg of Qantas‟ link flight between London and Sydney, in the war-torn years of the forties. The flight was so long that the passengers saw the sun rise twice whilst being strapped to their seats. That is how the name “flight of the double sunrise,” came about and entered Koggala to the record books in the world of aeroplanes.

Justin remembers everything, event and detail of a forgotten saga. “It was war time,” he recalled. “My father was the Mudaliyar, the highest local official for the Koggala area in the British Colonial administration. The orders came from his superiors, all the villagers residing within a radius of five miles from the Koggala Lake were ordered to evacuate their homes and leave within 24 hours,” Justine detailed. 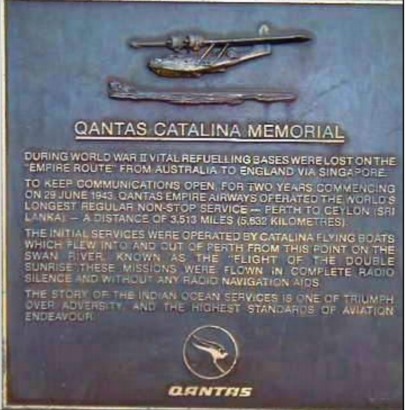 No one could protest, this was “Rule Britannia,” time. Justin‟s father was to see that no one remained in the vicinity of the Koggala Lake. By noon the next day no one remained. The lake went silent; the fishermen packed their measly mote and went away to the unknown. Justin‟s
father was allowed to remain; he was the big boss representing his bigger White bosses. It was just to make sure no one retuned. That‟s when the Royal Air Force came to take over the Koggala Lake, to demarcate the water runway, fix the windsock and prepare it to accept the long flying seaplanes.
—–
It was 1942; the Japanese were occupying the Malayan peninsula. The Qantas Imperial flight, London to Sydney had lost its refueling point of Singapore between Calcutta and Perth. The flight had to be kept, the link maintained at any cost. An alternate route had to be found. Sri
Lanka was the best bet and that too, if possible, the southernmost tip to take maximum advantage to minimize the distance to the Australian coast. Hence, the mapmakers took their protractors and their slide rulers out and made their calculations, Koggala to Perth – long and dangerous, but possible, that‟s when Justin‟s father got his orders to evacuate the fishermen.
….
There were five Qantas aeroplanes that flew this route. They were all named after the stars; Antares, Rigel, Spica, Vega and Altair, magnificent luminaries of the Milky Way. The names were apt as these were the main stars by which the aeroplanes deduced their celestial navigation. That was the only form of directions available as radio silence had to be maintained from Koggala to Perth. Japanese fighters were dominating the skies over the Indian Ocean. The Qantas machines were 16000 kg Catalina Flying boats with two Pratt & Whitney Twin Wasp piston engines of 1200 hp. They cruised at 98 knots per hour and were fitted with extra fuel tanks to last the impossibly long leg. The 5652 km journey lasted an average of 28 hours and when winds were unfavourable it dragged to more than 30 hours, the longest being an astounding 32 hours and 9 minutes. This is the longest non-stop regular passenger flight ever attempted. The first flight came from Perth and landed in Koggala on the 30th of June 1943 under the command of Captain Russell Tapp. The last flight was on 18th July 1945. The aeroplanes carried 3 passengers and 69 kg of mail. 271 crossings were made carrying 648 passengers; each passenger was given a certificate illustrating their membership to “The Rare and Secret Order of the double Sunrise”. In all its two-years of operation, the star named Catalinas flew the Indian Ocean facing every possible aviation hazard. Yet they had the unequaled proud record of ending the enormous episode without a single mishap or accident. In aviation terms it was a phenomenal feat of absolute skill and meticulous preparation performed by pure professionals who obviously knew what they were doing.
—-
Capt. Russel Tapp
Out there to Swan River, that‟s where our wild goose chase next took us. The memories of these unique flights are better kept on the Australian shore. There is a plaque inserted in a granite boulder, placed there by Qantas, on the east bank of the river, in loving memory of their historic flights flown during the war years. People stop by, grandfathers pointing fingers and explaining to grandsons what they knew or heard about the long record-breaking aeroplanes that took off and headed to a little-known lake in an unknown place called Koggala. As to our end, there is no written evidence for the interested to read nor plaques inserted to granite to stand beside and take photographs. The Grandfathers here are dead and the Grandsons may have no interest. Years have rolled and time has reduced the once renowned water airfield from magical to the mundane. Only the fishermen are there, in their dugout canoes baiting their fish and they know nothing of star named aeroplanes that landed and took off on their beloved lake.
But then what are Qantas plaques on granite boulders compared to Justin? The expert sits there at Katuluwa Walauwa, his ancestral home from where his father ruled the hamlet. Here is the verbal evidence, honest and accurate, Justin‟s unvarnished sentiments recited by recall, exactly as it happened. Stories of Bird Island and how he stood and watched the cumbersome Catalinas skim the water in their two-mile run to lift off, clearing the trees by whiskers as they made their way over the ocean to the far away Swan River in Perth. The memories are all there, very much intact, to be described in fine detail. Maybe to answer a question or two, maybe to re-live a moment or a few, about a time when Koggala Lake entered aviation history as part participant of the record-breaking flights of the double sunrise.
Capt. Elmo Jayawardena
Elmojay1@gmail.com