Based on an article by aviation historian and writer Roger Thiedeman in the Sri Lanka Sunday Times of January 30, 2000; plus other material supplied and written by Roger. Passengers, visitors and those who work at Katunayake airport would be accustomed to the sound of jetliners landing and taking off. The shrill, piercing whine or deafening roar of jet engines is today a familiar backdrop to the bustling activity at Colombo’s aerial gateway. But there was a time when Katunayake knew only the more genteel drone of piston engines and the hum of whirling propellers.

That all changed nearly 49 years ago, the day seven jet-powered fighter ’planes came screaming from the sky to touch down at the RAF (Royal Air Force) Negombo airbase (as Katunayake was then known). The five single-engine de Havilland Vampires and two Gloster Meteor twin-jets created history as the first jet ’planes to land in Ceylon.

Belonging to RAF 249 Squadron in Africa’s Gold Coast (now Ghana), the jets were, in fact, based at Deversoir airfield in Egypt’s Suez Canal Zone, some 60 miles from Cairo. They came to Ceylon to participate in an air display in celebration of the nation’s third anniversary of Independence.

Led by Group Captain W.S. Bowling, the seven jets left their home base on Saturday, January 27, 1951. Although breathtakingly fast, the fighters had limited range, so the journey to Ceylon was spread over several days. Overnight stops were made at Habbaniyah (Iraq), Sharjah (then part of the Trucial States), Mauripur (Pakistan) and Pune (India). Finally, the RAF Vampires and Meteors reached their destination, Katunayake, on the afternoon of Wednesday, January 31, 1951 – a date that became a milestone in Sri Lankan aviation history.

There were other reasons why the visit of the RAF jet ’planes was significant. At the time, Ceylon’s own air arm, the Royal Ceylon Air Force (RCyAF), was on the threshold of formal inauguration, scheduled for March 2, 1951.

Indeed, the RCyAF had been launched unofficially a few months earlier under the command of Group Captain G.C. Bladon of the RAF. Already, four De Havilland Canada DHC-1 Chipmunk basic trainers had been purchased as an initial complement of aircraft.

So, the RAF sent their sleek jets to Ceylon not only to display their power and prowess at the Independence anniversary air pageant (which took place at Katunayake on Saturday, February 3). They also came on a flag-waving exercise, to create enthusiasm and interest in the embryonic air force that all Lankans could soon call their own.

And create enthusiasm and interest they did. When the seven jets taxied to a halt on the pierced-steel planking (PSP) that served as Negombo airfield’s tarmac, the pilots were greeted by the Commander-in-Chief of the Far East Air Force, Air Marshal Sir Francis Fogarty. Also in the welcoming party were the Air Officer Commanding (AOC) Ceylon, Air Commodore F.L. Pearce, and the Commanding Officer of RAF Negombo, Group Captain F.G. Worthington.

Among the excited crowd of onlookers were several children of British personnel stationed at Negombo airbase. Soon, with typical curiosity they were peering fearlessly into the intake and exhaust ducts of the now-silent turbojet engines.

But the Ceylon press took first prize for the greatest frenzy of excitement and adulation. The next day, the Ceylon Daily News headlined its story: ‘They Came Here with a Whistling Wail – First Jet Aircraft to Touch Down in Ceylon’.

The Ceylon Observer was no less exuberant. Readers learned how “the (arriving) aircraft sped over Negombo airfield with the wail of a banshee and were soon tiny dots on the horizon during which they did (sic) Colombo. Circling over the city the jets then came over the airfield once again and … peeled off from tight formation-flying and came to earth with the whistling wail thinning out.”

The Observer reporter went on to say that “interviewed shortly afterwards, Group Captain Bowling said the flight had no trouble whatsoever in coming to Ceylon and the squadron were glad of the distinction of being the first jets to land in Ceylon.”

However, the best piece of local reporting of the occasion came from Times of Ceylon staff writer R.L. Michael, who was privileged to be given a ride in one of the two-seater Meteor jets. Extracts from his breathless prose are reproduced below:

“As I scrambled gingerly out of the cockpit of the silver-plumed Gloster Meteor at 4.30 yesterday evening, Squadron Leader Cartridge of the RAF Katunayake grabbed my hand. ‘Congratulations,’ he said, ‘you are the first Ceylonese ever to fly in a jet plane.’ I mumbled a hasty ‘thank you’, but deep in the pit of my stomach a gnawing sensation clutched painfully, and around my forehead my temples throbbed like a tattoo of drums.

“Being hurtled through space at 580 m.p.h. and touching a peak altitude of 10,000 (feet) for the first time in my life, was something more than my physique could take.

“At the end of that 15 frenzied minutes in the cloud world I felt just what an American pilot expressively said of his first jet flight: ‘it was one helluva sensation and wonderful.’ When I climbed into the cockpit at 4.10 pm yesterday … there must have been a block of ice in the pit of my stomach. I was ice-chilled. But the jauntiness fled as a young RAF Sergeant lashed me securely to my seat, with my legs straddled on either side of the control stick, fitted me with a crash helmet, strapped a parachute and oxygen mask and dinned a catalogue of ‘don’ts’ into ears that hardly heard.

“Flight Lieutenant Michael Grey taxied swiftly down the runway and in the quickest twinkling of an eye took off. There was no heaving vibration, no uncanny roar as the Meteor ripped into space with a take-off speed of 150 m.p.h. A nausea of heaviness tugged at my chest and throat as the Meteor banked angularly. I slumped gazing through the canopy. I had the vague feeling that I was on the slope of some steep mountain.

“I glanced at the altimeter. It had jumped to 9,500 feet. I tried to yell into the intercom praying for a quick descent. But with precise efficiency, Flt. Lt. Grey cleaved through the clouds at 530 m.p.h. The feeling of futility fathered a desperate desire to wrench the mask off my face, to shout, to do anything to attract the sphinx at the controls.

“We circled over Colombo Harbour, saw the neatly lined-up ocean liners, like toy tugs, raced over the brick and mortar of the city where buses and cars appeared like so many ants crawling about. Suddenly without warning, the Meteor leapt into its world – the cloud world – 10,000 feet above the earth. Again the nausea and heaviness, a stabbing pain in the eyes, and feeling of futility overcame me. I had been 12 minutes in the skies.

“Once more the Meteor banked at a steeper tilt and through a hazy film that dangled, as it were, before my eyes, I spied Negombo Lagoon … Once more we skirted over a stretch of coconut palms and at 4.30 the Meteor touched down at 110 miles an hour.”

Before long, those pioneering RAF aeroplanes were followed by further jet-powered aircraft, both military and commercial, that began arriving in Ceylon. Notable among them were the de Havilland Comet 1s of British Overseas Airways Corporation (BOAC), the world’s first passenger jetliners, which commenced scheduled services to Colombo from London on August 11, 1952.

But Vampire jets, like the ones that came to Ceylon on January 31, 1951, provided an odd footnote to the story of Sri Lankan military aviation. In 1954, five Vampires were ordered for the RCyAF. Packed in individual crates, three were shipped to Ceylon. But after being unloaded at Colombo harbour, the still-crated jet planes were put back on board ship and returned to the manufacturer. [The remaining two Vampires were never delivered to Colombo following cancellation of the order for all five jets.]

The decision was that of Air Force Chief Bladon, who is believed to have deemed that the Vampire jets were too fast and difficult for Ceylonese pilots to master, and ordered piston-engined, propeller-driven Boulton Paul Balliols as advanced trainers instead.

Not until 1959 did the Royal Ceylon Air Force receive the first of 12 Hunting (Percival) Jet Provost fighter/trainers, bought at the instigation of the then Air Force Commander, Air Vice-Marshal J.L. ‘Bouncing’ Barker

Roger Thiedeman extends sincere thanks to Mr. Odath Weerasinghe for the use of contemporary newspaper reports from his collection on this and the next three pages. 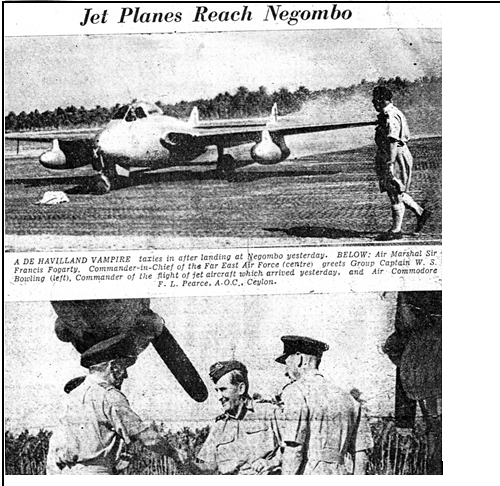 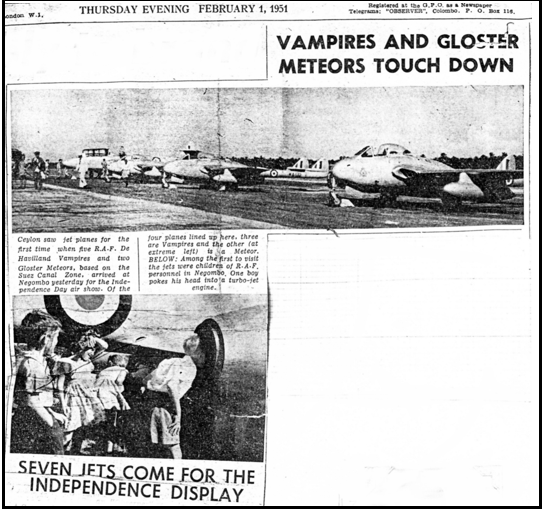 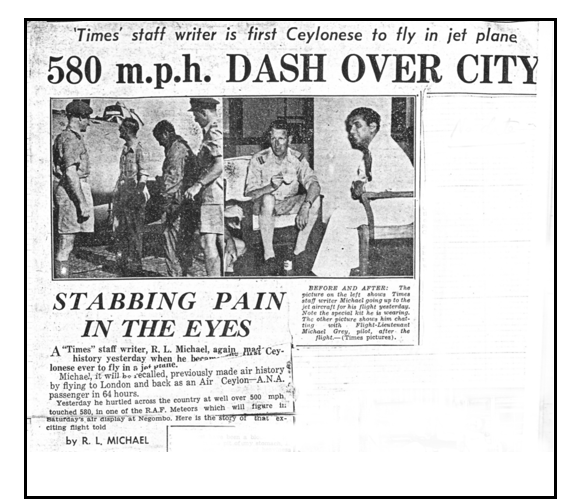 The Gloster Meteor was Britain’s first jet fighter, and the only jet aircraft ‘flown in anger’ by the Allies during World War 2. With the exception of eight prototypes, in which a variety of turbojet engines manufactured by Rover, Halford and Metrovick were used – plus an experimental one-off engine test bed fitted with two Rolls-Royce Trent turboprops in 1945 – the vast majority of the 3,947 Meteors built between 1949 and 1955 were each powered by a pair of Rolls-Royce Derwent centrifugal-flow turbojet engines.

Although the type saw only limited action in WW2, Royal Australian Air Force (RAAF) Meteors fought in the Korean War. Later, others were flown by air arms of such nations as Argentina, Egypt and Israel in regional conflicts. Specialised variants of the Meteor were developed for use in photographic aerial reconnaissance and as night-fighters. 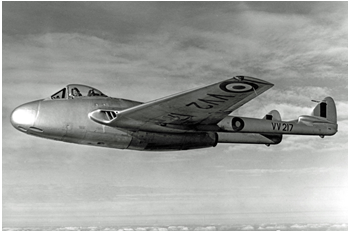 De Havilland Vampire FB.5 fighter-bomber VV217 of the RAF, the same sub-type as the five Vampires that landed in Ceylon in January 1951

Making its service debut in 1946, the de Havilland Vampire was the first single-engine jet aircraft operated by the Royal Air Force, and only the second of the RAF’s jets following the twin-engine Gloster Meteor.

Designated in-house by de Havilland as the D.H.100, the Vampire’s egg-shaped fuselage and twin-boom structure were largely of wood-and-aluminium-construction. Most production Vampires were powered by a de Havilland Goblin turbojet. Exceptions were the 80 Vampires built by de Havilland Australia for the Royal Australian Air Force (RAAF), which were propelled by Rolls-Royce Nene turbojets manufactured under licence by the Commonwealth Aircraft Corporation (CAC) in Melbourne. Other Goblin-powered Vampires were licence-built in France, India, Italy, Sweden and Switzerland.