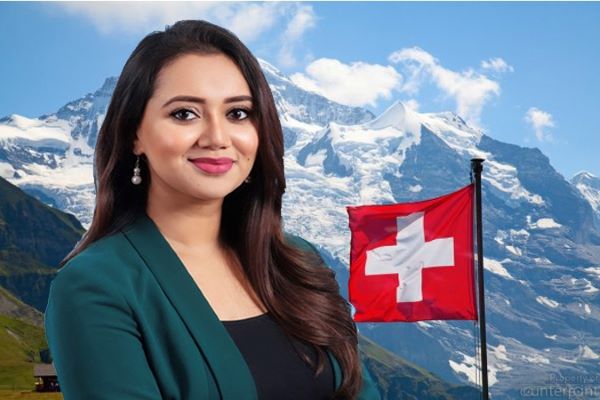 Farah Rumy, born in Sri Lanka and a past student of Bishop’s College, Colombo is set to take her place in the Solothurn Parliament after last Sunday’s election.

In 1998, Farah migrated to Switzerland with her parents, when she was 6 years old. She graduated from her internship as a Nurse and worked her way through University in Bern, earned a Master’s degree in Health Science and works as a Healthcare Specialiat in the Cardiology Unit of the cantonal hospital in Solothurn.

Farah Rumy has always been interested in intergenerational projects. As someone who has a background in health care and has worked in diverse areas, she said she has always valued conversations with older people. The “I gift a letter” campaign was one of her successful campaigns targetting older people in retirement and nursing homes to receive letters from the younger generation with personal thoughts, drawings, poems or stories to ease their difficult time and bring them happiness.

She is also the President of a non-profit and charitable organization „Restessbar“ Grenchen, a project to reduce food-waste. Foodstuff which are still in good quality are collected from different supermarkets and placed in Refrigerators in different places in an around the city of Grenchen. Those who are in need and less priviledged collect these foods for free.

To the list of impressive accomplishments, Farah Rumy reached one more amazing milestone on 7th March 2021, she became the first immigrant born in Sri Lanka to be elected to the Solothurn Parliament.

538 candidates contested the 100-seated parliamentary elections in Canton Solothurn and 23 candidates contested for the Social Democratic Party and Farah was placed in the top 5 of the list and won the Parliamentary seat with 3522 votes. This victory is more than just symbolic because she is the first Sri Lankan woman to take a seat in a Swiss Cantonal Parliament and represent not only the Swiss population but also the interests of Sri Lankans in Switzerland (COURTESY COLOMBO TIMES)