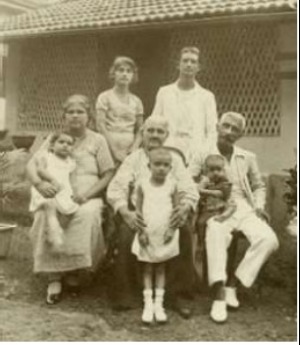 Joseph Anthony Clair Herft was born in Colombo, Sri Lanka on 15 June 1932. He was
the eldest son of eight children born to Ivan and Wilhelmina Herft, his other siblings
being Rita, Amy, Dorothy, Anne, Frederick, Bernadette and Patrick.
Dad had fond memories of his childhood playing with his siblings. As a youngster one
of his favourite past times was to climb inside an empty tyre and get pushed down the
road. This would usually end up with him getting bruised and battered from the gravel
roads. Dad also loved to play with his set of marbles. He vividly remembered the day
when he dropped the marbles on the concrete floor of their family home once too often
when his father was having an afternoon nap. His father was a strict disciplinarian and as a punishment he threw
the marbles into the canal, never to be seen again. Dad also had a pet calf which he kept at home. Once the calf
died, he made a pretend calf out of tree branches, complete with the body and head. He would walk his pretend
calf around his garden and even tie it to the post in case it pretended to run away.
Dad started school at Holy Family Convent, Dehiwala, a school run by the nuns of the Holy Order. He didn’t
really enjoy that school, as he, along with his siblings and other students feared the nuns and their disciplined
ways. Dad and his two older sisters, Rita and Amy would hold his hand as they walked about 2 miles each way
to school. Dad later attended secondary school initially at St Peter’s College and then at St Joseph’s College.
Dad’s parents ran their own private school from the family home for about 10 years. So unfortunately, for dad
and his siblings, during school holidays they also had to attend their parents’ school during their own school
holiday period.

At the tender age of 10, Dad wanted to become a priest and he entered St Aloysius
Seminary, known as the ‘little seminary for junior students’. He spent 3 years at the
seminary, only going home on school holidays. It was here that he befriended another
student named Ronald Ignatius Raymond. From that point on, Dad and Iggie were to
become best friends. Their friendship remained strong for over 80 years and grew to a
point where both families shared wonderful memories together and remain close today.
After completing senior schooling, Dad’s desire to join the priesthood was still very
strong. In 1951 he decided to join the Benedictine Order and made his way to the Monte
Fano seminary in Kandy, a large city in central Sri Lanka. After about 18 months Dad
decided that priesthood was not for him. His inability to remain silent and sit still for
long periods of time, together with his attraction to girls made this decision easy for him.
Mum and Dad married on 12th April 1958. The next seven years they raised six children,
namely Gerry in 1959, Suzette in 1960, Damian in 1962, Patrick Steve in 1963, Angelo
in 1964 and Laurene in 1965. Most of their early years of marriage were difficult as
money was scarce.
Throughout his early years, Dad held various jobs such a casual teacher as well as
teaching English to monks at the local Buddhist temple. He was a clerk at a vehicle
dealership, when he participated in a major industrial action over the withdrawing of
Christmas bonuses. Dad dressed up as Santa Claus in 35-degree heat and went in a
motorcade parade down the main streets of Colombo. The industrial action was a success
and Dad’s photo as Santa made it on the front page of the daily newspaper. However, shortly after that stunt,
Santa got sacked. Dad also did some journalism for a short period of time in the Maldives. 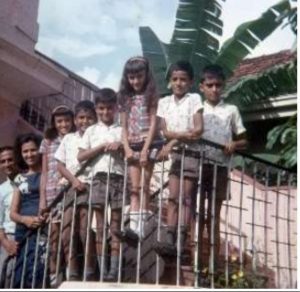 Due to Dad’s insecure nature of employment, Mum and Dad agreed that he would stay
home and look after the six children, whilst she continued to work full time. In a way,
our parents were ahead of their time as far as the wife being the main bread winner and
the stay-at-home father taking care of the children. 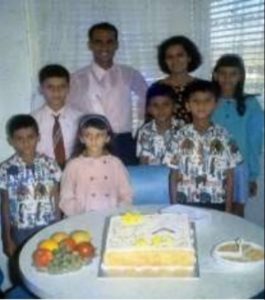 Our parents’ prayers were answered when we managed to migrate to Australia on 13
May 1972, through the generosity of family and friends. They arrived with one suitcase
and little cash and have now built a legacy of a large loving and caring family. Money
was still scarce and while we missed out on many things, we always had food on the
table, a roof over our head, clothes on ourselves and we were all educated. We could not
ask for anything more.
Dad commenced work at the Herbert Adams factory on Springvale Road. He walked to
work at 3 o’clock in the morning in freezing temperatures as there was no available public transport at that time.
He preferred to walk in the middle of the road because of his fear of dogs. 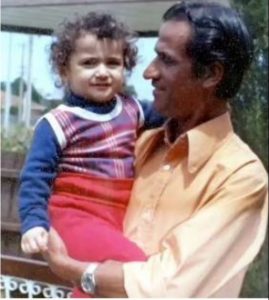 In 1973 our little brother Christopher was born. Unfortunately, our family only enjoyed
Christopher for four short years until God called him home. This was a difficult time for
Dad as he had to manage his own grief and that of his children, whilst managing mum’s
grief and the start of her ill-health. He took over the management of the household during
this period.
In 1977 Dad commenced work in the Medical Records Department at the Royal
Melbourne Hospital. His main job was to maintain the control sheet of the location of
every patient’s medical file. That would have been a huge task as it was before computer systems, and they relied
on his amazing memory to locate patient files. This gave Dad the opportunity to wander around every part of the
hospital and get to know just about everybody. Everybody was dad’s friend and wanted to chat with him. I
evidenced this myself on the numerous appointments I took him to in his later years. He managed to jump the
waiting queues, get cake and coffee at every visit, and was attended to by the very best medical professionals.
Dad used to tell us that he ran the hospital. Whilst we know he didn’t run the hospital, I’m fairly sure the hospital
couldn’t run without him. 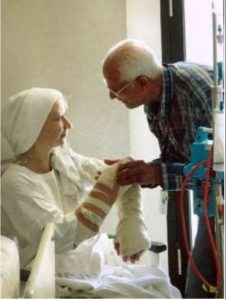 Immediately after Dad retired at the age of 60, he commenced as a volunteer in the
hospital’s pastoral care team. Over the next 25 years he would make the trip to the
hospital twice a week by public transport without failure. Over 60 kilometres each day,
twice a week, walking, catching trains and trams in inclement weather without
complaint. Dad was very dedicated to serve those in their time of need. Regardless of
their religious backgrounds, he would pray with the sick or the dying, listen to them, be
with them throughout their darkest hours and provide them a ray of light. Dad had
finally managed to live the life of service he had been called upon by God so many years
ago.
Dad’s voluntary work was recognised in 2015 when he was nominated for the Victorian Volunteer of The Year
Award. At the ripe old age of 85 and with failing health, he finally decided to retire from his role as pastoral care
worker. He received a farewell mass and lunch from many of his colleagues, including the hospital’s CEO at the
time being in attendance.
Dad’s love and loyalty to the Royal Melbourne Hospital was second to none. He spent 40 years associated with
the hospital, which he called his second home. Dad was a valued employee and volunteer and highly respected
by his colleagues and patients. A heartfelt thanks to the pastoral care team for providing the hospital flag that has
been draped over Dad’s coffin as a mark of respect. He would be so proud to be the bearer of this flag.
Dad and Mum retired at the same time and finally managed to spend some time together. They were fortunate to
travel overseas on numerous occasions and loved travelling around Australia too. They also bought their first
holiday home in Phillip Island. It was here that the whole Herft and van Rooyen clan have fond memories of our
very own Boxing Day Test matches.

Mum and Dad were blessed to celebrate 62 years of married life. We celebrated the key milestones of their 25th,
40th, 50th and 60th wedding anniversaries with extended family and friends.

Dad loved his children and grandchildren very much and took a great interest in our activities and was proud of
our achievements. 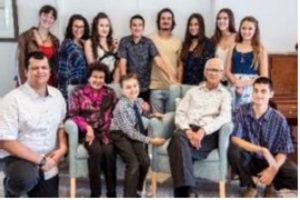 Dad loved his native Sri Lanka. He made numerous trips back to his motherland
and always looked forward to them. His two sisters and extended families loved
having him back there. They have so many fond memories of him. Dad continued
to take great interest in what was happening over in Sri Lanka and always followed
their local news and events.
Dad loved people around him. He was a social butterfly and the life of the party. He would set the room alight
whenever he entered with his jovial and mischievous nature. Dad was always the prankster, the boy who never
grew up. He would cheat at board games with his grandchildren and his nephews and nieces and was a good
storyteller too, even if he told many fibs along the way. It was his way of keeping everyone engaged and
entertained.
Dad also had a great passion for his garden, something that his children have inherited. He took great pride in
every garden he had and spent many an hour maintaining his beautiful plants. Amongst his many plants he had,
he loved his orchids and ferns. Dad loved his cricket and enjoyed playing it with his sons and watched it on
television, always supporting the teams that played against Australia. 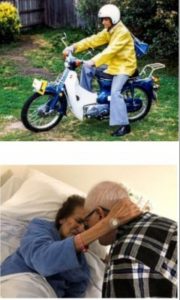 Mum wouldn’t allow Dad to get his car driver licence. So, at the age of 48 he decided to get a motorcycle licence instead. His little putt putt was his key to his social life. He rode it everywhere. Dressed in his long bright yellow rain jacket and pants, everybody knew when Clair arrived to see them. Armed with a pen and note pad in his top pocket he was always ready to get names and addresses of people he hadn’t previously met, so he could invite himself over to their house for lunch one day. Dad’s started having serious health problems 5 years ago. Around 14 months ago, we made the agonising decision to place him in an aged care facility. Whilst he was not happy with this decision, he was somewhat content when mum joined him there a short time later. Unfortunately, mum’s stay there was ever so brief, and she passed away in August last year. Dad’s health continued to deteriorate as he tried to soldier on without his lifelong partner of 62 years by his side. At 4:46pm on 15 July 2021, surrounded by some of his children, God called him home. Dad is now reunited once again with mum and finally with his beloved little boy Christopher after 44 long years. “Well done, good and faithful servant. Enter into the joy of your master.” (Matthew 25:23)