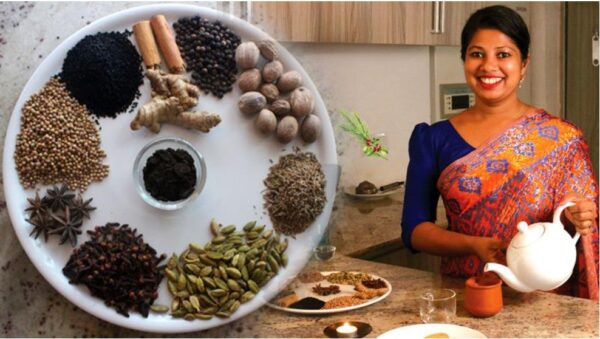 People across the globe are stricken by an unprecedented pandemic and the health authorities place high importance on enhancing the immune system of the body to successfully fight against the virus. Health experts advise that immunity of the body should be enhanced naturally with the food and drink that we take in our day-to-day life.

While some people are obsessed with taking expensive pills or syrup for improving immunity, both Ayurvedic and Western doctors advise to take food that have the capability of improving immunity naturally which creates stronger defense than the artificial immune boosters.

It is no exaggeration to state that Covid-19 pandemic turned the lives of people upside down with significant transformations in their lifestyle. Good-health guidelines are often given by the health authorities for people to adhere to. These guidelines are the easiest way to enhance and maintain a healthy immune system.

Doctors and other health experts often stress the importance of not smoking and engaging in regular exercises, having an adequate sleep, taking healthy food and drinks that help improve immunity naturally.

The foundation for a healthy immune system is the stomach. What a person puts in it can greatly determine the strength of the immune system. There are many vegetables, fruits and herbs that can help strengthen the immune system and many of them can be found in our kitchens.

Asians, especially Sri Lankans and Indians can boast of a food culture that is rich in immunity-enhancing spices. The herbs and spices that we use in day-to-day cooking also contributes to improving immunity in the body such as pepper, ginger, cinnamon, clove, coriander and saffron. are proven to do the job. Asians for many centuries have been incorporating such spices in their meals and said to have led healthy lives.

Tea is a refreshing beverage that can be consumed any time of the day. And, if flavourful and fragrant spices are added, it will certainly become a feast for the taste buds. In addition, the spices contribute to increasing the immunity of the body to fight against the viruses and other infections-causing microorganisms.

Here is a special spice tea prepared of carefully selected spices for great taste and a healthy life. Rather than sipping an ordinary tea made of only tea leaves (Camelia sinensis), milk and sugar, the flavor and health benefits of that cup of tea can be greatly enhanced if the spices are added. This tea may appear similar to Masala Chai (tea) of India yet the spices used differ from the ones that are used in Masala Chai. Indian authentic Masala tea mainly uses five spices that are, cinnamon, cardamom, cloves, pepper and ginger.

This special spice tea is prepared using ten spices that are proven to enhance the immunity of the body. As per Ayurvedic doctors, drinking spice tea is beneficial during a pandemic situation like this to keep the body in good health to fight against viruses, especially Covid-19.

This tea uses ten special spices loaded with anti-oxidants, anti- inflammatory properties, immunity boosters and many more. The spices used in preparation of this tea are, pepper, ginger, cardamom, cinnamon, clove, cumin, black cumin, mace, coriander and star anise. Two ingredients used in this tea- star anis and black cumin are not commonly used in day-to-day life. Hence, this tea is an effective way to incorporate the two spices laden with medicinal properties.

China’s Ministry of Health had once suggested people to incorporate star anise in their pork dishes during the swine flu. Star anise is regarded as one of the main anti-viral spices used for treating swine flu apart from being a popular flavor- enhancer in Chinese cuisine.

Black cumin (Nigella sativa) is said to contain over hundred nutrients and is found in Arabic Islam literature as a prophetic medicine that can cure any disease other than death. This is also known as panacea as it can be used to prevent and cure any disease. Abu Hurairah narrates as said by Prophet Muhammad about Nigella (black cumin/ black seeds) “Hold on (use this seed regularly)! Because it is a remedy (cure) for every disease except death.” This explicitly shows the importance of this spice to be used regularly during this pandemic plight and a cup of spice tea is the best way to take black seeds.

It is important to use fresh milk for this special tea than using powdered milk to retain the taste of spice tea. Make sure you use the best quality tea leaves for this as the quality of tea matters when preparing this spice tea. Attention should be paid to use the ingredients in their correct measure as mentioned above. No spice should be added too much to the tea so that it will lose the balance of flavours. Milk and water should be added in a proper proportion, if not the real taste of spice tea cannot be felt.

Mace (nutmeg) is used for enhancing all the flavours of the spices added. Hence, mace itself cannot be regarded an ingredient used for making spice tea, but rather an enhancer of flavours. However, nutmeg too has its medicinal properties.

Heat a pan and roast the spices except mace and ginger for 2-3 minutes under low heat. When the spices begin to emanate a fine aroma remove them from heat. Let them cool for a couple of minutes and coarsely pound them using pestle and a mortar. (Do not use a blender for this task as it may end up grinding the spices into a fine powder). Now finely pound the ginger and keep aside. Heat another pan and add water. When the water starts boiling add the pounded spices and boil for two minutes. Then add tea leaves and bring it to a boil.

Then add milk and constantly stir to prevent the milk from rising. When the liquid is about to rise, lift the pan from the flame so that the milk would go down again. You can repeat this step for two to three times. Finally, let the milk rise in the pan and remove the pan from the heat. Once the pan is removed from heat, grate a little bit of mace (nutmeg) to enhance the flavor. Mix well and strain. Serve this special spice tea hot. This is ideal during a rainy evening to expel the cold and to warm up the body. 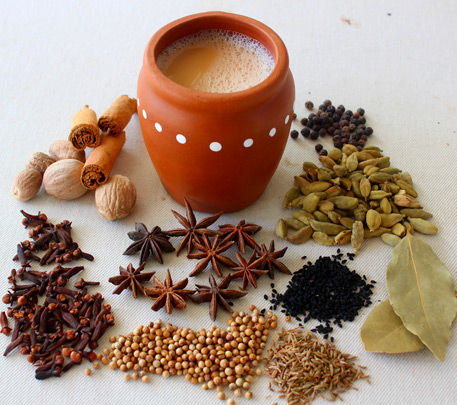