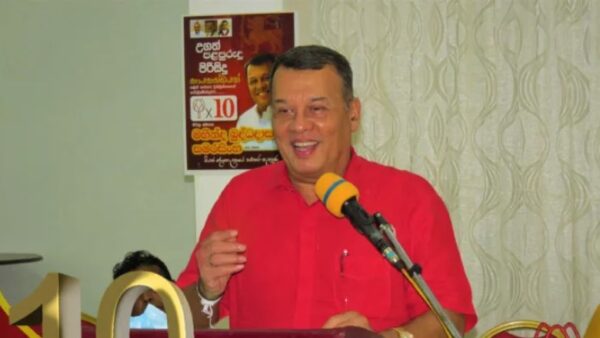 ECONOMYNEXT – Elected ruling Sri Lanka Podujana Peramuna (SLPP) parliamentarian Mahinda Samarasinghe has decided to vacate his seat and take up an ambassador post in the United States, a source close to the MP said on Saturday (18).

“He opted for the US ambassador post,” the source, who has been involved with Samarasinghe’s political career for more than a decade, told EconomyNext.

Local media, however, said he will be appointed as the ambassador for the US and Mexico. Samarasinghe was not immediately available for comment.

The ex MP was elected from the island nation’s Western coastal district of Kalutara in the 2020 parliamentary poll. He polled the least preferential votes out of the eight SLPP legislators elected to parliament.

Before his resignation, Samarasinghe was on a three month leave from parliament that was approved by the legislature. He has attended only 48 parliament sessions out of a total 93 so far held since the 2020 election.

Before joining politics, he was in the foreign service and served as the first secretary to the Sri Lanka High Commission in Australia as well as a counselor for the Sri Lankan Permanent Mission to the United Nations in Geneva during the 1980s.

Samarasinghe entered active politics in 1988 and was elected to the parliament in 1994 under center-right United National Party (UNP). He crossed over to the then government side in 2006, joining the ranks of the center-left Sri Lanka Freedom Party (SLFP).

He had served as minister of Labour, Disaster Management, Plantation, Skills Development, as well as Ports and Shilling in his parliamentary career. He, as Port Minister, signed the Chinese-built $1.5 billion Hambantota port deal to be handed over to China in 2018 on a 99-year lease.

Samarasinghe is the third SLPP legislator to resign from the parliament since July.

Already Jayantha Ketagoda resigned to make way for Basil Rajapaksa, younger brother of both president and prime minister, to become the finance minister in July. Last week, Ajith Nivard Cabraal resigned to take up the position of central bank governor at the request of President Gotabaya Rajapaksa.

Samarasinghe defected from the Rajapaksa camp after the 2015 presidential poll defeat and joined former president Maithripala Sirisena. He lost the parliamentary election later in 2015, but Sirisena appointed him under the national list.

Samarasinghe’s name was in the Wikileaks quoted by then US ambassador to Colombo Robert Blake in 2007.

The cable said Samarasinghe had expressed concern that the President and his two brothers have rendered his human rights and humanitarian access efforts ineffective and that he would not sacrifice his political career to become “part of a white wash” for the Government of Sri Lanka’s (GSL) recent human rights violations. (Colombo/Sep18/2021)