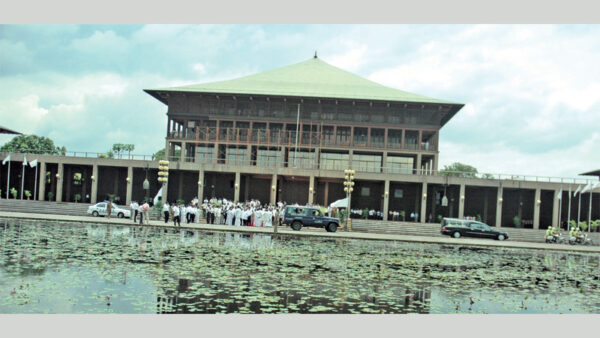 Wednesday’s election of a new President by Parliament marked an important step towards stability as the 50 vote majority received by Acting President Ranil Wickremesinghe, who polled 134 votes in the 225-member House, demonstrated the fullest backing of the legislature.

The first task of President Ranil Wickremesinghe is to arrest economic tailspin, which spiraled into political instability and a protest movement since April this year.

The new President made a welcome appeal for consensual politics at this crucial hour and it was positively reciprocated by Opposition Leader Sajith Premadasa as well as the main contender Dullas Alahapperuma.

In his recent media interviews, President Ranil Wickremesinghe urged the political parties to put aside their differences and form an All-Party Government which would allow the country to recover from the economic crisis. In an interview earlier this week with CNN, he assured the public that talks with the International Monetary Fund (IMF) were nearing conclusion. As an immediate remedy, Sri Lanka sought US$ 4 billion in aid this year from the IMF and friendly countries including India and China.

The Government has taken several steps to get over the economic and foreign exchange challenges. Although there was a delay in reaching out to IMF due to an ill-advised decision taken by the then Governor of Central Bank, Ajith Nivard Cabraal, his successor Dr. Nandalal Weerasinghe held talks with IMF within days of his appointment. “We waited too long to seek help from the IMF. If we had gone at least six months or a year earlier, it would not have come to this state,” Weerasinghe said.

He added that his aim was to stabilize Sri Lanka’s devastated economy by the end of 2023. “By the end of next year let’s start stabilizing, and certainly by 2024 let’s have a functioning economy which will start growing.”

On Wednesday, the IMF made a favourable response. IMF Managing Director Kristalina Georgieva expressed hope to complete rescue talks with Sri Lanka as quickly as possible. Speaking with Nikkei Asia in Tokyo, Georgieva said the fund was “very deeply concerned about the well-being of the people in Sri Lanka,” which has been gripped by severe shortages of fuel, food and other essentials after its foreign reserves dried up.

Georgieva vowed that “the moment there is a government that we can continue our discussions with, our team will be there.” She added that she was “very hopeful that based on the good technical work we have already done, and the fact that this technical team of Sri Lanka is there, we can complete programme negotiations as quickly as possible.” Wickremesinghe is no stranger to the IMF, as a Finance Minister and six-time Prime Minister who has had a hand in negotiations, the Nikkei report added.

Seventy three-year-old Ranil Wickremesinghe entered Parliament in 1977 and served as a junior minister, minister, opposition leader and as prime minister a record six times.”I thank Parliament for this honour,” said the new President after getting elected. He has run unsuccessfully for president twice before but secured enough votes among lawmakers despite controlling just one seat – as Leader of the United National Party (UNP).

The Parliamentarians will have an important role in getting the country back on rails. People are disgruntled with petty squabbling of political parties and before their image is tarnished beyond repair they must get their act together and think first about the country and the people rather than giving priority to the party and personnel privileges.

“Our country is facing massive challenges and we have to work on a new strategy to fulfill the aspirations of the people. Now, everyone must come together,” the new President appealed to fellow Parliamentarians.

The International community, which is extremely concerned about the rapidly developing socio-economic and political instability during the recent months, will definitely extend a helpful hand to ensure smooth transition and economic recovery. Wickremesinghe, as acting President recently negotiated with the International Monetary Fund (IMF), and enjoys a working relationship with key donor countries including India.

India has already given an assurance. “India will help Sri Lanka to stage an early and effective economic recovery,” Indian High Commissioner in Sri Lanka Gopal Baglay told the media early this week. “Sri Lanka has a central place in our neighbourhood policy and we have always stood with its people,” added Baglay. In an exclusive interview with India Today, Baglay said India helped Sri Lanka with providing essential items and by providing support for its foreign currency reserves. To that effect, India, which has helped Sri Lanka with almost US$ 4 billion in aid, would, “going forward,” like to bring in “more investment” to help the country build capacities to respond to the economic challenges, Baglay said.

Earlier this week, responding to a call by several political parties in Tamil Nadu, External Affairs Minister Dr. S. Jaishankar and Finance Minister Nirmala Sitharaman assured Indian assistance to Sri Lanka as the country is facing its worst economic crisis in seven decades, with a severe foreign exchange shortage hampering the import of essentials including food, fuel and medicines.

India has emerged as the top lender to Sri Lanka, extending USD 376.9 million worth credit compared to USD 67.9 million by China in the first four months of this year to rescue Sri Lanka. Loans from India with USD 376.9 million were the highest foreign financing disbursements during the period of January 1 to April 30, 2022, according to Sri Lanka’s Finance Ministry. After India, Asian Development Bank (ADB) came in as the second largest lender with USD 359.6 million being disbursed in the first four months, followed by the World Bank with USD 67.3 million.

The solid backing received by President Wickremesinghe is of extreme significance as the acceptance within Parliament is crucial for implementation of major decisions; especially the unpopular and painful economic reforms that are urgently needed will need bipartisan support in the House. This was the basis upon which the argument for an All-Party Government was born a few months ago, and this is an opportunity to have Sri Lanka’s first true All-Party Government and push through important legislation, which would not only help Sri Lanka survive this crisis, but also thrive in the long term.