E. M. Senanayake – from village boy to an international shooter 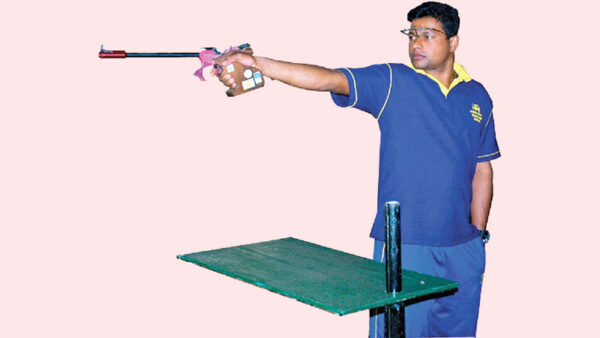 Edirisinghe Mudiyanselage Senanayake is a former Sri Lankan sport shooter, who represented the country at the 2008 Olympic Games in Beijing, China. Second in a family of five, he was born in Hasalaka, Randenigala and was educated at the Sangabodhi MV in Morayaya, a rural school in Kandy.

At the age of 38, Senanayake made his official debut at the 2008 Summer Olympics in Beijing, where he competed in two pistol shooting events. He scored a total of 561 points in the preliminary rounds of the Men’s 10m air pistol, two points behind Egypt’s Mahmod Abdelaly and finished in 48th place.

Three days later, Senanayake was placed 36th in his second event, 50m pistol, one point ahead of Czech Republic’s Martin Tenk, with a total score of 545 points.

In 1990, he joined the Sri Lanka Army and was stationed in the North and East during the war against the LTTE. After seeing his talent, Colonel Daya Rajasingha decided to place him at the Sniper Training Academy in Diyatalawa.

The overall points tally, which he collected from this event was 600 while the world champion could obtain only a total of 579 points. He collected 558 points and 564 points from these events. He also secured a satisfying amount of points at the 2005 Commonwealth Games.

Senanayake of course, never dreamt of becoming a national rifle shooter and was keen in participating in the 100m, 200m and high jump events at Inter-Schools meets.

But after joining the Army he was able to master the art while serving in the battle front in the North and East for more than seven years, attached to the 6th Singha Regiment.

Even then, it was real hard work for Senanayake at the beginning as he was unable to win at the national championships despite going through a special three-month long training programme.

But finally, he was able to taste success for the first time at an international event when he bagged the Silver Medal at the South Asian Games in Kathmandu, Nepal in 1999.

Thereafter, he made another unsuccessful attempt at the Asian Shooting Championships but he made amends by winning two Bronze Medals in the 50m freestyle pistol shooting events at the 2004 South Asian Games in Islamabad, Pakistan. In addition, he also helped Sri Lanka to win a Bronze Medal in the 10m group event at the same meet.

Thereafter, Senanayake had the distinction of representing the country at the 2006 Commonwealth Games in Australia In the same year, he performed well to win a Silver Medal in the freestyle pistol 50m event at the 2006 South Asian Games held in Colombo. He also helped Sri Lanka to secure the Bronze Medal in the 10m standard pistol team event at the same meet. But his success at the Asian Shooting Championships was a landmark achievement as this performance eventually helped him to reach the Olympic qualifying standard. (C.D)